MEPs wrote to Borrell and Schmidt, express concerns over tensions in BiH 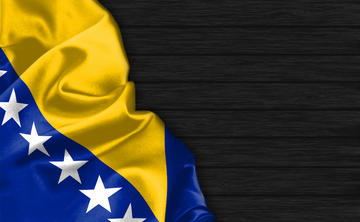 Flag of the Bosnia and Herzegovina (© nurf_designs/Shutterstock )

A group of European Parliament members wrote to High Representative Josep Borrell and High Representative for Bosnia and Herzegovina Christian Schmidt, expressing concern over the latest escalation of tensions in BiH, specifically relate to the recent concrete steps towards the secession of Republika Srpska, undertaken by the nationalist political leadership of the RS.

The MEPs said that the political landscape in BiH over the last years, and even more over the last few months, is characterized by rising tensions due to the unconstitutional illegitimate attempt of deadlocking all institutions on state, undertaken mainly by the Serb Member of the tripartite Presidency.

“The votes in the respective entity, namely the RS Assembly, announced for next week are without percent, and despite being illegal and unconstitutional as well as violating the Dayton Agreement, have the potential to generate concrete grounds for the RS leadership to pursue with their secessionist agenda and thereby endangering stability and even peace in the whole Western Balkans. If pursued continuously, tensions will mount and an armed conflict in other areas and other Western Balkan countries”, the MEPs said.

According to MEPs, votes are foreseen for the next week in the Assembly of Republika Srpska univocally violating the legal structures of BiH, concern an unconstitutional withdrawal of consent to the formation of the BiH Armed Forces, a High Judicial and Prosecutorial Council, and an Indirect Taxation Authority.

The Bonn Powers were established in 1997 as a tool to remove obstacles to full implementation of the Dayton Agreement. Their use is controlled by the Peace Implementation Council, made up of 55 countries and international organizations. The Bonn powers gave to the High Representative for BiHthe right to impose laws or to revoke those contrary to the Dayton Peace Agreement, the possibility of removing officials at all levels or even banning them from public life.

“Such votes are unequivocally violating the core legal structures on which BiH rests, including its constitution and the Dayton Peace Agreement. They are a direct threat to peace in BiH and WB region as a whole”, MEPs stressed.

MEPs underlined that the votes foreseen in the RS Assembly have the potential to endanger the stability of BiH and the region and called the OHR and EU to urge to this issue a strong and possibly joint statement condemning the vote in strong terms, as well as declaring it illegal.

“Further, we trust and expect that in the coming week, the EU and the OHR will use all possible diplomatic influence, and finally also the OHR Bonn Powers, to bring the nationalist forces in the RS political leadership to reason. We are of the opinion that clear and firm consequences must follow if such votes are held against all warnings of the EU and the US”, MEPs concluded.

See the full text of the letter (PDF).