Let's go out. Sarajevo towards its first Pride 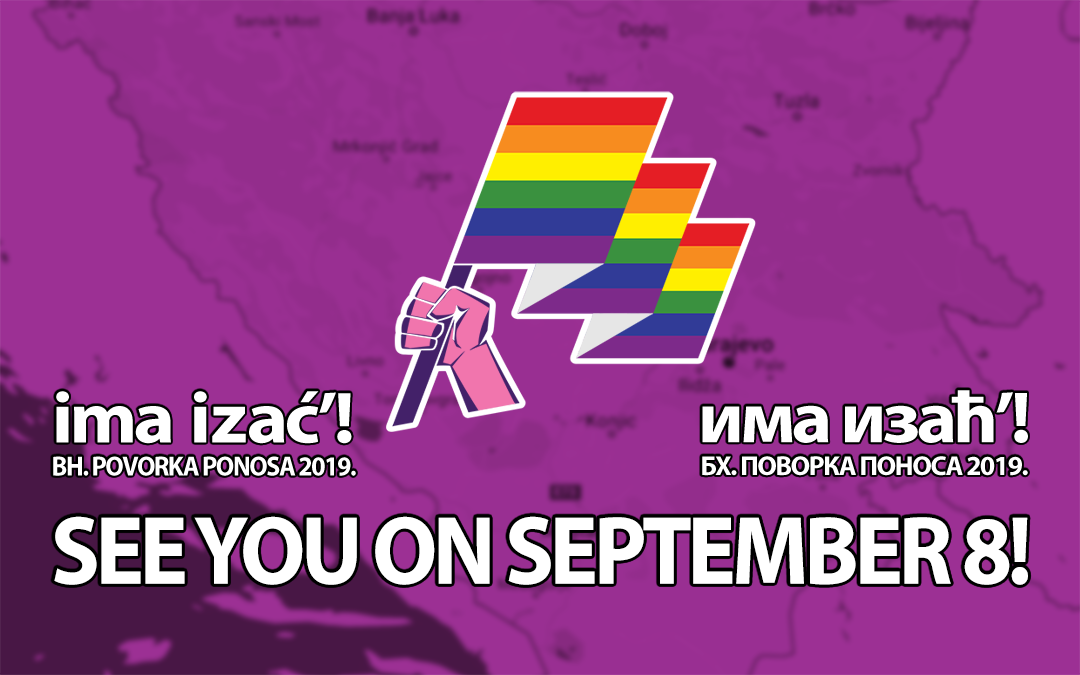 In 2008, the first LGBT public initiative in Bosnia and Herzegovina suffered a harsh aggression which caused 15 injured and the cancellation of the event. On September 8th, the opportunity is coming to overcome this trauma, with the country's first Pride

"Ima Izać" literally means "There is a way out". But in Sarajevo it is the colloquial expression used by passengers of the crowded public transport to ask the driver to open the doors. More symbolically it sounds like an invitation to take to the streets and claim freedom of expression and universal rights, in a city suspended between nostalgia for the vitality, ideal impulses, and opening to the world of the past century, and the resigned neo-traditionalist retreat that seems to dominate the present. But the expression also contains an obvious reference to coming out, the free declaration of one's sexual orientation, which in Bosnia and Herzegovina is still too often the object of intimidation, threats, and repression, in public space and in the family.

"Ima Izać" is the official slogan of an event with multiple meanings that will probably last over time: the first LGBT Pride in the history of Bosnia and Herzegovina, to be held on September 8th in the central alley of Sarajevo, winding its way from the monument of the Eternal Flame to the Parliament building through the Titova. Bosnia and Herzegovina remained the only former Yugoslav country where a Pride never took place: in North Macedonia the first edition took place last June, in Kosovo in October 2017.

The Sarajevo Pride was announced well in advance, more than five months ago, by a coordination team that includes fifteen civil rights and LGBTIQ activists (lesbian, gay, bisexual, transsexual, intersex, queer) from all over Bosnia and Herzegovina. Time was needed to carry out dissemination, create the correct communication codes, create an atmosphere of trust among the participants and, as one of the organisers explained, "prevent the administrative silences" of institutional bodies and law enforcement agencies.

Everyone, primarily information actors, is explicitly asked to pay attention to language. In the site guidelines it is recommended several times to always use the word "povorka" (march, procession) and never "parada" (parade) – a term still very often used colloquially, often in a derogatory way. "The most frequent prejudice is that it is a kind of carnival. The pride march, on the contrary, is a protest to obtain recognition and the introduction of rights", reads the first coordination committee statement , which continues:" The Pride is the expression of the need to be visible and the request for equality with other towns and cities".

After all, there is very little to parade about. In Bosnia and Herzegovina violence, threats, and discrimination against LGBTIQ people are reported with constant frequency. Even though the legal framework, at least in the basic aspects, is considered adequate – the first anti-discrimination law on the basis of gender and sexual orientation was approved in 2003, and then updated in 2009 and 2017 – the will and the means to apply it are lacking in a context of familist and ethno-religious segregation and enormous inequalities in access to public resources. There is no recognition or legal protection for same-sex couples. A glimmer of light appeared, almost surprisingly, in October 2018, when the conservative government of the Federation of BiH (one of the two entities that make up the country, the other is Republika Srpska) adopted the request to recognise civil unions. It was probably a move dictated by the desire to show the EU progress in the integration and reform process, rather than by an awareness or pressure from the bottom by the movements. However, the process of the proposal has been blocked due to the institutional paralysis that began in October 2018, the day after the political elections. Due to the disagreement between the parties, the new government has not yet been formed neither at the state nor entity level.

The years of broken glass

The legacy of episodes of violence against the LGBTIQ community, worsened by the complicit indefference of the institutions, weighed for a long time. In 2008 the Sarajevo Queer Festival, the first public event organised within the Bosnian LGBTIQ community, was assaulted by Wahhabi extremists and far-right ultras. The attack caused 15 injured, the festival was cancelled, and a climate of oppression spread throughout the city. The raid was flanked for days by a homophobic campaign by conservative media and politicians, virtually justifying the violence. The indifference shown by law enforcement agencies, judicial bodies, and institutions appeared to many as connivance towards the aggressors. The "night of broken glass"has left indelible trauma in many LGBT persons, pushing them towards individual invisibility and hindering aggregation. Similar episodes repeated later in Sarajevo. In February 2014, a dozen hooded men broke into the Kriterion cinema which hosted a queer film festival, injuring some people. In 2016, another homophobic attack took place at Kriterion, in which the attackers threatened to use explosives.

For all these precedents, and for the threats that have kept coming in recent weeks, security is unfortunately a vital topic of the Pride. The organisers have given very strict instructions, setting a single and manned entry point: a "security area" that will close at the start of the parade, at 12 on Sunday. These are necessary prescriptions to guarantee safety and deter possible hostile acts, even if they will inevitably make participation less easy and less spontaneous.

"It is going to happen"

The unknowns around the Pride are fed not only by anonymous trolls and haggard ultras of the traditionalist belly of society, but also by high political and cultural figures. On August 23rd, only two weeks before the event and almost five months after its announcement, the leaders of the party Narod i Pravda (People and Justice, Bosniak conservatives) suddenly asked to cancel the Pride, citing the usual repertoire of blaming the victim: they said that the organisers were "causing excessive risks to security" in the city and that the vast majority of Sarajevo's citizens would be against the demonstration, even if no credible poll is available. Narod i Pravda participates in the very heterogeneous coalition of the cantonal government of Sarajevo, which unites nationalist, social-democratic, and non-nationalist liberals – the latter two are in favour of Pride. The cantonal government is the body responsible for public order and Narod i Pravda expresses its Interior minister, Admir Katica. Katica recently issued peculiar statements, claiming that the Pride had not obtained any permits, that it could have been cancelled at any time, and that the organisers had made unsustainable requests to protect the route of the march, suggesting that they should pay for security themselves.

Cantonal PM Edin Forto (Naša Stranka, centre-left liberals) promptly denied these statements. The reaction of the Pride coordination was drastic. "The police guarantees security for much more complex contexts: matches, concerts, commercial events, festivals (...) it will also do so for our protest. We have had meetings with them since April. Pride is going to happen", they affirm with certainty. Meanwhile, even two anti-Pride demonstrations have been announced: one – promoted by a cultural association of the Bosniak conservative sphere – should be held on September 7th, following the very same path as the LGBTIQ march; another – promoted by traditionalist theologian Sanin Musa – is planned at the same time of the Pride, but in the Ciglane district, several hundred metres from the Pride route.

Several observers have called the Pride a "test" for Bosnia and Herzegovina in many aspects: the status of civil rights, the protection of freedom of expression, the credibility of institutions, civil reaction – or inaction – of the population. The 2008 accidents are one of the many traumas never elaborated in the recent history of this country. The outcome of the march, whatever it may be, will be its overcoming: it will create a new condition and bring back thousands of people out of invisibility. As stated by Lejla Huremović, one of the organisers: "We live here, we pay taxes, every day we give our contribution to this country. The constitution grants us the right to demonstrate, take to the streets and fight for our rights".