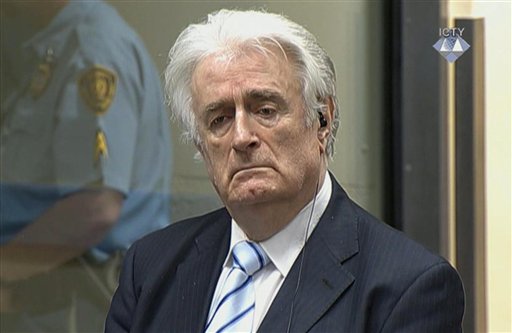 Genocide, persecution, extermination: Radovan Karadžić was finally found guilty and sentenced, though parts of the ruling disappoint the victims

The verdict disappointed both the victims and the defence. Vasvija Kadić, of the association Mothers of Srebrenica, described the conviction of Radovan Karadžić to 40 years rather than life imprisonment as "shameful" and "offensive". Milomir Savičić, president of the association of veterans of Republika Srpska, called the verdict "unfair", while defence lawyers were announcing an appeal.

Too many years have passed, and war narratives are already established, and diverging, in a country where everything, starting from the education system, is divided. It was therefore to be expected that everyone would feel strengthened in their views by the words of judge O-Gon Kwon, whatever they may have been.

Those words, however, were sufficiently clear. The former Bosnian Serb leader has been convicted of genocide, persecution, extermination, murder, deportation, and terror against a backdrop that reconstructed the 1992-1995 years remembering the tens of thousands of people detained in concentration camps, killed, and driven from their homes.

Yet, the charges of genocide did not hold in other areas of Bosnia and Herzegovina than Srebrenica, namely in the seven municipalities of Ključ, Sanski Most, Prijedor, Vlasenica, Foča, Zvornik, and Bratunac. According to the Court, genocide was committed only in July 1995, in Srebrenica, but the Bosnian Serb leadership had not had a genocidal plan against the Bosniak population since the beginning of the conflict. Or at least, this could not be proved in Court.

This is the part of the ruling which has been most criticised by survivors and the victims' associations. Munira Subašić, president of the Mothers of the Srebrenica and Žepa enclaves, said that what mattered was not the length of the sentence, but the precise reconstruction of what happened, regretting that the prosecutors did not succeed ni presenting enough evidence on the existence of that genocidal plan since 1992.

Karadžić, who had asked for acquittal, listened passionless to the judgement.

In the over five years of trial, during which almost 600 people testified, his version of events and that of prosecutor Alan Tieger have remained at odds. The story of a man who in Yugoslav times had only risen to the headlines for some little scam, before turning into an ultra-nationalist extremist, threatening the Muslim people of "extinction”, remains mysterious.

Many have tried to explain such a transformation with the frustration of a country boy who, once in the city, developed a pathological resentment of Sarajevo's "gradska raja", the urban cultural elite that had not sufficiently appreciated him. Yet another boy from a remote village in Montenegro, not far from the one where Karadžić was born in the same year, 1945, Marko Vešović, made a different choice, remaining in the besieged city and continuing to write his verses, among the most beautiful in the literature of this region.

Abdulah Sidran, another great Sarajevo poet and writer, has spoken of his own and Karadžić's generation as one "whose fate was in the hands of the fathers", forced to follow in the footprints of those who had preceded them. Karadžić, the son of a member of the Chetnik movement during the Second World War, would be one of the many examples.

After the verdict, is that karma interrupted? Sentences can talk to societies, but cannot reshape them. The former psychiatrist succeeded, to a great extent, in destroying that “gradska raja”, the Bosnian society that existed especially in large urban centres such as Sarajevo, Tuzla, Mostar, Zenica, and Banja Luka before the war.

Different layers, cultural, political and religious, through centuries had contributed to the formation of a rare identity. An unimaginable society in today's Europe, which at most conceives integration as the adaptation to the narrative of the majority. In Bosnia, it was something different. E pluribus unum, celebrating both Christmas and Bajram, possibly in the very same family. The context was one where social relationships "did not allow us to think that war was possible", as written by the Sarajevo journalist and diplomat, Zlatko Dizdarević.

Today, most of this is gone, largely thanks to Radovan Karadžić, whose nationalist paranoia, in 1992, had one more asset: the army of Slobodan Milošević, that intervened immediately, from the spring of that year. That it was a genocide or not, that of 1992, described in depth by the judges as persecution, extermination, murder, deportation, and terror, to a great extent is a matter for lawyers and jurists.