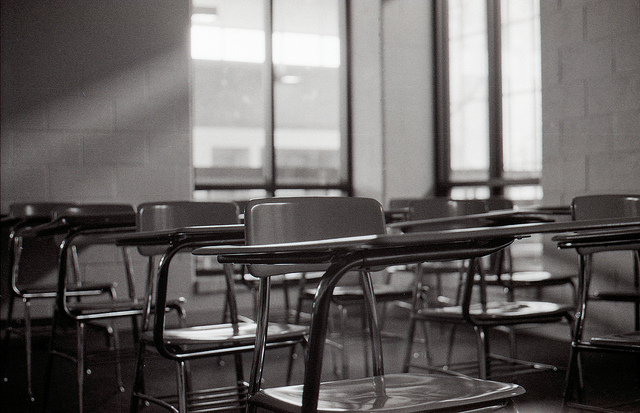 Tens of Bosniak families have withdrawn their children from the schools they were attending in Republika Srpska. They demand their children be taught their own national subjects. Our report

For over twenty days, about forty people - families with their children – have improvised a tent city at the beginning of Zagrebačka ulica, in front of the headquarters of the Office of the High Representative (OHR). There is a kitchen, where they prepare their everyday meals. And then there are curious passers-by, politicians, reporters, people who just come up and say: “I was born in Konjević Polje too”, sipping coffee and offering their solidarity.

All in all, things have turned out quite well for the occupants: the harsh Bosnian winter remains just a threat, for the moment. Sarajevans still walk around in their t-shirts and for the children, “this situation is not so bad”. So explains to us Muhizin Omerović, one of the leaders of the protest. “We are from the countryside, they have never seen a city such as this. True, they are not attending school, but this does not mean they cannot use their time away by doing something equally constructive: we have already seen a ballet, we have been to the zoo, to visit other schools in Sarajevo, monuments. We parents take turns in being their guide”.

Do they not miss school? “Of course they do. But this is a necessary sacrifice: this fight is above all for them”.

It all started in February, when the families of Konjević Polje gathered to protest against the administration of the local “Petar Kočić” school because of the lack of running water in the school. A technical problem due to the cracks in the water network. The problem was solved in September, just in time for the beginning of the school year. By then, however, the mobilization of the families had reached a whole new dimension.

Konjević Polje is a small town on the road leading to Bratunac and thus Srebrenica. The area was stage to a highly violent ethnic cleansing during the '90s war. Today, between an estimated 1,000 and 2,000 people live here, all Bosniaks (Bosnian Muslims) returned after the end of the conflict.

Though in the past Konjević Polje was raised to the honors of the news for cases such as that of Fata Orlović, whose land was expropriated to build an Orthodox church, according to the villagers the place sets a virtuous example from the point of view of refugees returning. Indeed, after the war many decided to come back here, to their hometown, and they get by thanks to agriculture and by selling their products, especially in the summer, on the road from Zvornik to the coast, filled with thousands of people during vacation time.

The mobilization that has led to the boycotting of the start of the school year began when the families started claiming a level of importance, in grade school, in line with their demographic presence in the area. The paradox, indeed, cannot go unnoticed. It is, moreover, worsened by the complicated school structure of Bosnia Herzegovina. In a municipality where 100% of the population is Bosniak, teaching goes according to the Serbian ministerial curriculum. Students have a right to study the subjects of their own national group (namely, history and language) according to the curriculum decided by the Tuzla Canton only from their 6th year onwards. From the 1st to the 5th year, classes are taught in Cyrillic, according to the subjects and books decided in the Republika Srpska.

“This is unacceptable”, Omerović summarizes to Osservatorio. “We asked for the name of the school to be changed. I have nothing against Petar Kočić, but he is not a Bosniak. We also demand that our national subjects be taught and that teachers be of our same nationality. The present teacher, who should teach Bosniak, speaks Ekavian [editor's note: a variety of the languages of the Southern Slavs, widespread in Serbia] and she is Serbian. Unbelievable!”

The families of Konjević Polje decided to boycott the beginning of the school year starting from the first day of classes. Children will not be going back to school until these issues are settled. And they are not the only ones. The same situation of Konjević Polje is taking place in Kotor Varoš also.

At the end of September, the families of Konjević Polje met with the Republika Srpska Minister for Education, Goran Mutabdžija. A mediation, however, was impossible to reach. There is no legislation regulating the subject definitely; it is thus necessary to refer to a memorandum signed in Banja Luka in 2002 by the representatives of the Federacija BiH and the RS, the two entities that make up Bosnia Herzegovina. Only classes with at least 18 students belonging to a minority group are entitled to the teaching of national subjects. The classes in Petar Kočić school do not have enough children from the 1st to the 5th classes. Even if number requisites were met, though, the Minister for Education would have no obligation: the choice of introducing national teaching would be discretionary.

Having clarified this, the solution proposed by Mutabdžija is a compromise that does not meet parents' satisfaction: adding lessons, outside the school hours, for children between the 1st and the 5th classes. “Unacceptable”, Omerović cuts short. “We want our children to exercise these rights in their school, regularly”.

Having reached a dead end, in October the families moved to Sarajevo, setting up their tents and demanding the OHR intervene. However, the High Representative, Valentin Inzko, does not seem too inclined on making a statement on the issue. In a meeting with the families, he suggested they “turn to the OSCE, as they have more staff. This problem does not fall under our range of competencies”.

This position was reinstated to Osservatorio by Inzko's spokesman, Eldar Subašić, who underlines how “For the OHR, the controversy can be settled only through an agreement between the parties”.

Therefore, no solution will be imposed from the top. The moral is simple and sounds more or less like a 'settle this between the two of you'. Among the camping families, everyone tries to play the failed meeting with Inzko down: “We're going to have to move the tents in front of the OSCE”, they smile.

In the meantime, time goes by. A solution will have to be found before November 25th, as underlined to Osservatorio by Savo Milošević, Petar Kočić's director. “Otherwise, according to the law, the children will have to be failed this year”.

Milošević has tried to tackle the issue in the most pragmatic way possible. “Even though - he underlines disheartened - with my last name, this is certainly not easy”. According to him, the entire issue is simply the first act of the campaign in Bratunac in view of the next elections. “Omerović is a close collaborator of Duraković's, the mayor of Srebrenica. He is a smart man and I would not be surprised if he were trying to pave his way into being elected to the Republika Srpska National Assembly, running with the SDA. The law on the school's curricula is clear and I cannot do anything about it. We commenced procedures to change the school's name, but it is going to take time. It is bureaucracy. I really do not know what to do with the families, they have not been collaborative”.

According to Milošević, in its own way the issue of the language is illustrative: “Our teacher of Bosnian language has all the necessary qualifications, in line with the law, to also teach in the Tuzla Canton. The only problem is that her name is Mirjana. She graduated twenty years ago, when Yugoslavia still existed, in literature and Serbo-Croatian language. What should I do? At the time, there was no teaching Bosnian, you could not graduate in Bosnian”.

Once again, an eyeball to eyeball confrontation has been chosen in Bosnia Herzegovina. The decisive date of the 25th of November might mean a break through.