A Stronger Europe in Sarajevo 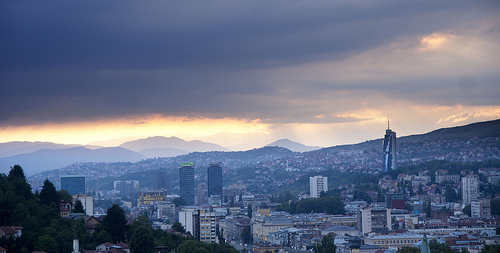 The political crisis in Bosnia and Herzegovina, the country's European path and the attempts at much-needed constitutional reform. Our interview with Paola Pampaloni, Head of the BiH Unit of the European Commission's Enlargement Directorate

The workshop “EU Enlargement and State-Building in the Balkans: a comparative analysis. What future for Bosnia & Herzegovina and Kosovo?”, organised by the French association Bourgogne Balkans Express, took place in Dijon April 10th through 12th, 2011. The meeting was attended by representatives of European institutions, students, experts, and researchers from some of the main media and research centres working on the Balkans and on European enlargement. The results will be collected in a document to be presented to the European Commission. Osservatorio took part in this year's edition, which focused specifically on Brussels' role in Bosnia and Herzegovina and Kosovo. Between meetings, OBC interviewed Paola Pampaloni, Head of the BiH Unit of the European Commission's Enlargement Directorate.

There has been a lot of discussion these days about the many international actors operating in Bosnia. Many believe Brussels should be ready to take on a leading role in the country. Is the EU ready?

Not only is the EU ready, but it has had a crucial role in Bosnia and Herzegovina since the Stabilisation and Association Agreement was signed in 2008. The OHR currently supervises the implementation of the Dayton Agreements, while the Commission mostly deals with the integration process. The conclusions reached by the Council of Ministries of Foreign Affairs in March set the Union's future strategy: to strengthen its presence in Bosnia and Herzegovina through a Head of Delegation in Sarajevo, who will take on the role of EU Special Representative.

The Bourgogne Balkans Express association was founded in 2005 by a Serbian student and an Albanian student of Dijon's Campus for Central and Eastern Europe, Faculty of Political Sciences, University of Paris. Since then, it has organised conferences and exchange programmes with the goal of raising the French population's awareness of Balkan issues. This was the fourth annual international workshop organised in Dijon. As usual, the results of the debate will be collected and published on the European Commission's website. Former publications can be consulted at:

When is the Head of Delegation going to be nominated?

The selection process is taking place and will be concluded within the next few days. We hope that, by summer, perhaps even before, we will be able to create [in Sarajevo] a strengthened EU office with a wider range of tasks.

We plan for a clear distinction of roles. Our strengthened office in Sarajevo will deal with all those sectors that are considered essential for European integration. After a transition stage, the OHR will leave these sectors for the EU to lead and monitor.

Will the EU's strengthened role in Sarajevo involve some form of executive power over local politicians, like the High Representative's so-called “Bonn Powers”?

Absolutely not. The EU will not have executive powers or Bonn powers. The EU policy, and namely the enlargement policy in Bosnia and Herzegovina, is based on the country's complete ownership of the adoption laws and programmes. What we intend to do is to accompany this process through technical assistance and with our financial programme. With the help of other General Directorates and experts in different sectors of the acquis communautaire, we intend to support the country's ministries and agencies in adopting laws that fit the European framework.

The EU, together with the US, played a pivotal role in the so-called Butmir talks – an attempt at constitutional reform that failed due to local politicians' opposition. Is the EU considering the possibility of negotiating a second round of talks, a sort of Dayton 2, in order to relaunch the reform process in Bosnia and Herzegovina?

There is no intention, on the EU's side, to repeat the Butmir process. Those talks produced a text that remains on the local politicians' table – a Constitution that, according to the US and us, could have been a good compromise for all political forces. What we ask is for the dialogue to continue, also – but not necessarily – on the basis of this text. Such dialogue, though, needs to be a domestic process. We keep providing advice and support from the outside, but the process is up to local authorities.

Dijon's meetings were opened by a conference-debate on the situation of the Western Balkans 20 years after the declaration of independence by Slovenia and Croatia. Charles Paradis, president of the France-Balkans Economic Council in the French Business Association's international department (Medef International), and Jean-Arnault Dérens, editor-in-chief of Le Courrier des Balkans, approached the issue of stability in the Western Balkans from different perspectives.

Listen to the speech by Charles Paradis (FR)

What are the main obstacles keeping BiH from applying for EU membership?

The Council of Ministries of Foreign Affairs in March clearly stated the conditions for Bosnia and Herzegovina to be a credible candidate country. First, Bosnia needs to comply with the Strasbourg Court sentence on the Sejdić-Finci case by modifying the necessary articles in the Constitution. Second, the country needs to adopt the law on State Aid to Business, one of the obligations in the interim agreement [signed together with the SAA], which it has violated. When these two conditions are met, Bosnia's application will be able to be considered by the member States.

Bosnian citizens no longer need a visa to travel to EU countries. Can we regard this measure as permanent?

There is currently no reason for concern. It is important, however, that local authorities keep respecting the commitments made when the Commission suggested visa liberalisation. Many measures are expected to be taken in 2011. We understand a degree of delay, since some institutions have not been established yet. It is up to local authorities, however, to make it so that the decision will not be reversed. The Commission's first report to member states on the visa road map is going to be issued in June.