What the Balkans think about climate change

Gabrovo: innovation through the dialogue between academia and business 04/09/2022 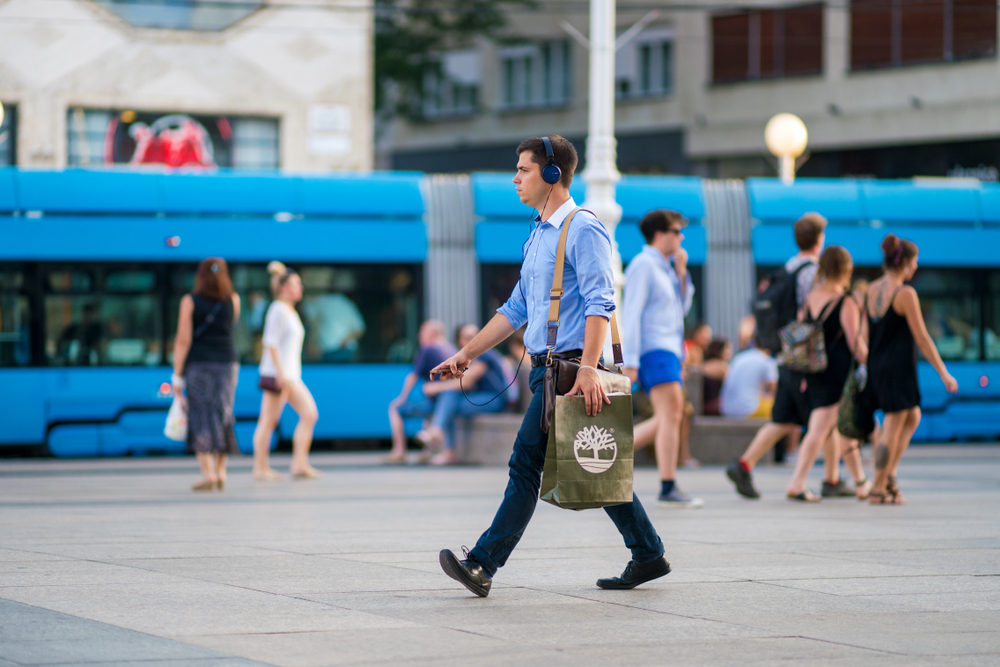 On Eurobarometer we find all the data on the opinions of European citizens on climate change. In the Balkans, as in the rest of Europe, few think that citizens themselves can be the key to virtuous dynamics

The pandemic first and the energy crisis then have gotten most of our attention lately. However, climate change remains an equally important cross-cutting and daily topic of discussion. As also highlighted in a previous article, the European Union has placed the solution to the problem of climate change at the top of its economic and political agenda. But what do the countries of South-Eastern Europe who are members of the EU think about this issue?

This article presents some figures that summarise the perception of issues related to climate change by the populations of Bulgaria, Cyprus, Croatia, Greece, Romania, and Slovenia. All the data are taken from the Eurobarometer report on climate change (2021).

Of the 390 billion Euros funding cohesion policy in 2014-2020, over 52 were allocated to actions and projects with a potential impact on environmental sustainability (here the data), including 9 in South-Eastern Europe. For the 2021-2027 period, the European Union has decided to allocate 30% of the European Regional Development Fund (ERDF) and almost 40% of the Cohesion Fund (CF) towards objectives compatible with its climate agenda.

What are the most pressing issues?

For 18% of European citizens, climate change is the most serious and urgent problem that the world as a whole has to face. Poverty, hunger, and lack of drinking water follow with 17% and the spread of infectious diseases with the same percentage (17%).

These averages are the result of very different opinions within the states of the European Union. In fact, if we look at the top of the list, we first find the Nordic countries: for example, 43% of Swedes and 35% of Danes believe that climate change is the most urgent problem to tackle. The Balkan territories, on the other hand, are all placed in the lower part of this ranking (Table 1): in general, only one person out of 10 thinks that the most serious problem to be solved right now is linked to the climate issue. At the bottom of the ranking we find Bulgaria, with only 5% of the population ready to believe that the most pressing issues are the phenomena connected with climate change. By way of comparison, Italy has also been included in the infographic, with 7%. 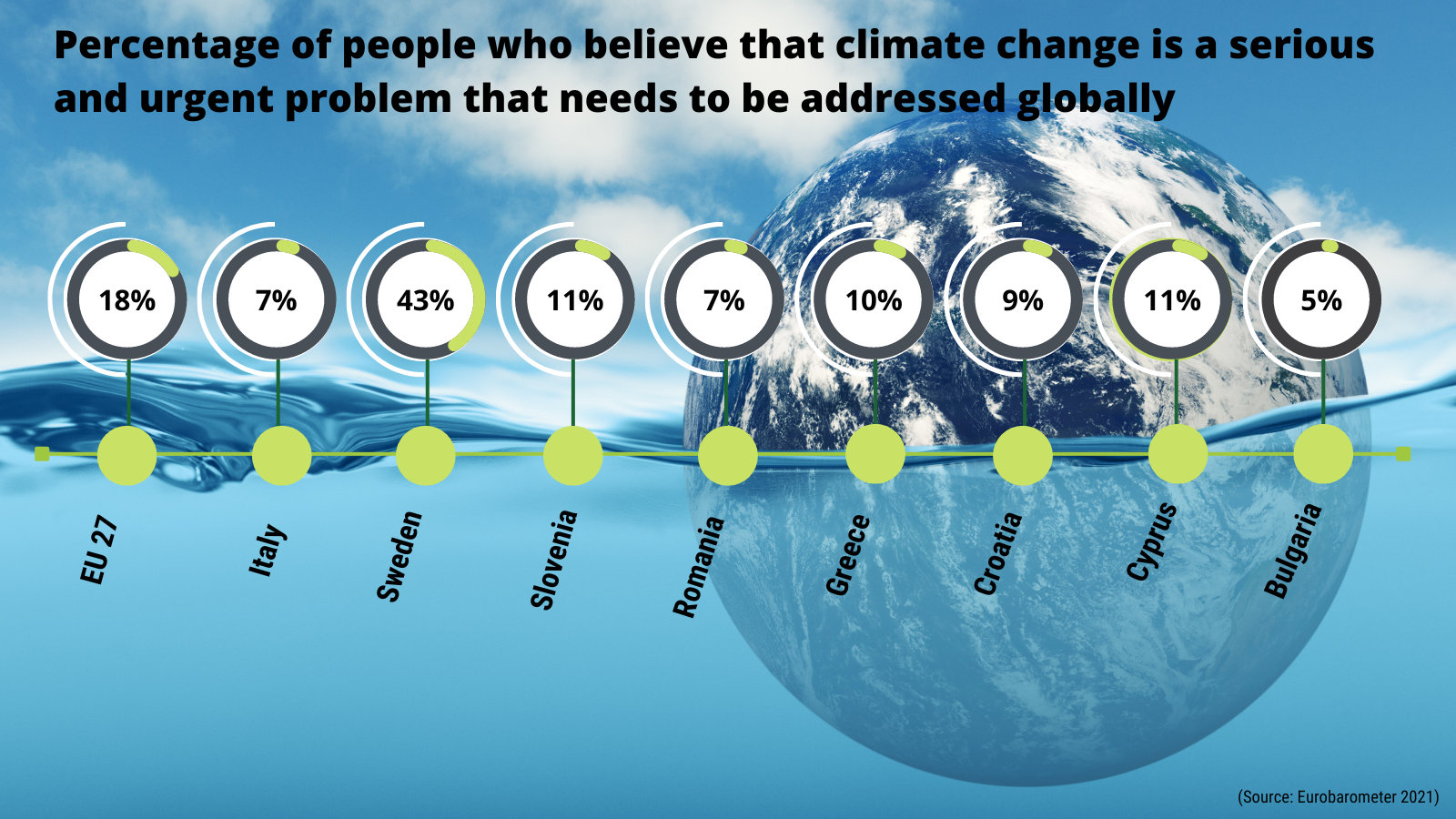 Within the six individual countries taken into consideration, the problems regarded as most unavoidable are: the economic situation for Greece (28%); poverty, hunger, and lack of drinking water for Cyprus (21%) and Slovenia (18%); the spread of infectious diseases for Bulgaria (36%), Croatia (29%), and Romania (23%). The latter is somewhat understandable as the answers were collected between March and April 2021, when public attention on the Covid-19 pandemic was still high. The same goes for Italy, which could explain the low percentage of people who believe the climate issue is urgent.

However, 78% of European citizens consider the climate problem to be a very serious issue and one that needs to be addressed as soon as possible. For Cypriots and Greeks this percentage rises to 89% and 84% respectively, while it drops to 66% for the Romanian population.

Who should intervene first?

When respondents were asked who should intervene with specific actions to combat the phenomenon of climate change (multiple answers possible), at European level we note the prevalence of the opinion that national governments should first of all undertake such actions (63%), followed by businesses and industries (58%) and the European Union as a whole (57%). 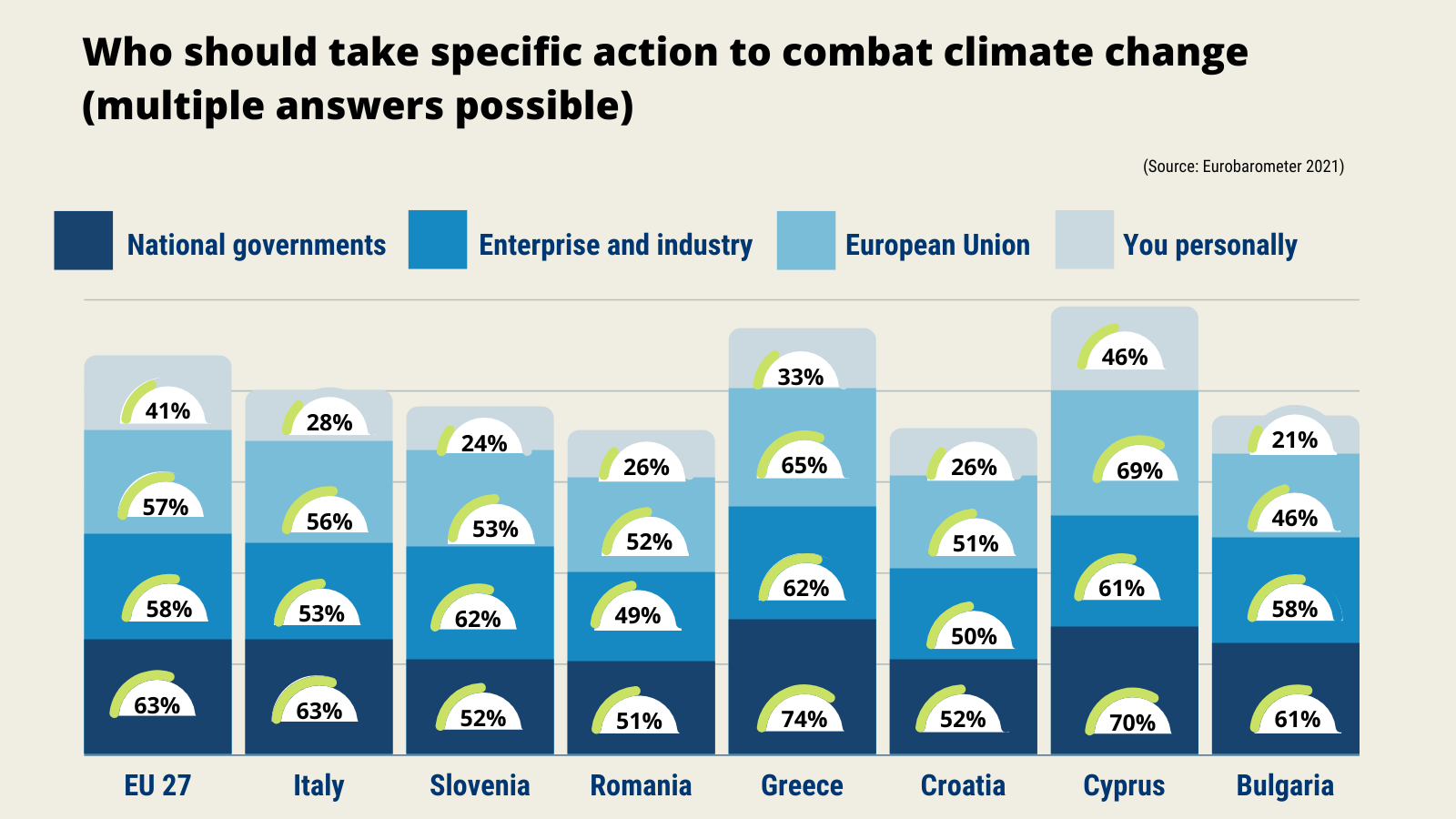 The graph above shows that in this case the opinions of the Balkan peoples do not differ much from the European averages. It is only worth mentioning Greece and Cyprus, where the opinion prevails (three out of four citizens) that it is the responsibility of individual national governments to find a solution to climate change. Finally, with the exception of Cyprus, in all the countries considered only one person out of four believes that individual responsibility can play a fundamental role in combating the phenomenon of climate change.

The synthesis of the data reported in this article shows that the perception and awareness of the risks associated with rising temperatures are not equally distributed. In general, the populations of the Balkan countries seem to lack sensitivity towards the issue (Table 1). In almost all the states of the European Union, individual actions are not seen as the primary key in order to stop, or at least slow down, the progress of climate change.

Of the 390 billion Euros funding cohesion policy in 2014-2020, over 52 were allocated to actions and projects with a potential impact on environmental sustainability (here the data), including 9 in South-Eastern Europe. For the 2021-2027 period, the European Union has decided to allocate 30% of the European Regional Development Fund (ERDF) and almost 40% of the Cohesion Fund (CF) towards objectives compatible with its climate agenda.