The EU rewards the Balkans

Astypalea, the first ‘smart & sustainable island’ in the Mediterranean 13/09/2022 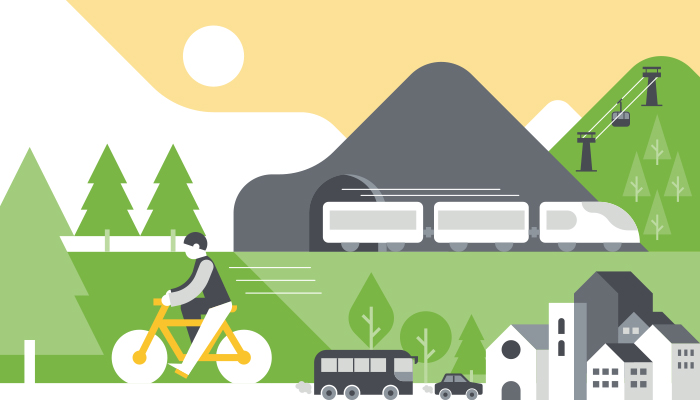 Various initiatives for sustainable mobility in Europe have been launched in the Balkans, and more will follow. A report

In recent years, the European Union has been paying a lot of attention to sustainable mobility. This can be seen in the magnitude of funding, the conspicuous number of proposals and programs, and the intensive legislative activity. Currently, the EU is particularly focused on multimodality, or the use of multiple forms of transport for a single trip. Multimodality is one of the methods which can contribute to the decarbonisation of transport: for example, taking part of a journey by rail, which might have been taken by car, or using collective and/or shared solutions instead of private modes of transport. Violeta Bulc, the European Commissioner for Transport, has named 2018 “the European year of multimodality”. The Commission will therefore aim, on multiple levels, to ensure that such principles find ever more effective realisation within the EU’s transport system.

European year of multimodalityIt’s a busy schedule, with various initiatives taking place in the Balkans. It began on March 20th in Sofia, with the High-level Conference on European Multimodal Freight Transport, which brought together professionals in the industrial sector. From April 25th to 27th, member-state ministers, MEPs, and stakeholders in the sector met in Ljubljana for the TEN-T Days Connecting Europe event (TEN-T stands for Trans-European Network – Transport, the backbone of which is represented by the nine principal infrastructure corridors of the EU).

On the 14th and 15th of May, it will be Nicosia’s turn, when they host the 5th European Conference on Sustainable Urban Mobility Plans (SUMP). The conference represents a decisive moment for the many actors involved in implementing SUMP, the package of general principles, guidelines and best practices with which the EU directs European municipalities towards the drafting of modern and sustainable urban transport plans. There are major expectations this time round, considering that the 2017 SUMP conference in Dubrovnik had 450 participants.

The European Parliament's research services constantly monitor European policies on sustainable mobility to assess their effectiveness and impact. In March 2018 the EP published an assessment on the Commission and Council proposal to amend the Promotion of Clean and Energy Efficient Road Transport Vehicles Directive .

The EuropeanMobilityWeek Award and the SUMP Award

In recent times, the Balkans have become important protagonists on the issue of sustainable mobility, not just because of the sizeable ‘green’ gatherings, but also for substantive accomplishments in the region. This is evidenced by the fact that, this year, Igoumenitsa in Greece, and Turda in Romania, have won two of the three prizes that the European Commission awards to the “most sustainable” cities in the EU: Igoumenitsa – 25,000 inhabitants, situated along the northwest coast of Greece, in the Epirus region – was awarded the EuropeanMobilityWeek Award for smaller cities; and Turda – a small city in Transylvania with 55,000 inhabitants – was awarded the 6th SUMP Award. The prizes were awarded in Brussels on March 21st by the Commissioner for Transport and the Director General for Environment, Daniel Calleja.

The EuropeanMobilityWeek Award is given to the city which, during EuropeanMobilityWeek – a campaign which takes place every year between the 16th and 22nd of September – most effectively promotes the concept of sustainable urban mobility among its local population. It’s an increasingly active campaign (with more than 2,500 participants last year), which gives European cities an opportunity to test concrete and sustainable measures for alternative transport, and obtain feedback from inhabitants. In 2017, EuropeanMobilityWeek was dedicated to the theme of Clean, shared and intelligent mobility.The SUMP Award, on the other hand, goes to the city which plans its future mobility in terms of sustainability, developing a transport plan which puts to work the recommendations of the SUMP package (it should be noted that the acronym SUMP indicates both the guiding actions/concepts of the Union in regard to sustainable urban planning, and transport plans which cities can then realise by adhering to the EU’s suggestions). Every year, the SUMP Award highlights a specific aspect related to sustainable planning.

Igoumenitsa, first winner of the prize for ‘small sustainable cities’

Igoumenitsa was awarded the EuropeanMobilityWeek Award for smaller cities for managing to put convincing initiatives into action on a broad geographical scale, involving not only the inhabitants of the city and its immediate surroundings, but also those of neighboring towns. Measures such as free bus transport during certain times of day, cycling events along the coastal edge of the city, natural-cultural excursions, not to mention a photography competition on social media for the best photograph portraying sustainable mobility by bicycle, earned Igoumenitsa high praise.

The city is also noteworthy for its educational activities aimed at primary schools (seminars, exhibitions), through which even the younger residents can learn about the benefits of sustainable mobility – including the positive health benefits.

The award given to Igoumenitsa is new: previously, only the bigger cities in Europe could compete for the EuropeanMobilityWeek Award. Starting this year, however, the category for large cities (awarded to Vienna this time round) has been supplemented with a category for cities with fewer than 50,000 inhabitants.

Turda was awarded the 6th SUMP Award thanks to clear, long-term planning, consisting of concrete measurable objectives, supported by credible financial backing. The city prevailed over competitors of much larger dimensions, such as Milan and Manchester.Above all, Turda is noteworthy for its advanced proposals concerning the sector of shared mobility, proposals which appear all the more ambitious and well structured, given the relatively small dimensions of the city. In concrete terms, the city’s initiatives are as follows: complete asphalting of roads; provision of cycling paths; car and bike sharing, also in electric versions, and making sure stations are in decent locations; a unique card for bike sharing and bus transport; introduction of electric buses; reduction of transport costs; modernisation of the largest thoroughfares for public transport, and restructuring stations; complimentary car pooling and smart parking projects; introduction of a super tax for polluting vehicles.The expected results are as ambitious as the plan itself: it is estimated that seven residents in ten choose alternative transport. But reducing the use of private vehicles will not be easy.

Turda was also awarded for the strongly participative character of the planning process. Every project was in fact conceived with the ample involvement of local residents, who took part in periodic meetings and public assemblies. The city also developed a solid financial plan, making use of both municipal funds and the European Regional Development Fund.

Beyond its intrinsic value, the proposals formulated by Turda are praiseworthy because they can be easily replicated. The city has thus been highlighted as a hypothetical model of inspiration for cities of similar dimensions. Finally, not to be overlooked is the fact that Turda participated in the TEN-T 2017 funding proposals, to obtain finances for projects aimed at integrating the city into four of the nine multimodal transnational corridors of the EU.

Although sustainable mobility is still far from being fully realised within the EU, the signals emanating from Igoumenitsa and Turda are encouraging: European cities, in the Balkans too, are becoming more sustainable – medium and small sized cities especially (competing with Igoumenitsa for the EuropeanMobilityWeek Award for smaller cities was Tivat in Montenegro).As emphasised by Bulc during the prize-giving ceremony, it is to be hoped that the winning city serves as a stimulus for other small cities in Europe. Only the continuing emergence of good examples can render sustainable mobility a reality, making the locales of our everyday lives not only clean (atmospheric pollution – caused in large measure by road transport – remains the biggest environmental risk factor for health in Europe), but also more pleasant, both to visit and to inhabit.

For willing cities there is no lack of European funding: looking at only the largest initiatives, it is enough to consider that for the period between 2014 and 2020 the resources deployed by Horizon 2020 and CEF (Connecting Europe Facility, which provides financial support to member states for the improvement of transport, energy and telecommunication networks) amount to more than 950 million euro.

The European Parliament's research services constantly monitor European policies on sustainable mobility to assess their effectiveness and impact. In March 2018 the EP published an assessment on the Commission and Council proposal to amend the Promotion of Clean and Energy Efficient Road Transport Vehicles Directive .