Remembering the conflicts of the nineties 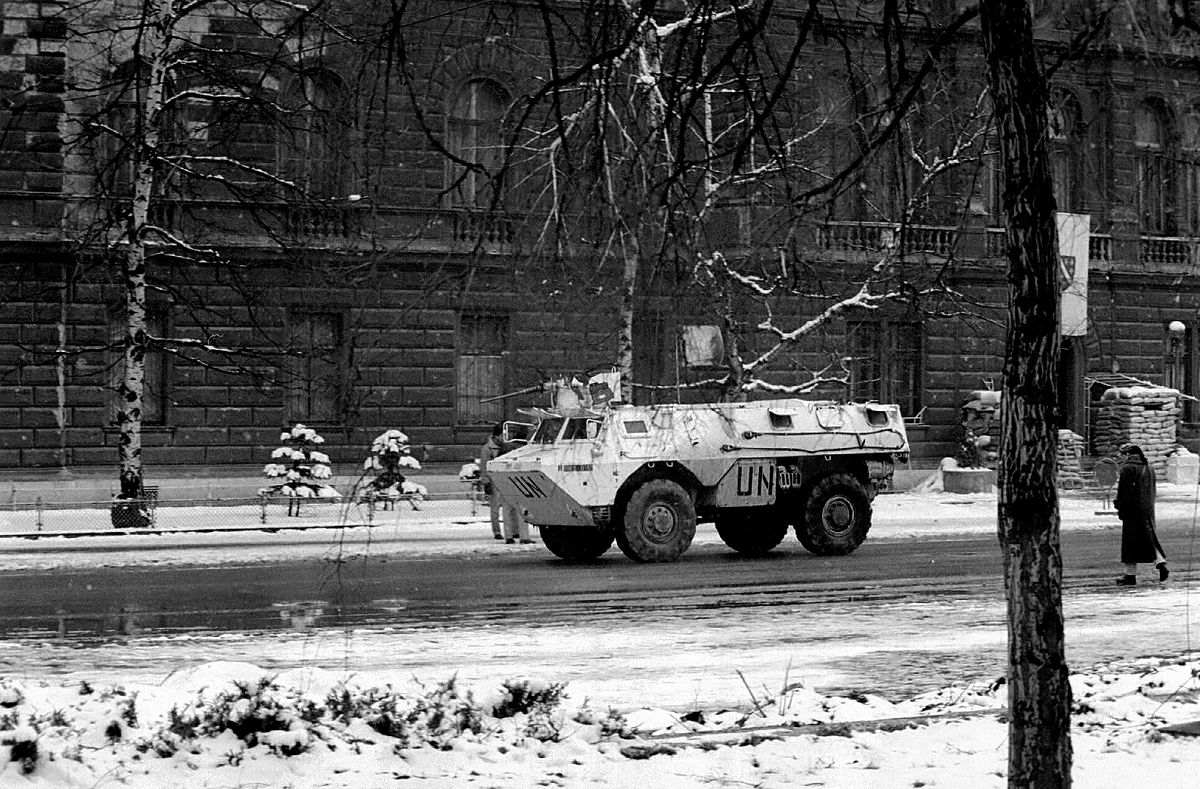 How do we remember the conflicts of the 1990s? A question to which the academic world, in southeastern Europe but not only, dedicates increasing attention. An overview

The events of the 20th century continue to play an important role in the countries born from the Yugoslav dissolution. Beyond the clichés evoking a presumedly inevitable return of the past, discussions about recent history remain greatly relevant. Two decades and a half since their inception, the wars of the nineties are certainly the most controversial chapter of the region's history, frequently recalled and debated on the media of the whole area.

But what are the deeper dynamics, the features, and the evolutions of the relationship with the past in post-Yugoslav countries, beyond the daily politics? Over the last twenty years, interest in memory has grown exponentially in universities and research centres around the world. As regards south-eastern Europe, great attention has been paid to the transforming relationship with the past in the phase of transition from socialism and constitution of post-Yugoslav countries.

Numerous scholars, dealing with various disciplines, have engaged with studying the ways in which the conflicts of the nineties are remembered. With no ambition of being exhaustive, we collected some recent research, useful to understand what are the main developments in the memories of the Yugoslav dissolution wars in Croatia, Serbia, and Bosnia and Herzegovina.

Croatia and the Homeland war

Various studies on the celebrations and anniversaries taking place in Croatia confirm the marked predominance of the narrative built around the idea of “Homeland war". The nineties are much less divisive in public opinion than the Ustasha and Communist past. According to Tamara Banjeglav (2012), in this narrative "the Croatian state is simultaneously an innocent victim of Serbian aggression as well as a victorious hero which managed to liberate its territory”. Suffering and collective heroism are symbolised by the Battle of Vukovar and the Storm Operation respectively.

In this context, the same researcher (2013) still finds controversy on the topic and highlights the work of civil society actors committed to acknowledging crimes and victims beyond their religious or ethnic background. The involvement of institutional figures, such as Ivo Josipović during his presidential mandate, encouraged a first introduction of such perspectives into official commemorations. Recent research has also taken into account the role of the European integration process. Vjeran Pavlaković (2016), for example, highlighted the reconsideration of anti-fascist traditions after the strong ambiguities of the nineties – an evolution that also helped soften the nationalist tones in the relationship with the recent conflicts.

As other studies have highlighted, however, controversial readings of the past resurface in various areas of Croatian society. Looking at the "memory agents" active from the bottom-up, Dario Brentin (2016) stressed the role of the sports world and fans in promoting ultra-nationalist interpretations that also involve the latest conflicts. Vukovar represents another epicentre of the contrasts related to the memory of the nineties, reinforced in particular by attempts to introduce Cyrillic into the city. However, as Renata Schellenberg (2015) explained, impatience is growing at the imposition of the role of "museum city", blocked in the past to safeguard national collective memory. The latest publications – while not being able to take into account the events of the last year – pointed out that tensions over these issues have resurfaced after Croatia's entry into the European Union. Return to nationalism in relation to the past is now emerging as a growing phenomenon in the political world and in the institutions (Vjeran Pavlaković 2016, SnježanaKoren 2015).

Serbia and the "forgotten" conflicts

Analysis of the situation in Serbia reveals, beyond the general national reading of the past, a controversial relationship to the war experience of the nineties. The difficulties of confronting the violent past and the issues of guilt and responsibility have been examined by various scholars dealing with transitional justice (Eric Gordy 2013; Jelena Obradović-Wochnik 2013). Studies on memory uncover issues arising from the confrontation with the country's role in the 1991-1992 phase. For example, recent work by Lea David (2015) highlights the general silence about the experience of Serbian veterans and the marginalisation of their associations. According to the scholar, this is an effective strategy put in place by the political leadership to avoid "any open and frank discussions of the role of Serbia and its responsibility for the wars of the 1990s".

In this context, the issue of responsibility for the genocide of Srebrenica – given the severity of the circumstance and the international pressure – has gained greater resonance. According to Jasna Dragović-Soso (2012), the condemnation statement voted by the Serbian Parliament in 2010 would have been difficult to endorse without EU pressure. However, the scholar stressed the limits of a result that "was deﬁned primarily by a behind-the-scenes politics of compromise ", ineffective as "a mechanism of societal transformation”.

However, Srebrenica is publicly remembered through the initiatives of a group of pacifists and human rights activists, particularly in Belgrade. Commemorations of the siege of Sarajevo and the concentration camp of Omarska have been recorded recently. According to Orli Fridman (2015), these are real "alternative calendars" that favour the opening of spaces for confrontation (and clash) on the past.

The public remembrance of the nineties, however, remains primarily concerned with the conflict with NATO in 1999. A recent issue of Südosteuropa magazine (Orli Fridman, Krisztina Rácz, Gruia Bădescu, Marija Mandić, 2016) highlighted the different perspectives on the event in the collective and individual memory. Commemoration swings between innocent victim mentality and heroism in defense of the country, but researchers find some uncertainty in the meaning of the institutional memory of the event. Commemorations promoted by the authorities appear limited even on the occasion of the most important anniversaries, in an effort to avoid both issues with European integration and a real confrontation with the responsibilities of the conflict.

The divided memories of Bosnia and Herzegovina

In Bosnia Herzegovina, divisions prevent the formation of a dominant narrative. The public memory of the wars of the nineties is fragmented along the administrative borders that separate entities and cantons. As noted by Nicolas Moll (2013), three official narratives coexist of the 1992-1995 conflict, each centred on victimism and "struggle for freedom". Such narratives are reinforced by referring to a past of constant contradictions, fuelling the three ethno-national competing projects. For example, Ioannis Armakolas and Maja Maksimović (2014) have pointed out how this approach has also characterised the propaganda about the recent census in the country, focusing in particular on how the traumatic memory of the war was used to support Bosnjak national identity in opposition to generic Bosnian identity within the Muslim community.

In the various political and administrative entities of Bosnia and Herzegovina, attempts to propose alternatives to dominant narratives cause strong tensions and are often ineffective. While the severity and resonance of Srebrenica's events led to the opening of the Potočari memorial in the territory of Republika Srpska, the memorialisation of the Omarska camp remains unfinished. Studies by Sebina Sivac-Bryant (2015) recently illustrated the difficulties that hindered the success of such initiatives, the consequences of their failure, and the responsibilities of local – and above all international – actors. On the other hand, Nicolas Moll stresses that the European Union has held a much more cautious attitude on public commemorations with Bosnia-Herzegovina than with Croatia and Serbia.

Also in Bosnia-Herzegovina, research reveals the presence of non-ethnic narratives linked to the idea of ​​a "Bosnian civic nation". Scholars interpret in this way monuments such as the famous "roses of Sarajevo", the monument to the international community of the Bosnian capital, or the one that remembers the Tuzla massacre of 1995. According to Anida Sokol (2014), however, such commemorations “until now have been very rare and marginal”, while many monuments of recent conflicts testify how ethno-national perspectives are often promoted even from the bottom-up. Many other significant aspects of the Bosnian conflict also remain marginal. Janet Jacobs (2016), for example, stressed how public memory in Bosnia and Herzegovina has erased the endemic experience of ethnic rape and gender violence.