The working elderly — why in Azerbaijan ‘nobody wants to retire’ 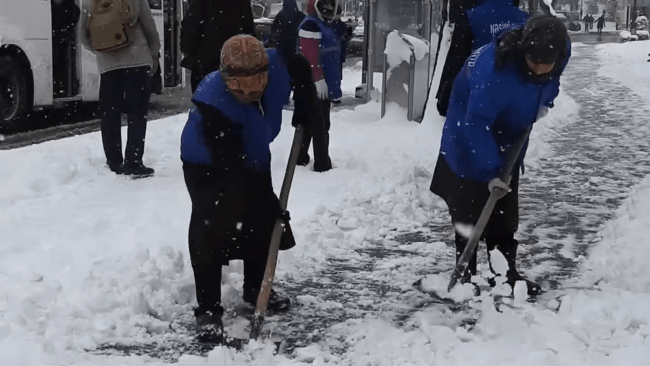 Elderly people in Azerbaijan are often seen working well beyond the age of retirement, often in hard physical jobs. The government has tried to celebrate this, claiming that no one wants to retire in Azerbaijan, but others point out that low state pensions give many no other choice

Sweeping the streets can be a deadly profession in Azerbaijan. In March, news that another street sweeper had died in Baku after being hit by a car gained significant media attention. This was not the first such case, and the conversation was not only about the safety of the city’s municipal workers — people were also questioning who it was that was doing this apparently dangerous job.

In Azerbaijan, elderly people beyond the age of retirement can often be seen working hard physical jobs. A video of an elderly woman clearing the snow published last year by Mehman Huseynov, a jailed rights activist and video-blogger, also provoked extensive debates, rising even to the parliamentary level.

The authorities have attempted to prevent more casualties, equipping Baku’s sweepers with reflective vests to increase their visibility in the dark. But this has done little to quell the public outrage at their general working conditions or the fact that in such an oil-rich country, elderly people have such low pensions that they are forced to continue to work.

Ziyafat (not her real name) is 67 years old; she works as a street sweeper. Every morning she sweeps an assigned area of Baku.

‘The government pension is not enough for me. I have a daughter who has a disability. I have to work both to survive myself and to support my daughter’, Ziyafat tells OC Media.

According to her, she receives a monthly state pension of ₼137 ($81). Her salary brings in nearly the same — ₼155 ($91). She says she also sweeps courtyards, entrances to residential buildings, stairways, and shops, and is paid unofficially for this by residents and shopkeepers — ₼3–₼5 ($2–$3.50) per service per month.

‘We cannot live like this. It costs money to visit the doctor, to buy medicine. The money is never enough to survive to the end of the month. I cannot afford to visit the doctor myself, nor can I provide my daughter with medical treatment. Putting myself aside, my daughter urgently needs treatment. I buy her some medicines every month so she doesn’t get worse’, Ziyafat says.

According to her, it is dangerous to clean roads early in the morning when it’s still dark.

‘When we sweep the roads in the dark we get very scared. We are afraid of stray dogs, and most of all — fast-moving cars. I don’t care so much about myself; I have lived long enough, but if something were to happen to me, I would be sad for my daughter’, Ziyafat says.

Compulsory insurance — not so compulsory?

‘According to Azerbaijani law, people over 65 years of age are not allowed to work in state-funded organisations’, lawyer Azar Guliyev tells OC Media. If an employee who reached the age of 65 wishes to continue working, the administration must renew the contract with that employee annually.

‘There is no age limit for organisations that are not financed from the state budget. If someone’s health allows, that person may continue working after turning 65’, Guliyev says.

The lawyer also notes that a compulsory insurance agreement against occupational accidents and occupational diseases must be signed by all employers with their employees. This means employees or their families are entitled to compensation from their employer if an employee is injured or killed at work.

But many in Azerbaijan do not appear to know this. When accidents do occur, employers often try to cover this up and try to buy off the victim’s family quickly to silence them, according to Natig Jafarli, an economist and member of the congress of the opposition Republican Alternative Party (REAL).

According to Guliyev, ‘If a person’s health does not allow them to work and yet they continue working, it is a violation of the Labour Protection Act. It is also a violation of their labour rights. In case of an injury, depending on its severity, the employer is criminally, administratively, or financially liable’.

Mirvari Gahramanli, head of the Oil Workers Rights Protection Organisation, says people older than the retirement age often continue to work because of the economic and social situation in the country.

‘The main reason for those people to continue working even in hard conditions is their social situation. Low pensions and insufficient savings force them to work’, Gahramanli tells OC Media, pointing out that the low government pensions are not enough to live on.

‘Nowadays, many families suffer from unemployment. People cannot financially support their parents. As a result, elderly people have to continue working’, Gahramanli said.

‘Everywhere in the world, people start protesting when the retirement age is increased. Because in developed countries, people want to retire earlier. In Azerbaijan, it is not the same. The pensions are so low that people do not want to quit their jobs’, Jafarli argues.

Given the low government pensions, Jafarli suggests that creating private funds could help mitigate this problem. In his view, the pension fund should not be owned by the state alone.

‘Private funds give people better opportunities. Those opportunities are for the benefit of pensioners. Also, citizens are more likely to pay more into pension funds during their employment, so that they can get more money in return when they retire’, Jafarli argues.

He also notes that although on paper there is compulsory insurance against occupational accidents for everyone employed in Azerbaijan, there is no serious mechanism to implement this.

‘Nobody wants to retire’

‘Cleaning, greening, and other services cannot be limited by age. Why should we prohibit someone from working, if they are healthy and have the ability to work? What if their labour contract allows that?’ Guliyev said.

Last year, the retirement age for men and women was raised to 65, according to changes made to the law ‘On labour pensions’. The new regulations will come in gradually, up from 63 for men by 2021, and from 60 for women by 2027.

In a televised debate between presidential candidates prior to April’s election, Deputy Prime Minister Ali Ahmadov, standing in for President Ilham Aliyev, said that people in Azerbaijan do not want to retire.