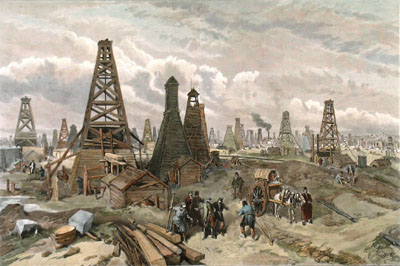 The war in Georgia and the recent gas crisis with Ukraine have revived Europe's willingness to develop the Nabucco pipeline, an alternative transit route for gas imports from the Caspian Sea basin that would bypass Russia

Not unlike other energy issues in other parts of the world, the issue of oil and gas production and its transportation in the Caspian Sea Basin has always been highly political. The intensity of geopolitical intrigues surrounding Caspian resources is the result of post-colonial changes in the balance of power, the region's entry into a new stage of competition between regional powers for resources and the entry of extra-regional actors such as Europe, USA and China into this competition. The former dominating energy power, Russia, is also attempting to retain its position in the region. The political tensions surrounding the planned gas pipeline Nabucco reflect a new stage of this competition.

Nabucco is an alternative gas pipeline project which would deliver gas resources from the Caspian basin to Europe. Initiated in 2002, the project involves plans to build a pipeline which would run through Azerbaijan, Georgia, Turkey, Bulgaria, Romania, Hungary and Austria with Turkey bearing the largest transit share: 2, 000 km of a 3, 300 km pipeline.

It is an ambitious project not only because it is expensive - 8 billion Euro (more than two times the cost of the Baku-Tbilisi-Ceyhan, Btc, pipeline - 3.6 billion USD) - but most importantly because, like the Btc, it is a project of strategic significance as it will bypass Russia and thus challenge Russia's monopoly on gas supplies to Europe and decrease Europe's dependence on Russia.

Two events in the last few months were crucial in exposing the extremely tense political context of Caspian energy production: Russia's war in Georgia in August, 2008 and the Russia-Ukrainian gas crisis. First, in addition to the factor of generally tense relations between Russia and the two states of the "orange revolution" (and Russia's sensitivities in regards to their influence in the Black Sea basin), the war did not target only Georgia and had multiple targets for punishment: states with Nato aspirations. Secondly, the war showed that maintaining a monopoly on gas production and transportation is not only Russia's foreign policy objective, but also a tool of her political domination.

When the war in Georgia broke out, the military actions in immediate proximity to the oil ports and pipelines - and the explosions which forced Azerbaijan to temporarily interrupt the flow of oil via the Btc pipeline, a strategic Western project - signaled Russia's intention to undermine the very concept of Georgia as the main transit state between the Caspian and Europe. As Kent Moors put it, "Tbilisi now faces the real damage, some probably irreversible. Georgia's image as a secure energy route is shattered."(Georgia Conflict Obliges Export Route Reality Check, Caspian Investor, 21 August 2008

Russia also tried to intimidate her immediate Caspian Sea neighbors in two ways: by undermining the security of oil and gas resource transits and by taking military action in Georgia. These strategies aimed at preventing Azerbaijan, Turkmenistan and Kazakhstan from participating in the future alternative pipelines. In this way, Russia also aimed to politically "blackmail" European partners, thereby diverting their intentions from alternative energy sources and transportation routes.
Indeed, in order to reach Nabucco's full capacity - 30 billion cubic meters per year - gas from Turkmenistan and Kazakhstan will be required in addition to Azerbaijan's gas from the Shah Deniz field which will fill the pipeline only at the initial stage.

Thus, the struggle to dominate the Central Asia states became another issue in the competition to control gas supplies. Intense diplomatic efforts immediately after the war on the part of Russia, involving high-level visits to Central Asian energy-producing states, seemed to be aimed at taking advantage of the "effects" of the war.

Not everything went smoothly on the other, Western side of the Caspian either. First, Turkey seemed to take advantage of her position as a transit country by trying to tie the issue to her integration into Europe. Then, commercial considerations slowed Turkey's EU negotiations because Turkey wanted to buy gas cheaply at her Eastern border and sell it for a profit at her Western border.
Lack of unity within the EU due to the bilateral energy relations of Germany and France with Russia has been another factor impeding realization of common projects because Nabucco would clash with Russia's Nord Stream or South Stream project plans.

These conflicts remind one all too well of the 1990s when Western and regional partners discussed prospects for transporting Azerbaijan's "big oil" by way of the Btc oil pipeline. In addition to the existing route via Russia, Baku-Novorossiysk, and Georgia, Baku-Supsa, local partners such as Azerbaijan, Georgia and Turkey, along with the Usa, insisted on building a new pipeline to bring oil from the Caspian to Europe instead of upgrading the Russian one. Two sets of interests clashed: commercial and political.

While stakeholders resisted the expensive pipeline because they believed it would irritate Russia and raise the pipeline's political risks, the Caucasus states, supported by Turkey and the United States, strongly pushed for the pipeline bypassing Russia. The popular slogan "Happiness is multiple pipelines!", which appeared on car bumper stickers, touted the principle of diversification of pipelines which some saw as the best way of distributing the risks related to oil transportation. The behind-the-scenes discussions were so strong because they reflected not only discrepancies in regard to commercial viability between European and American partners, but also the possible political consequences of the new route.

The pro-Btc activities were symbolically epitomized in the PR campaign arranged by the renowned journalist Thomas Goltz in which a group of bikers and performers carried oil in wooden barrels along the entire future route of the pipeline determined to change geopolitics of the region. Indeed, without first the commitment of the producer country, Azerbaijan, and the transit states, Georgia and Turkey, the pipeline would not exist. Because any energy pipeline is also a symbol of geopolitical control, for the states of the Caucasus who took the course of Western integration, the pipeline was an important geopolitical tool. First, it helped consolidate their independence from Russia and, second, it tied them more strongly to the West.

The situation is similar to the current debates surrounding the Nabucco gas pipeline, but with some significant differences. Control over Nabucco, the last hope for an energy monopoly for Russia and state-controlled gas company Gazprom, has acquired greater significance for Russia since she lost control over the oil pipelines. This time for Russia, the stakes are higher.

With the war in Georgia, she demonstrated that she would resort to any means, including application of force, to protect her interests. However, the peaceful resolution of the Russia-Ukraine crisis may signal the possibility of responsible behavior, especially when Europe is united in defending her interests.

Secondly, unlike the issue with the Btc when European and US interests were divergent, the two aforementioned events brought the two positions much closer. Of all other consequences, one is clear: Russia is not a reliable partner for Europe in the area of gas trade. On 5 September, EU energy commissioner Andris Piebalgs's statement that "the EU must redouble its efforts to build the $12 billion Nabucco gas pipeline and reduce its dependence on imports from Russia in the wake of the Georgian crisis" ( Energy: Brussels told to pursue Azerbaijan pipe dream, David Gow, The Guardian, 5 September 2008) clearly demonstrated lessons learned, on the part of the EU, in the wake of Russia's actions.

And third, the greater interest of Europe in the gas pipeline through the South Caucasus makes the issue of security of local actors more tied to that of Europe. Georgia and Azerbaijan, even with their problematic domestic policies, are more experienced actors and have developed stronger state institutions and closer partnerships with the US and Europe. Not least is the fact that for Azerbaijan, Georgia and Turkey, the political will to build Nabucco rests, to a large degree, on their European aspirations.

Despite these complications, current EU chair, Czech Republic Prime Minister Mirek Topolanek, gave a speech during his visit to Baku which confirmed the growing commitment of European actors to Nabucco ahead of an upcoming summit of the state participants of the project to be held this spring. This is an encouraging step in European unification vis-a-vis the challenging objective of winning another "great game" in Central Asia - indirect proof of the counterproductivity of Russia's energy and foreign policy.

*Leila Alieva is president of the Center for National and International Studies, Baku