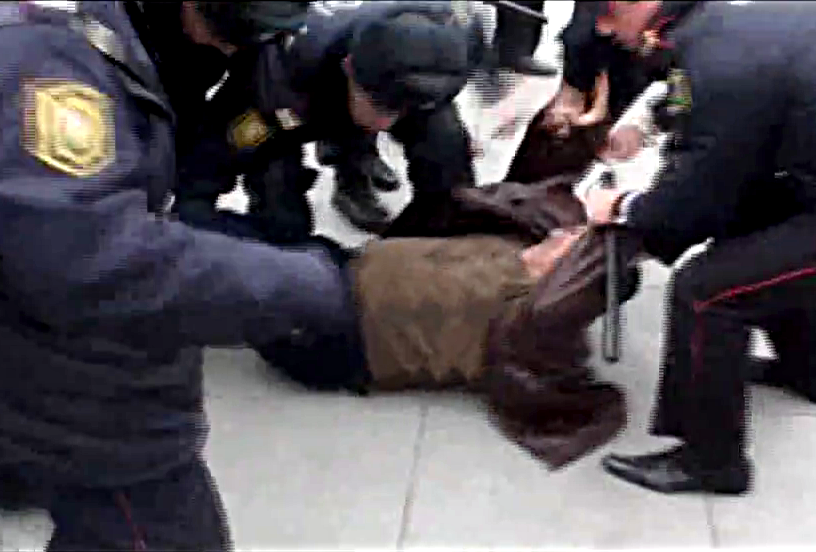 Are the winds of the “Arab Spring” reaching Baku after all? A number of peaceful protests directly calling for the authorities to resign have started in Azerbaijan, with the Internet playing a key role. The demonstrations have so far been met by repression, intimidation and new arrests

Earlier in March, a group of young and internet- savvy activists created a Facebook event page, calling it “March 11th- Great People’s Day”. In a short time, the group managed to gather thousands of supporters (more than 4,000) not only among independent activists and students but also among opposition party members. The Facebook page called on the Azerbaijani people to unite in demanding a change in the current regime. It was a loosely-organized structure with no leaders guiding the campaign and it did not have any clearly-defined set of actions. It served as a platform for young and independent activists, students, and opposition members, to discuss and share their ideas. It was the first nonviolent form of resistance in recent years that directly called on the authorities to resign.

Government reaction was inevitable. Days before the planned event, various pro-government individuals dismissed the event, calling it a spoof and accusing its creators of being anti-Azerbaijan agents either acting on behalf of “international forces” or Armenia. The extent of the blasphemy went as far as getting the country’s head psychologists, Geray Gerabeyli, to comment on recent actions. According to Gerayli, users of social networks as means of communication may have symptoms of psychological problems, as the users of social networks are most often the people who are refraining from real-life interaction. Incidentally, the country’s President is also an active Twitter user and has his own YouTube page.

These reactions were only the initial signals of the imminent steps that would be taken by authorities in the days and weeks following the March 11th campaign. Arrests began shortly after the authorities noticed the Facebook event page. Starting with the members of the youth branch of the opposition parties like Musavat and other activists linked to the March 11th event, people were quickly targeted. Bakhtiyar Hajiyev, a Harvard graduate, activist, and parliamentary candidate in the November 2010 elections was among those who was arrested earlier in March (his case is still awaiting trial) as his name, too, appeared as one of the moderators/organizers on the March 11th Facebook page. Though the authorities quickly dismissed his arrest, arguing that Hajiyev’s arrest was based on charges of 'evading military service', Hajiyev and other young activists are certain it was for his online activism and outspokenness.

And if the authorities thought several dozen arrests and intimidations might silence alternative voices and growing discontent, they were mistaken. On March 12th, protests continued, this time, organized by the country’s opposition party, Musavat. It was the first time since the organized protests in 2005 that the opposition parties took to the streets calling on the resignation of the current regime. Police brutally dispersed protesters, calling this attempt a last resort of a weakening and gradually-vanishing opposition in Azerbaijan. Once again, arrests, detentions, beatings, and intimidation were applied.

The next protests were scheduled for April 2nd and called “Day of Rage”. The description of the event’s Facebook page said the following: “Azerbaijani People will show their rage against the dictatorial regime that has been squashing, humiliating, and violating their rights”. The campaign was organized by the Public Chamber - a coalition of non-partisan politicians, opposition political party representatives, and NGO activists. While local police estimated around 350 participants and opposition claimed around 4,000 to 5,000 protesters, one thing was certain: Azerbaijani authorities adopted a zero-tolerance against “disobedient” violators of stability. Police response was more brutal than it was during the March 11th protest s- kicks, baton blows, rubber bullets, tear gas, and beatings were common measures used against protesters. The demands of protesters were the same: resignation of the current regime, an end to tyranny and corruption, and freedom.

The most recent protest took place on April 17th. Called “Great Unity Day”, this protest too, as was the case in previous protests, met with severe police crack down. Organized by the Public Chamber, hundreds of people were detained and arrested once again. Some of this footage [AZ] shows how police arrested some of the passersby who had nothing to do with protests, including elderly and young people. Once again, “Freedom” and “resignation” were among some of the demands.

The government line remained the same: immediate dismissal of any brutal actions taken by the police and the irrelevance of protests and protesters. Following protests closely the ruling party’s deputy secretary, Mubariz Qurbanli, said there were not any more police that day than those who normally patrol the streets. According to Qurbanli, they were doing their jobs: providing security to local residents. “I didn’t see any rally. Radicals tried holding a protest in a place outside of the rally venue designated for the opposition and so police were there to simply oversee any unlawful actions […]”, adding: “The group calling itself the Public Chamber is nothing more than an empty and meaningless organization”.

Another pro-government advocate, Bakhtiyar Aliyev, the deputy assistant to the National Parliament’s Science and Education Committee, explains the most recent protest as an attempt to impede the democratic development of Azerbaijan and hinder its stability through artificial resistance.

And yet, as these protests and their organizers are seen as artificial and insignificant, measures are taken to prevent any further escalation of the situation. A criminal charge based on Article 281.1 of the Criminal Code of Azerbaijan that criminalizes “calling for the violent seizure of power” was launched against one of the organizers of the above-mentioned Facebook pages: Elnur Majidli, a Strasbourg-based activist. According to Majidli, his parents as well as relatives have been subject to pressure and his father was dismissed from his work-place. Precautious measures target foreigners too. During the April 17th protests, three Swedish journalists were deported based on the argument that they were not accredited by the Ministry of Foreign Affairs in Azerbaijan. This footage, aired on one of the Swedish channel’s TV shows, shows how they were carried away to one of the police stations by plain-clothed men who did not respond to any questions regarding their identity.

The wave of protests is likely to continue, only irritating the government even more. And as the authorities will continue saying that Azerbaijan is a beacon of democracy, emerging alternative voices will continue calling for equal rights, freedoms, a free economy, and democracy, despite their numbers being relatively low. Perhaps the winds of the Arab Spring are reaching Azerbaijan after all.