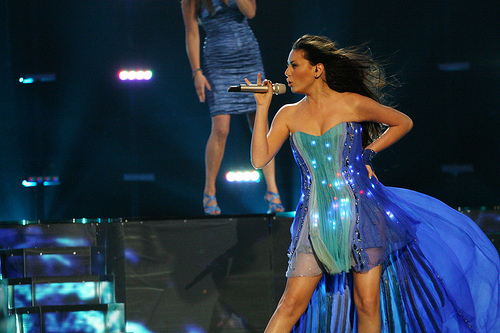 Oil money and ethnic voting lose out to simplicity in Eurovision

This year’s Eurovision Song Contest held in Oslo, Norway, was the 55th since its inception in the 1950s. Conceived at a time when Europe was in the process of rebuilding itself after WWII, the idea was simple enough, even if the technical problems of doing so were colossal at the time. In order to create a much-needed sense of unity and also to put live broadcasting to the test, members of the European Broadcasting Union (EBU) would enter one act into a televised international music competition to be simultaneously transmitted to each participating country.

Since then, the number of countries entering Eurovision has grown. In 1956 there were just 7 while in 1993, following the collapse of the former Soviet Union, there were 25. This year 39 countries entered. Armenia has participated since 2006, Georgia since 2007, and Azerbaijan since 2008.

But if the intention was to promote unity, Eurovision has not been free from the occasional controversy. In 2005, for example, Lebanon was forced to pull out of the competition after it refused to broadcast Israel's entry. In recent years, though, by far the greatest scandals of all have involved the countries of the South Caucasus. Last year Georgia pulled out after its entry, a song mocking Russian prime minister Vladimir Putin, was considered ‘too political,’ but the main controversies have nearly always involved Armenia and Azerbaijan.

Still locked into a bitter conflict over the disputed territory of Nagorno Karabakh, some analysts are concerned that fighting between Armenia and Azerbaijan might once again break out. Over 25,000 were killed and 1 million forced to flee from their homes in a war waged in the early 1990s. Although a ceasefire agreement signed in 1994 put the dispute between the two countries on hold, a lasting peace agreement remains elusive. Armenian forces currently control 16 percent of what the international community considers to be sovereign Azerbaijani territory.

In such an environment, it is perhaps no wonder that Eurovision has become as much a staging ground for a propaganda war to be waged in front of around 120 million viewers worldwide as it is a music competition. Last year, for example, the two countries came to blows when the presentation video for the Armenian entry displayed a statue symbolic of ethnic Armenian governance of Nagorno Karabakh. Azerbaijan complained and it was removed on the insistence of Eurovision. However, Armenia’s presenter purposely displayed the offending statue on the back of a clipboard used to read out the results in the final, although that wasn't the only issue.

During the competition itself, the telephone number to send votes by SMS for Armenia was deliberately obscured in Azerbaijan although that didn't stop some viewers on the other side of the ceasefire line from voting for its foe anyway. One of those was Rovshan Nasirli, an Azeri refugee from Nagorno Karabakh, who was called in for questioning by Azerbaijan’s National Security Service (NSS). According to Nasirli, the NSS had the names and addresses of another 42 who voted the same way. In his defense, he said he voted for Armenia, which came 10th, because it sounded ‘more Azeri’ than Azerbaijan’s entry which came in 3rd.

Azerbaijan was fined €2,700 for the incident.

It was therefore no surprise that signs initially were that this year's competition also risked going the same way when Armenia chose its entry in February. The song, Apricot Stone by Eva Rivas, a Russian citizen partly of Armenian origin, was considered by some to represent the yearnings of a Diaspora forced to flee their homes during the 1915 massacres and deportation of as many as 1.5 million Armenians living in the then Ottoman Empire. Armenians and most historians consider the events of nearly 100 years ago to be the first Genocide of the 20th Century. Turkey denies the claims.

Yet, another scandal eclipsing that of the seemingly never ending battle between erstwhile foes in the region was to instead take center stage when supporters of some of Eva Rivas' local rivals claimed the national competition that selected her had been rigged. Similar accusations were also made in neighboring Azerbaijan when 17-year-old Safura Alizadeh was selected in their national competition held in March. However, no evidence to back up such claims were presented in either county, but what was perhaps more important was that yet another possible inter-country scandal had been averted by concerns at home.

Instead, and somewhat remarkably, there was relatively little of the tit-for-tat squabbling that had defined the participation of both countries in the past.

Even so, when bookmakers placed Safura as favorite to win the competition thanks to the effective use of online media and a slick and well-financed publicity campaign, some Armenians reacted harshly to the near constant attention on the young singer by the Eurovision music press. In response, a small albeit unofficial campaign was launched against her by a few individuals spreading information that she was directly backed by the authorities in Baku and Azerbaijani President Ilham Aliyev in particular. No such campaign had been directed against Armenia’s 2008 entry, Sirusho, daughter-in-law of the former president, Robert Kocharian.

Nevertheless, some Russian media outlets claimed that Azerbaijan’s Eurovision entry had cost €10 million and was some kind of 'war' between the Russian and Azerbaijani mafia. Although still not known, international media outlets such as the BBC estimated the cost of Safura's entry at between $1-3 million while government critics in the oil rich country claim anywhere between $6-16 million. To date it is not known how much either Armenia or Azerbaijan spent at a time when even some countries in Western Europe balked at the high costs associated with entering the competition.

One popular English-language Azerbaijani blogger, Scary Azeri, analyzed the phenomenon that is Eurovision in the region and offered its opinion as to why even colossal costs have not deterred her native country in a post just as applicable to Armenia and Georgia. “I hope all those poor pensioners in Azerbaijan appreciate that it was more important to invest in the arguably most talentless music show in the world, than increase their minimum pension,” she wrote. “Is it because, for countries like Azerbaijan, Eurovision is the only chance to feel like a part of the world’s pop culture?”

Regardless, they did however arguably leave their mark. In the second semi-final which determined the entries for the actual final held just two days later on 29 May, the region dominated the vote. Staging elaborate and heavily choreographed shows, Azerbaijan’s Safura came 2nd, Georgia’s Sofia Nizharadze came 3rd, and Armenia’s Eva Rivas came 6th. Indeed, according to many Eurovision pundits and bookmakers, Safura remained the main favorite to win the competition alongside Germany’s Lena. It was then that some signs of new potential flashpoints emerged.

On her Facebook page, Rivas urged supporters to vote for her entry in order not to let Azerbaijan or Turkey come first. Meanwhile, on the day of the final, for example, Armenia’s Minister for the Diaspora, Hranush Hakobyan, called on all ethnic Armenians living outside of the republic to vote for Eva Rivas. “The moment has come once again for unification and victory. May Armenia win [and] may the triumphant flag of Armenia flutter,” she said through the mass media. “Apricot Stone is ours, only ours and […] and the Diaspora […] will pick the berries of the investment […] and a real cultural victory.”

At the same time, Armenian media outlets reported that Azerbaijan had made a complaint about what appeared to be the omission of key territories, now under the control of Armenian forces, on a brief animation of its map in the TV show. Others in Europe and elsewhere, however, were more concerned with some of the political voting displayed by countries in the Eastern bloc. Russia, for example, saved its top marks for its former satellites in the region. Not that it probably mattered.

More importantly, perhaps, despite some minor squabbling mainly outside of official circles, the competition was for once held largely without incident, leading one ethnic Armenian regional analyst, Kevork Oskanian, to send out a short message on the popular micro-blogging site, Twitter. “German efficiency and simplicity wins over oil money and diasporan nationalism,” he tweeted. “Excellent.”