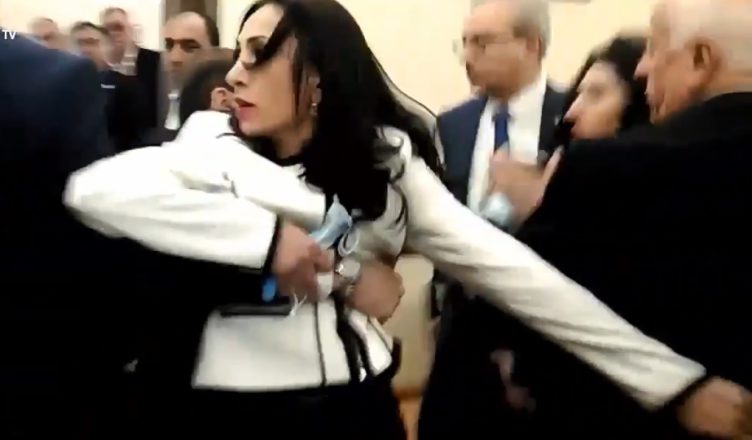 The sitting of Yerevan City Council

On 13 February, female councillors from Armenia’s women-led opposition party Yerkir Tsirani were attacked, physically and sexually, during a Yerevan City Council session. The women were later blamed for the attack

(Originally published by OC Media on the 13th March 2018)

On 13 February, two female councillors from the women-led Yerkir Tsirani (Apricot Country) party were physically and sexually assaulted during a sitting of Yerevan City Council. Later the pair were manipulatively accused of ‘inappropriate behaviour’ in the council.

Marina Khachatryan and Sona Aghekyan were trying to bring attention to a long neglected problem in Yerevan’s Nubarashen District, where sewage has been leaking from a local prison into residential areas, spreading a foul smell affecting both the district’s residents and prisoners.

Khachatryan and Aghekyan distributed masks to councillors and journalists present at the meeting, put on surgical gloves and masks, and displayed glass jars filled with samples of the polluted sewage water.

‘Nubarashen Administrative District has brought you a gift’, Khachatryan said, approaching Yerevan’s Mayor Taron Margaryan with a jar. ‘People breath this air, so you should too!’, added Aghekyan, despite the insults coming from the male crowd.

As the women spoke, the mayor ordered they be stopped, and male councillors and staff immediately encircled them, assaulting them and roaring threats. Edmon Kirakosyan, a member of the ruling Republican Party, sexually assaulted Khachatryan, grabbing her breast; in response she slapped him. Filled with unbridled anger, around a dozen men manhandled the two, grabbed Khachatryan by the hair, hitting her hard several times in the face, all in front of the audience and the live-streaming cameras.

This violence perpetrated against women politicians was manipulatively described and labelled by the media as a ‘scuffle’, as if the violence was two-way and both parties were on equal footing.

Moreover, Khachatryan was accused by representatives of the Republican Party of beginning the ‘brawl’, a view which was not uncommon on social media. Despite the videos clearly showing Edmon Kirakosyan grabbing her breast, the issue of sexual assault didn’t make it to the media until Khachatryan made it clear: ‘who gave him the right to take off my clothes, touch me, my breasts, my body?! When I realised what was happening, I slapped him in the face’, she declared.

Feminist and environmental activist Anna Shahnazaryan told OC Media sexual assault is a conscious strategy deployed by the state, especially when police crack down on protests. She brings up her own example of when a policeman purposefully hit her breast in November 2014, at a demonstration against uninvestigated deaths of soldiers in the armed forces. She says this is used to provoke a response from protesters, to create a justification to take further action. This clearly worked with Khachatryan — because she slapped Kirakosyan, she was accused of initiating the ‘brawl’.

The brutal violence inflicted against female councillors did provoke public criticism. The same day, several dozen activists gathered in front of the City Council. ‘An abuser’s place is in prison’, ‘abusers are criminals, so are those who cover for them’, ‘your nose couldn’t stand the odour but your eyes are used to violence’, ‘women against the regime’ — these and several other posters were held by the whistling protesters who came to demand punishment for the abusers.

After several protesters entered the city council and continued their peaceful protest inside, police applied disproportionate force, violently removing them from the building injuring some participants.

‘Oppression and violence against women is ubiquitous and has a structural nature. Our fight is not new and will not end today’, female protesters declared in a statement following the police attacks. Later, 55 individuals and organisations issued an open letter to the mayors of Yerevan’s twin cities, demanding they suspend cooperation with Yerevan Municipality.

Residents of Nubarashen have already been complaining of the sewage in their neighbourhood for several years, to no avail.

‘We have complained dozens of times to the City Council, but nothing has been done so far’, one local resident told 1in.am.

‘Let them [Republican politicians] go live in Nubarashen District. They couldn’t stay even a couple of minutes in that room while sewage water was simply brought in jars’, Khachatryan told RFE/RL’s Armenian service, Azatutyun.

The actions of Yerkir Tsirani’s women was a fulfilment of their commitment to serve Yerevan’s citizens. The councillors used an activist technique to raise an issue delegated to them, a technique that can be described as a practice of non-violent political resistance. When the language of politics proves itself to be exhausted, it is a common practice to look for alternative ways to raise important issues.

This sort of resistance was deemed unacceptable not only by the ruling parties, but also in oppositional circles. What happened in the City Council revealed a deep ideological division between two opposition parties, Yerkir Tsirani and Yelk.

After the incident, Davit Khazhakyan, the leader of Yelk faction, defined Khachatryan and Aghekyan’s actions a ‘show which was beyond limits’.

‘We need to undertake measures so that the natural course of sessions is not disturbed’, Khazhakyan declared, apologising to citizens for the interruption caused by Yerkir Tsirani. As he later concluded to the media, ‘the methods chosen by Yerkir Tsirani are alien to us’.

Khachatryan and Aghekyan’s actions, which went beyond the conventional ‘suits and ties’ format, were deemed ‘too radical’ and ‘inappropriate’, ironically by even oppositional forces. Yerkir Tsirani was accused of violating the City Council’s code of conduct. The same day that the violence took place, the City Council issued a public statement that ‘members of the Yerkir Tsirani faction committed an act which is not worthy of an Armenian, a Yerevani , or a conscious human’.

With such manipulative wording, the authorities reinforced their message that civic or political resistance are techniques of the ‘other’, of the ‘non-Armenian’. We, ‘the people of Armenia’, should praise obedience to the rules and orders, was their message.

But for several activists, Khachatryan and Aghekyan’s actions, on the contrary, were a key political step.

‘To me, what was done by the Yerkir Tsirani women was the most important and multi-layered political event in recent times’, states queer-anarchist and feminist Zara Harutyunyan. ‘If the parliamentary opposition is not able to influence any decision-making process, what function does it undertake while maintaining procedures and acting in accordance with them?’, she asks.

During the same council meeting, Yerkir Tsirani’s head Zaruhi Postanjyan stated, ‘we are here to poison your life’. For Harutyunyan, this is a key statement in the formation of real oppositional rhetoric.

Her thought is reminiscent of American feminist writer Audre Lorde’s famous statement that ‘the master’s tool will never dismantle the master’s house’. When an opposition becomes an advocate of the system, perpetuates its techniques, and breaks the line between oppressors and fighters,  it is transformed into a more dangerous sort of political force.

Violence against Armenia’s female councillors is a feminist issue

Women in Armenia are subjected to all sorts of gender based discrimination and violence. According to the World Economic Forum’s Global Gender Gap Report 2017, Armenia ranks 111th of 144 countries in terms of women’s political empowerment. In this patriarchal society it is expected that women are confined within the norms of ‘modesty’, ‘submission’, and ‘voicelessness’. Any action — be it within the family, in institutions, in public, or wider political arenas — which subverts those norms shakes the foundations of the patriarchal system and puts the transgressor at risk.

‘The incident makes evident the widespread and often “home-based” violence against women by spilling it out into the public arena. This time, the violence is perpetuated by male public figures (state officials or those affiliated with them), in other words, true patriarchs’, asserts activist Anna Shahnazaryan.

This very public violence against women ‘including sexual assault and verbal humiliation’, stands  in ‘stark contrast to public violence taking place between or against male politicians (the fist-fights we are used to observing)’, Shahnazaryan adds.

In order to publicly shame Yerkir Tsirani’s women as women, members of the Republican Party use a number of manipulative and degrading techniques. Zaruhi Postanjyan and her colleagues are often ridiculed, publicly shamed for ‘not being real women’, described as ‘hysterical’. They have endured a long history of gender based humiliation and violence, perpetrated or ordered particularly by members of the Republican Party.

In October 2017, during another council meeting, member of the Republican Party Levon Igityan targeted Marina Khachatryan, stating of her, ‘what woman? Bitch!’

On 14 May 2017, during elections to the city council, police officers subjected Zaruhi Postanjyan and her daughter to violence with Postanjyan’s daughter suffering a concussion as a result.  ‘We live in a society where subjecting women to violence with no consequence has become normalised’, says women’s rights defender Anahit Simonyan.

Interestingly but not surprisingly, sexism is espoused not only from male but also from female politicians. In June 2017, when members of Yerkir Tsirani were raising several political questions at another council session, Republican Hasmik Sargsyan interrupted them: ‘It’s embarrassing; you are women, mothers!’

Addressing the opposition party’s actions at the last council session, Sargsyan tried to publicly shame her fellow female councillors. ‘What sort of a uterus brought you to this world?’ she asked.

Such attitudes are encouraged even on presidential level. Republican councillor Naira Nahapetyan, who claimed with no reason or evidence that the water brought by Yerkir Tsirani’s women contained acid, was given a prize by Prime Minister Serzh Sargsyan on 3 March for her ‘contribution to Armenia’s political life’.

Repression against Yerkir Tsirani’s members is aimed both at limiting the opposition’s actions and the critical participation of women in politics. The patriarchal system of oppression does not need women who do not wish to reproduce the status quo. These questioning women become a challenge to the system itself, but because they are women, it is easy to discredit their actions since a woman's place is already seen as auxiliary to that of men.

Nevertheless, when the regime’s expectations are not fully met and the system finds itself in trouble, it tends to resort to the classical method of violence. This is the same type of degrading violence women are subjected to in their homes, where they are forced to tolerate it in silence. But here the violence erupted in front of the cameras, and the brutal behaviour of men was fully exposed to the public eye.

This is a clear message from the patriarchal authorities — women should know their place and limits, otherwise they will be punished like this. Yet, Zara Harutyunyan concludes, ‘I see women who already stepped outside the boundaries and who cannot be ordered back into obedience by imposing fake morality’.

Yerkir Tsirani’s case shows that some women have transgressed these borders, but will they succeed in poisoning the system?