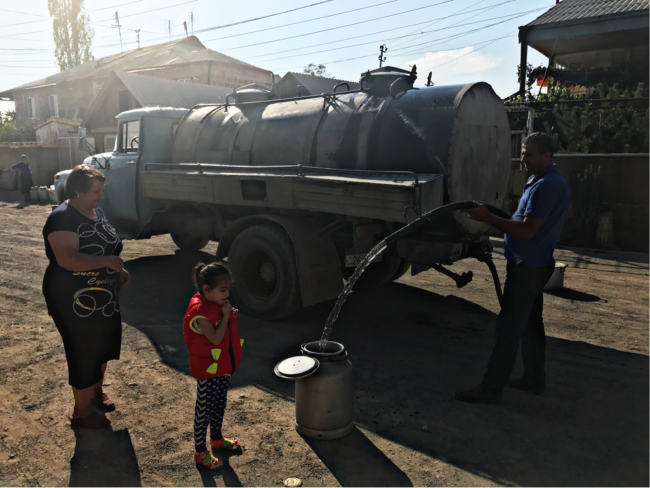 In Armenia’s capital Yerevan, drinking fountains can be found on almost every street corner. But in the neighbouring Armavir Province to the west, water quality is so low that villages rely on private delivery lorries, bringing clean water to the villages each morning

Large pots line the streets of the village of Karakert, in Armavir Province. Without exception, at least one boiler is lain in front of each house. Everyone eagerly awaits the water sellers, who come early in the morning to sell drinking water.

‘I’m a 60-year-old woman born and raised in Karakert, and since the moment I opened my eyes there was no drinking water here, water sellers always came and we bought water in buckets’, Heghine Meloyan tells OC Media. ‘Every day we buy about 80 litres of water. We have a large family and we drink, cook, and take care of a thousand needs with this water’, she continues.

‘My hands hurt from carrying these vessels. There are some things a person needs to do every day, like washing the dishes or going to the toilet, and so people from our village have to buy water every day’ Heghine’s husband, 70-year-old Aram Karapetyan says.

Founded in 1902, the village is just 70 kilometres from the capital Yerevan, and yet still, there has been no drinking water since the day it was founded. 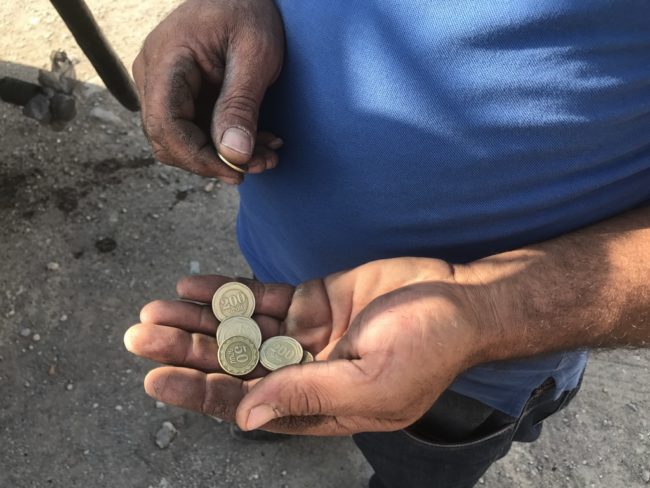 Tigran Davtyan has been coming to Karakert for 22 years with his ZIL water lorry. The locals call him ‘the water man’.

‘First I’m going to fill Mrs Heghine’s pots, the poor woman has been waiting for me since morning. There is an event at their house and they need some water’, 46-year-old Tigran tells OC Media. He detaches the pipe from the lorry and starts pouring water into the woman’s pots.

‘My father-in-law also sells water, he’s a more skilled master. We come here together and we sell water in the nearby village of Shen. Every morning at 07:00 we are in Talin, where we buy the water. Then we come here and first bring water to the preschool, then to the school, and then we start selling water in the streets’, says Tigran. ‘About 10 people are engaged in this business serving all the villages in Armavir Province with their own vehicles’, he adds.

‘There are people, who pay for water in cash, and others who buy it on credit — they mainly pay when their pensions or benefits arrive. I already know by heart who lives where, who works abroad, and when they send money, as many of them pay for water with the money sent by relatives from abroad’, he continues.

‘The names of the borrowers are written in the books. We have written and erased their names so many times the copy-books are already worn-out from it. You’ll find many secrets in this copy-book’, says Tigran and laughs.

‘While looking at the copy-books, you can find out all the nicknames of the villagers, and by adding and removing the debts, and looking when they are paid, you could guess who has what income and when they receive money’, he says.

Where the water comes from

Water lorries bring water from the town of Talin, about 40 kilometres from Armavir. They buy it from a local water treatment plant, the quality of which is checked by the government.  To fill the cistern with 5,000 litres costs 1,500 dram ($3.10). Fuel from Talin to Karakert and back costs around 2,000 dram ($4.20).

‘I don’t complain about my work, it’s a hard job, but I am blessed by the people I meet, they like me for bringing water to them, and I have a large income. But one day I will not be able to do this because I feel that Talin’s water is running out too. In the past, the cisterns were filled in 5 minutes, now it takes about 40 minutes to fill each lorry with water’, says Tigran. 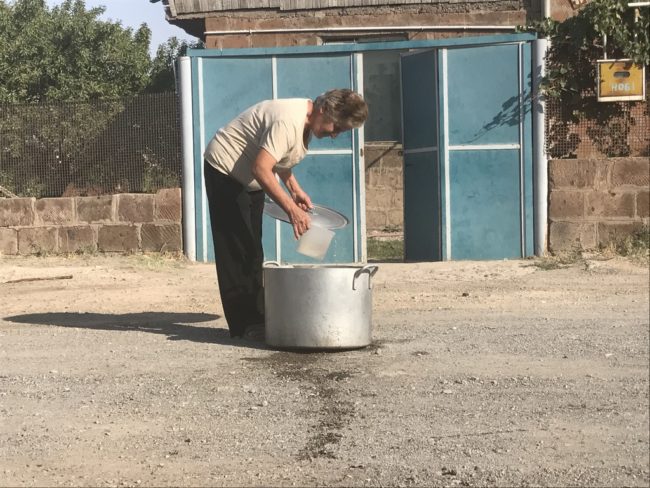 In the late 1990s, with the support of the German government, a major overhaul of the water supply network began in the city of Armavir and surrounding villages. At the same time, 11 artesian wells were dug to supply drinking water. All villages in the province receive water from these wells, but it can only be used for irrigation.

‘When I was elected in 2008, we installed a water system and our village got water, but it’s not fit to drink. It has a hard and unpleasant taste and we can’t swallow it. With this water my family irrigates the back garden’, says Mher Hartenyan, the village head of Karakert.

‘There is no source of water in our region, the nearest source is too far away. We would need a lot of money to bring normal water, but the state does not have the money to provide it to us, everyone knows this, the issue has been discussed by the government many times, we are still waiting’, he says.

‘At the moment we are repairing 2 kilometres of water pipes and 700 meters of new pipes are being installed, so that we get at least the artesian water for the whole village, and we are grateful that we have this water’, says Hartenyan.

‘We always have water from the tap, but we can’t even take a shower with it, it irritates my skin. I’m an old woman, 60 years old, I have got used to this water but I don’t let my granddaughter take a shower with it, she is only six years old, the kid’s skin is getting damaged from this water’, says Yelena Sahakyan, who pays for both the water brought from Talin and makes state payments for tap water, according to how much they consume.

‘One water bill is 180 dram ($0.40); I basically just water my garden with this. I’m at least thankful that this burden is alleviated. About five years ago the water they call “artesian” was very dirty when I turned on the tap, worms and mud came out of it, now pure water flows. I will not say and repeat 1,000 times that it is not fit to drink. Though 1,000 times the same thing should be said so at least our great grand children will be able to have clean water in their homes’, says Yelena.

There have been several cases in Armavir Province in which people have contracted an infection because of the water, as well as cases of epidemics.

‘There are thousands of illnesses, it’s better to drink the tested water from Talin’, say the people of Karakert, as they take their boilers filled with water to their houses, to clean the dishes and to cook with.