Armenia: RSF calls for end to impunity for police violence against journalists 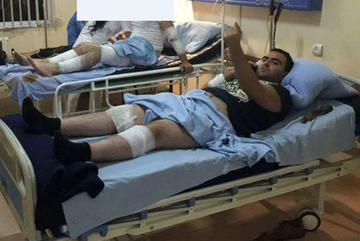 Reporters Without Borders (RSF) condemns the violence used by police against journalists while dispersing a demonstration in Yerevan on the evening of 29 July. At least 12 journalists were injured.

Plainclothes police armed with batons and steel bars hit three reporters with the Armenian service of Radio Free Europe / Radio Liberty who were clearly identified and who were filming the events. Reporters and cameramen with A1+, CivilNet, Arachin Lratvakan, Panorama.am, Lragir.am and the Russian TV channel Life were injured by smoke and stun grenades fired by the police.

Two journalists with state-owned Armenia TV were hit by individuals in civilian dress who also smashed their camera and microphone. Several journalists had to be hospitalized with burns and other injuries.

“Some continued to be beaten after promising to stop filming. Such behaviour must be punished so that it does not recur. We urge the authorities to end the impunity for police violence against journalists and to give the police clear instructions not to do it again.”

The police have promised to conduct an investigation in order to shed light on what happened. Last year, 21 journalists were the victims of abuses in similar circumstances but only one investigation was carried out into all the various individual cases and no one was ever charged. Incidents of this kind often recur in Armenia.

The demonstration on 29 July was in support of a group of hostage-takers who had seized a police station in Yerevan. According to a health ministry communiqué, 73 people were injured, including police officers.