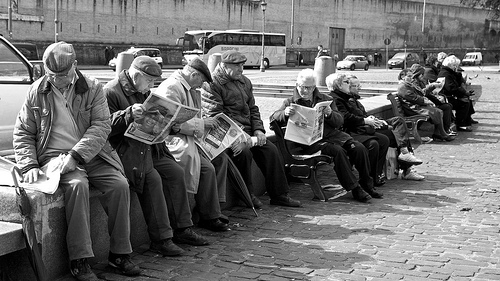 Being a journalist in Albania is a difficult job. So tells us Axel Kronholm, a Finnish journalist who devoted his dissertation to press freedom in the country

Albania, with a population of 3 million, counts approximately 300 media. Is this not a huge number?

Most of these media are small and/or local. Last year there were 26 national newspapers published in Albania, with a combined circulation of no more than 70,000. In addition, there is a large number of local radio and TV stations. It is not so strange if considering the recent past of dictatorship. Since the media market opened, along with the whole of society, an impressive number of media have sprung up across the country.

How do they survive?

It depends on what media you mean. Mainstream media manage to survive on the advertising attracted from the very fact of being the biggest. The large number of different newspapers is explained by the fact that many of them are part of – and supported by – another company for which that newspaper or television is an investment, a tool of influence. Basically, they work as a public relations organ for the particular activity and can be used both to attack politicians or court them with reports in their favour. In a sense, I believe it is also a matter of status for businessmen.

Freedom House and Reporters Without Borders reported that media freedom in Albania is getting worse by the year.

Journalists and media in Albania are facing constant and certainly "significant" pressure from the government and business - often these two elements are not so easy to separate. In 2011, several journalists were assaulted while reporting on the violent protests in January.

How do government and business manage to influence people in the media?

In several ways, the most direct being money. At the risk of being a bit simplistic, one could say they buy media. Given their difficult financial situation, Albanian media are dependent on advertising. The government has an advertising budget for all of its ministries - a total of about 15 million Euros per year. Most of this money is given to pro-government media, thus punishing the opposition media. This practice has been described by almost all journalists - from both sides of the political spectrum - I interviewed for my thesis.

Private advertising is based on similar principles. It is difficult to separate politics and business in Albania, they are closely interconnected. The media landscape here is polarized along political lines, which means that if a company advertises itself on the opposition media, this is seen as an active support not only to the media itself, but to the opposition too. Business owners are well aware of this and know that their choice of media-partner will have an impact on their relations with the state.

Is there any kind of censorship or self-censorship in place?

Not censorship in the literal sense of the word, with a censor state that controls what is published. However, there is a problem of self-censorship, which has a lot to do with insecure forms of employment of journalists and the informal labour market. Most journalists work without any kind of contract. In addition to the potential risk of losing their jobs or not being paid, there is a concern about physical pressure. Fortunately, attacks on journalists are not daily occurrences, but the mere risk makes the work environment even more uncertain.

Of course, it is difficult to measure self-censorship. The only thing I could gather from my conversations with Albanian journalists is that they see it as a serious problem and that many of them are practising it, one way or another. Freedom House has described this phenomenon as "common", something that journalists see as necessary to keep their jobs or advance in their careers.

How important is the union of journalists (UAJ) in Albania?

The informal labour market is a problem in all sectors of Albanian society, not only in the media industry. I think that Albanians would have much to gain from the strengthening of unions and associations. The UAJ does a good job, but unfortunately its influence is limited. One reason is, of course, the polarized media landscape, that makes it more difficult for the profession to work together as a whole to a substantial change.

Many brilliant journalists in Albania have left journalism or have left the country in recent years...

This has also to do with the media's financial situation. It is difficult to retain talent in the profession if you cannot afford to compete with the salaries that these brilliant journalists can get in other, often more secure, jobs. Of course, it is a very worrying development which is further undermining the role of the media as a force for social change. Losing talent also means that journalists, in general, are more vulnerable to political pressure.

So how is it to be a journalist in Albania, from the economic point of view?

This brings us back to the issue of informal labour and labour relations in Albania. Ilda Londo from the Albanian Media Institute, has done a very interesting study about labour relations in the media in 2007. In short, and in general, I can say that most journalists face problems with salaries and late payments. Delays of up to two months are not unheard of. As Londo shows, in addition, journalists are not confident in their job security, even if they are working with a contract, which is unusual. Such insecurity undoubtedly encourages self-censorship, since journalists are aware of the specific interests of the owners or publishers of the media.

Is there investigative journalism in Albania?

I think that, despite the obvious dangers, there are many courageous journalists in Albania who put themselves on the line to bring important stories to the public. Only in recent years, Albanian journalists have denounced corrupt ministers and discovered massive illegal importation of toxic waste. That said, there are obviously still many topics which are "off limits", so to speak, in the sense that they involve great risks. Organized crime is the most obvious example, but there is a handful of courageous journalists who deal with these kinds of stories. What worries me is that there may be fewer and fewer such investigations. Investigative journalism is expensive and time-consuming, but it carries no advertising – quite the opposite. In addition, investigative journalism is not without risks for individual journalists. This does not bode well.

And what about access to public records and data? Is this a problem for journalists?

Yes, it is. Of course, it depends on which journalist requests which documents, but in general the right of citizens to access information within the regulated waiting time is not respected.