Vučić in Tirana: all together for... Germany! 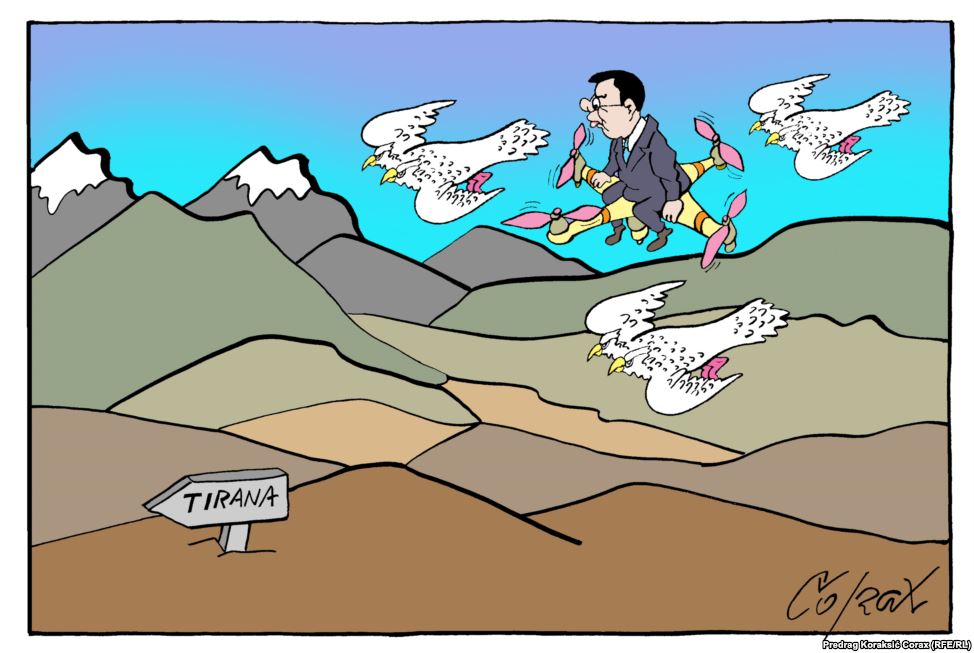 A cartoon by Corax on Vučić's visit to Tirana

Serbia's Prime Minister paid a historic visit to Albania last week. Major disagreements remain, especially over Kosovo, but great cordiality was expressed. In the background, the need for collaboration on major infrastructure projects for the region

Each path has its way back. Yet, Aleksandar Vučić's trip to Tirana was different from the one Edi Rama paid to Belgrade – not just because, this time, drones and balloons remained off the picture, but because the political moment "called for responsibility". Sandwiched between the summit of the South-East European Cooperation Process (SEECP) and the 2015 Tirana Talks at the Vienna Economic Forum, Vučić's historic visit – the first a Serbian premier pays to the Albanian capital – transcended its bilateral dimension and was experienced with an unusual sense of scale. Both leaders contributed to frame Serbian-Albanian relations within a regional vision, in view of the common European destiny.

What paradoxically contributed to this success – announced by the pacifying statements made by both parties – was the difficult situation in Macedonia after the clashes in Kumanovo. Neither leadership showed interest to take sides in this potential conflict – Rama had played down the ethnic tensions throughout May, while Vučić happily left it to the Serbian media to evocate the ghost of "Greater Albania", as pointed out by Dragan Janjić, and was therefore able to benefit from the Kosovo issue temporary fading into the background and present himself as the leading promoter of regional stability.

The overblown relevance of the SEECP

The day before Vučić's arrival, in Tirana the annual summit ended of the South-East European Cooperation Process, a Regional Cooperation Council initiative launched by Bulgaria in 1996 and chaired by Albania last year.

In accordance with the organisation's objectives, the Heads of state and government present (Serbia and other countries were absent) reaffirmed European integration as the sole prospect for Balkan countries. President of Albania Bujar Nishani stressed the need to establish good neighbourly relations within a region that remains "fragile". He was echoed by Bulgarian president Rosen Plevneliev, who did not hesitate to comment on the Macedonian question and the issue of misplaced borders: "We do not only want borders in the Balkans not to be changed, we want them not to exist. During our presidency of SEECP, starting next June, we will submit a declaration reaffirming each country's territorial integrity".

On the other hand, Romanian Prime Minister Victor Ponta reaffirmed "the total support" of Romania and Bulgaria (both EU members since 2007) to all official candidate and potential candidate countries in the region and urged Brussels not to give the impression of having "closed the doors". Kosovo president Atifete Jahjaga emphasised that the EU project has brought not only political stability, but also an increase in prosperity: "The integration of such a system of values is a guarantee for the development of all our countries".

Vučić and Rama during the Tirana Talks

As overblown and banal as these claims may appear, the European narrative developed at a table that has the merit of bringing together top representatives of member, candidate, and potential candidate countries undoubtedly acted as a premise to the incoming visit, which somehow perpetuated its vision.

A Serb in Tirana

The visit of May 27th was met with tight security: since the day before, parking had been banned on the main arteries of the capital and entire areas were closed to traffic. About a thousand armed units were deployed on the ground between police and special forces, while army helicopters kept watch on the routes.

Vučić landed in Tirana in the morning. The welcome ceremony was held at the Palace of Brigades, where the notes of the Bože pravde hymn accompanied the hoisting of the Serbian flag. The welcome followed the Albanian state protocol, though the symbolism had created some suspence in the media – according to Albanian newspapers, in Belgrade no double-headed eagle had welcomed Rama's arrival.

The usual protocol platitudes were followed by a one-hour long face-to-face meeting between the two delegations until about noon, when the two leaders came out for the long-awaited press conference. Six months earlier , in the Serbian capital, Rama's explicit mention of Kosovo had sounded provocative; it was, in all probability, a unilateral move which deliberately disregarded what had been agreed behind closed doors. Right from the start, a very different climate surrounded the meeting in Tirana – the leaders looked relaxed and approached the podium smiling.

Reaffirming a pro-European stance, already taken on the eve of the summit with targeted statements to Serbian media, Rama begun by referring to the "courage of France and Germany", a lesson that "should inspire us to transform this moment of peace between us into the first step for the construction of a sustainable inter-ethnic, inter-religious, and inter-state coexistence".

The Franco-German metaphor was not one to go unnoticed, and Rama insisted: "Relations between France and Germany are said to represent the axis of Europe. I hope not to appear immodest if I say that Albanians and Serbs want to become an equal example of how success and peace can be jointly achieved even after a history of bloody wars".

Rama's speech was based on the concept of the common responsibility both parties need to take before Europe, and only tangentially mentioned the "infinite spaces of opportunity" that may result from an effective exchange between the two countries – an allusion to the potential improvement in trade relations (in 2014, less than 1% of Albanian exports reached Serbia).

Vučić used a decidedly more restrained and less pro-European rhetoric, but went straight to the heart of the problem: "The big divergence between Tirana and Belgrade on Kosovo's status should not be an obstacle to our bilateral relations. It is a fact that we disagree on this: Serbia treats and will continue to treat Kosovo as its constituent part, while Albania considers Kosovo an independent state. However, I believe that this does not mean that we cannot soften the differences with dialogue".

Having thanked Rama for the welcome, Vučić said he was "proud" to be the first to visit Albania: "Someone in Serbia will make noise for my visit, as I imagine will happen to Rama for inviting me. But my duty is to look to the future, and future relations between us are very important... We think differently, speak differently. But this is no obstacle to working together". Without going back to virtuous historical precedents, Vučić agreeably continued on the notes of Rama's narrative, starting from the fact that "for the next hundred years we will be the two largest countries in the region" and Serbian-Albanian relations will be the backbone of stability of the area: "If we are responsible, wise, and intelligent enough, if we do not think of solving our problems with conflict, but with dialogue and frank, open, and honest relations, then I am sure that Serbia and Albania will have a future which will be better than the past. We cannot escape history, but our eyes will be turned to the future, so today I am here to give my colleague Rama the hand of friendship".

In the afternoon, Vučić was received by president Nishani, parliament spokesman Meta, and mayor of Tirana Basha. The first day of the visit ended with a meeting with representatives of the Union of Serbs in Albania, a northern minority Vučić claimed more attention for by the Albanian authorities.

The idyll did not fade into Wednesday's sunset. In a climate soothed by the diplomatic duet of the day before, the Tirana Talks of the Vienna Economic Forum opened on the morning of May 28th. The discussion table was created in 2004 to promote strategic investments in the Balkans, which explains the composition of the Serbian delegation, including also Zorana Mihailović, Minister of Housing, infrastructure and transport. Moderated by former German Foreign Minister Joschka Fischer, the event was attended by the Prime Ministers of Albania, Serbia, Macedonia, Montenegro, Bosnia, and Kosovo (the former Italian Prime Minister Massimo D'Alema was also present).

In a nutshell, the second day of the visit explained the reasons of the bilateral rapprochement: following the Berlin Conference of last August – an initiative of Chancellor Angela Merkel – the "apple of concord" was represented by the regional projects that can be financed during the accession process by the EU or by individual European partners. The first is a highway linking Belgrade to Tirana, perhaps passing – with considerable symbolic value – from Kosovo. As the Germans were able to explain to the Balkan partners, regional stability is the prerequisite for the implementation of those infrastructural networks necessary to integrate the Balkans into the network of the European economy. These transnational projects require the commitment of all, because all will benefit.

The Tirana Talks showed it was the theme of funds that brought Rama to Belgrade and Vučić to Tirana. "The time has come for all the Balkan countries to share a formal commitment in considering South-east Europe as their common home, in order to lead Europe to relate differently with the entire region", said Edi Rama. In turn, Vučić reiterated his full willingness to work on infrastructural joint ventures, trying to secure the European support on joint projects: "We have had enough seminars, now we need money to build roads and highways. The people of the Balkans should not be underestimated, as they expect concrete results".

Of note, finally, the small groups that took shape on the sidelines of the conference. As one could imagine, one was formed by Edi Rama and Isa Mustafa – an Albanian-speaking pair that Vučić joined to shake hands with the Prime Minister of Kosovo , sealing the two days of dialogue with a gesture for the cameras. 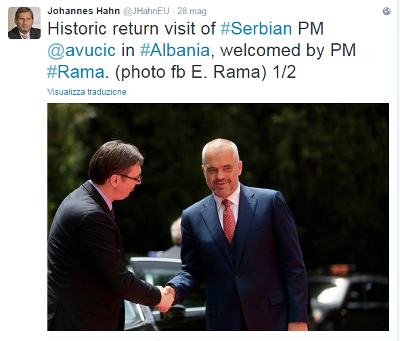 Before leaving Albania, Vučić expressed to Top Channel his "deep gratitude" for the welcome. "This will not be my last visit to Albania", he added.

Beyond the evocative European narrative used by Rama, the German reasons – borrowed from the Vienna forum – have become the reasons of Serbia and Albania. This is good news, because – as shown by years of stabilisation process - economic, energy, and infrastructure integration in the region should precede the institutional entry of individual countries in the Union. We know that in its external relations the Union uses the economy and the prospect of enlargement. In this view, the promise of Thessaloniki 2003 is the same as in Berlin 2014: to integrate the Balkan Peninsula into continental Europe's network of well-being. "Make peace, and investments will come".

Now, without dismissing the enormous bilateral progress made, wondering how much of Germany and Europe is in Vučić's top-grade conduct in Albania is not a divertissement for political scientists – it remains a substantial issue. Because last summer in Berlin, Barroso, Oettinger, and Füle were mere observers of the German initiative. A confirmed spectator was today Johannes Hahn, Commissioner for the European Neighbourhood policy, who posted on Twitter the photo of the historic handshake between Rama and Vučić: "I congratulate both leaders for their constructive and responsible approach".

From the European point of view, the reality is less rosy than it sounds: over ten years after the all-political Prodi Commission presented in Thessaloniki with the Constitutional Treaty in one hand and the confirmatory referenda ofseven Eastern countries in the other, in a Tirana positively brewing with excellent intergovernmental intentions, what impresses is the tragic absence of EU institutions.