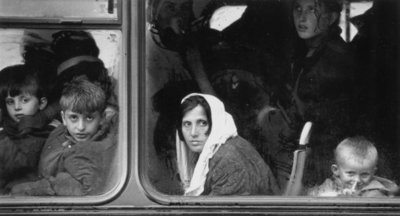 It was 1999 and refugees from Kosovo began to pour into a disoriented and torn-apart Albania. The 1999 crisis was a human drama, but it was also an occasion for two communities, divided for decades, to come together and tear down some national-romantic myths

Ten years ago, while the last Yugoslav conflict was unfolding in Kosovo, Albania was a disoriented and torn apart country. It had just recovered from the financial and political crisis of 1997. The government continued to call upon citizens to decommission their weapons, most of which were acquired in 1997. The Kosovo crisis was observed with the same indifference and rhetoric used earlier to comment on the war in Bosnia. This commentary often came from journalists who had never had the chance to visit Kosovo before.

But '99 was also the year when the terrifying ghost of war in the Balkans started to appear closer than ever, interrupting the isolation which continued to keep Albania immune to what was going on in the rest of the Balkans in the '90s. The tightening of security controls to the north by special military patrols and the rapid influx of more than 400,000 refugees from Kosovo were the signs of this specter. These refugees started to cross the border, waking Albania to the fact that the conflict was not just something which could be watched with indifference on the TV news.

Fear began to spread that the Kosovo conflict might spill over into Albania, causing a direct conflict between Tirana and Belgrade. Prospects were uncertain in such a moment of political tension. Sali Berisha, who went out of the crisis in '97 defeated and discredited, was at the helm of the opposition whereas the left-wing, led by the Socialist Party of Fatos Nano and Prime Minister Pandeli Majko, was in power. The ambiguous relations between the two major blocks in Albanian politics - and between their leaders - and their connections with different political actors in other Balkan countries made it impossible to predict the possible scenarios.

With the start of NATO's military intervention, the Albanian news media began to follow the events in Kosovo more closely and the conflict was reported in all of its cruelty through the testimonies of refugees. These were desperate people who joined in a mass exodus to seek refuge in Albania, a place they had always dreamed of and imagined as in the stories of their elders. Most of them were visiting the much yearned for "motherland" for the first time. They only had emotional, national-romantic notions of the land and, in the end, were overwhelmed by political and regional prejudices and suffered from a total lack of knowledge about the reality.

The connections which developed between the Albanians from Albania and the Kosovars during the crisis of '99 turned out to be an important phase in the development of inter-Albanian relations. The impact of these events can now, 10 years later, be clearly seen. The refugee camps set up by the many local and international NGOs became a pilgrimage site for Albanian media for months, offering an intricate profile of the newcomers, of their expectations and their past.

Finally, the encounter became real by virtue of direct human contact when 300,000 Kosovars were hosted by families in Albania. In terms of geographic scope, this phenomenon was massive, both in the northern areas closer to Kosovo as well as the deep South of the country.

In the collective Albanian imagination before '99, Kosovars were represented either by the perfectly integrated communities which had settled in Albania from Kosovo in the first half of the 20th century or by the novel Kosovar businessmen who came to Albania after the end of the country's regime in the era of the big privatizations and speculations. The refugees from '99 brought a broader perspective of Kosovo as their social backgrounds and geographic origins were much more diverse. What they all had in common, of course, was that they were undergoing difficult times.

In those months, Albania seemed to live a new phase; a sort of digression from its own internal crisis. The ruling party and the opposition found themselves on the same page concerning the humanitarian crisis and the need to internationally promote finding a solution for Kosovo, thereby establishing Albania as a player in the international arena.

The solidarity demonstrated by Albanian citizens has been unprecedented and unrivaled since. Citizens voluntarily offered food and shelter in their modest homes to the many Kosovar families whereas, according to many subsequent analyses, NGOs and government bodies did not manage the crisis effectively. Only 80,000 Kosovars chose to stay in the camps managed by NGOs and the government.

The first camps were set up in the North just a short distance from the border - a dangerous location for the refugees. Subsequently, new camps with much better living conditions were set up near major Albanian cities and in the South. At first, Kosovars hesitated to move away from the border and towards the South in part because their proximity to the border allowed them better access to information about what was going on back home. Some of this information was coming by way of men from the KLA (Kosovo Liberation Army) who were in charge of recruitment.

But there was also another motive which was widely discussed by the Albanian news media at the time: many Kosovars did not want to move south - even though they knew that living conditions would be much better compared to the impoverished North - because they feared possible hostility from Albania's Tosk population. Northern Albania, which is traditionally Gheg, is culturally very similar to Kosovo and inhabited by many distant relatives of Kosovars, was perceived as a safer refuge.

Ten years ago, Albania had just emerged from the '97 crisis and the country had assumed a dimension of the conflict between the rebel anti-Berisha South and its loyalist North. Kosovars identified with Berisha and his nationalist supporters in the North whereas the South was perceived to be controlled by the Greek-loving and Slav-loving socialists of Fatos Nano.

Among other factors, the Albanian North had natural economic connections with towns in Kosovo and cultural, economic, and family links had always been very strong, even though they had suffered a long interruption in the years of the Enver Hoxha regime. Many people from the more distant parts of Kosovo imagined that the Albanian South was inhabited by Greeks who were often called by the same derogatory name used for Serbs - shkja.

However, the facts on the ground countered the predictions. The Albanian left-wing proved very motivated to support Kosovo internationally, forging links with the KLA, in contrast with the traditional skepticism expressed by the Socialist Party leader Fatos Nano. In this exact period of time, project ideas for a big Pan-Albanian motorway to connect Duress with Pristine started to circulate - a project which has been supported with great national-patriotic pathos by all Albanian governments since '99.

The leader of the right-wing, Sali Berisha, found himself voiceless in Tirana. Being part of the opposition, a fact which forced him to skeptically oppose the initiatives of the government, he expressed little faith in the KLA and accused the Majko government of playing a Serbian game and of manipulating the international assistance provided for the humanitarian crisis.

The humanitarian crisis enabled an encounter between Albanians in the name of international solidarity which, nevertheless, did not grow into Albanian civic activism in support of Kosovo's independence. But the experience of the Kosovo refugees also revealed a disillusionment and rationalization in terms of their relationship to Albania, a place which, until then, they had imagined as a romanticized homeland. The linguistic, cultural, and historic differences between the two communities emerged, subsequently creating many anecdotes. There were instances of unpleasant episodes as Albania was still in crisis: shooting continued in the peripheries making the traumatized Kosovars feel they were still in Kosovo and still in danger. The abject poverty in the North and the lack of infrastructure all over the country certainly made an ugly impression.

Back in '99, Albanian media defined that year as the beginning of a new phase for Albanians in the Balkans. It was definitely the year which marked the opening of Albania towards the Balkans. It also established the official political position of Albania as a factor of peace and stability in the Balkans; of an Albania which promotes Euro-Atlantic integration in order to eliminate borders rather than to change them. A realistic relationship between the Albanians from Albania and those from Kosovo started to emerge and, after the conflict, Albania became a destination for patriotic tourism from Kosovo and Tirana resumed exporting culture to its neighbor.