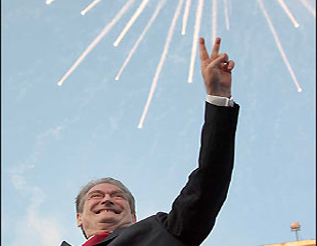 The Albanian Prime Minister, Sali Berisha, has proposed constructing a nuclear power plant in Albania. The Berlusconi government in Italy is the first strategic partner to receive his request for cooperation. Experts and analysts interpret the proposal as a joke; environmentalists again suggest alternative sources

For a few months, the nuclear energy option has been added to the debate about Albania's obsolete energy system and the strategies for dealing with continuing crises. For months, politicians and media shift between euphoria and disbelief at the completely new idea of a nuclear power plant. The news arrived in the middle of winter, while KESH (Albanian Power Corporation) regularly provided updates on their timetable for electrical power cuts. In describing the proposal, Prime Minister Berisha announced that a company was willing to build and technically manage the plant.

A nuclear plant has never been considered in Albania, and given that such an option was not even vaguely addressed in the government's long-term program, many analysts and politicians did not consider it worthy of debate. Some dissenting voices came from the opposition, who suggested putting the idea to a referendum. Most observers interpret the nuclear power idea as one more of the Prime Minister's many drastic and creative inventions, such as 'Albania 1 Euro', or 'Zero Tolerance', which fought illegal migration by prohibiting private boats from sailing in Albanian territorial waters.

Berisha nonetheless seemed convinced and, regardless of the sceptics, he publicly declared the start of construction for the nuclear plant's necessary infrastructure. He even sent the documentation for inspection at the International Atomic Energy Agency's head office in Vienna, Austria.

The Prime Minister claimed that his intention to bring nuclear power to Albania would end forever the energy crises periodically plaguing the country. Although dozens of licenses for construction of thermal and hydro-plants have been issued over the last years, results failed to materialize over the short term. The Prime Minister labelled the current system as 'unstable and insufficient because it depends on weather conditions.'

Nuclear power instead has been praised for its stability and the enormous productive capacity, which would meet Albanian energy needs and would bring back the years when the newly constructed Albanian power plants exported power. The Prime Minister has enthusiastically identified a strategic area, around Durrës, where the plant could be built because of its direct access to international transport routes.

Initially, Berisha stated that he had had been negotiating with the US company Westinghouse, which was allegedly interested in building the plant. Then, an anonymous French-Swiss consortium was mentioned, and, finally, the Italian company, Camuzzi S.p.A., which, according to the Albanian press, had already visited the site to explore the terrain.

'It will fill the void created by the closure of the Bulgarian plant before its accession in the EU,' underscored Berisha, coining the phrase which is becoming a slogan of national pride, 'To make Albania a small energy power.' Berisha did not miss the opportunity to use different meetings of southeast Europe political leaders and invited Balkan neighbours to get involved in the project, and to join the list of beneficiaries of the Albanian plant, which would resolve everybody's problems.

For the time being, according to Albanian media, Greece has expressed concern, and Montenegro its vague interest,. Unexpected reactions however came from distant Iran, which said Western states would display double standards if the Albanian request to build the plant were approved. Nonetheless, despite the Prime Minister's eagerness, nuclear power has not been taken seriously in Albania, and many see it as an absurdity.

Diverse journalists and economists have questioned the possibility of this type of project, which would require both long years of bureaucratic procedures whose final outcome is unknown and would require Albania to invest almost half of its GDP in the power plant, which would make the entire venture unsustainable.

Thus, Berisha has started to look for partners among stronger neighbours, beginning with Italy. Several representatives of the Italian energy company, ENEL, accompanied the former Italian Prime Minister Romano Prodi during his last visit to Albania. They gave muted signals that have been interpreted as generally favourable of Berisha's nuclear initiative. Berisha's requests seem to receive direct support from the current Italian government of Berlusconi. This was also evident from former Finance Minister Giulio Tremonti's campaign statements declaring Italy's intention to support nuclear plants in Albania or Montenegro.

In an interview in the May 29 Corriere della Sera, Berisha enthusiastically stated: 'Nuclear: Yes, Please!', because 'Albania is a country open to everyone', and 'Albanians should not be denied the opportunity to benefit from this immense resource.' Moreover, Berisha declared, if Italy does not want to help, he is determined to provide his country with a nuclear plant through other partners.

The interview for Corriere della Sera was translated, summarized, and interpreted by most Albanian media. 'The location for building the plant indicates that our Prime Minister seems less concerned with the energy for the Albanians, than with energy to export to Italy.', says Fatos Lubonja. After many licenses for coal-burning thermal plants, and subsequent Italian and Greek investment, which Berisha has zealously called 'clean energy', environmentalists and journalists in Albania have the feeling that their country is being turned into a recycling dump or storage of facilities that no one wants at home. 'Our Prime Minister is trying to use our Albanian land more or less the same way the Camorra used the Campania, to store and profit the waste of the rich North', accuses Lubonja.

Berisha, in turn, justifies his determination to introduce nuclear energy with the claim that it is 'safer then usually thought.' Furthermore, he frequently emphasized that the plant would use the still unavailable 'fourth-generation' technologies.

The recent incident in Slovenia's Krško nuclear power plant caused Albanians to reflect on the huge risks related to a nuclear plant, and reawakened the spectre of the explosion at Albania's Gerdec munitions depot caused by a total irresponsibility for security and controls. This attitude, which is by no means an exception in recent Albanian history, could have much graver consequences with a nuclear plant that would also affect the currently supportive neighbours.

In the meantime, experts and environmentalists continue to fill the press with proposals for revitalizing current structures, or using alternative energies more appropriate for Albania.