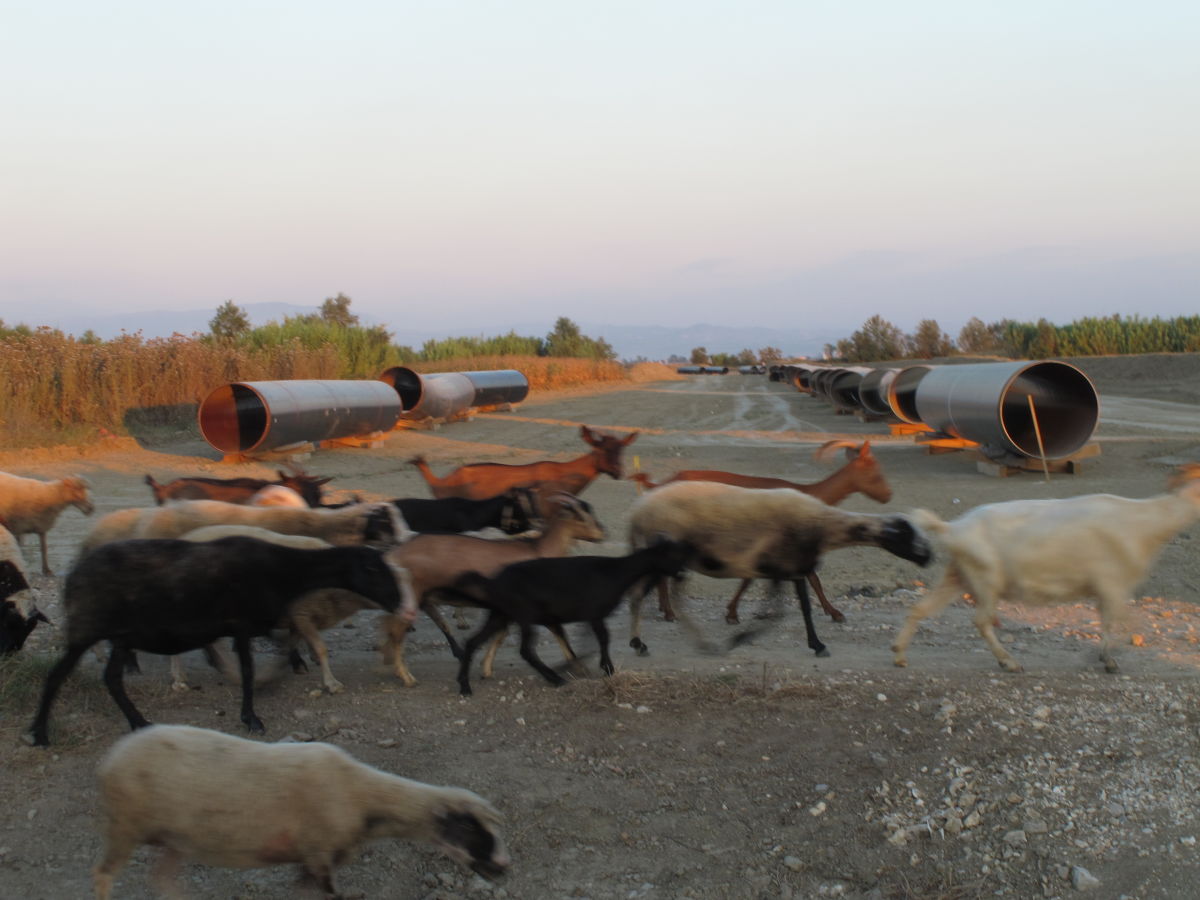 (Originally published by Bankwatch , on december 2016)

“In Albania we are satisfied even with little,” A. said with a melancholic smile. He was standing next to his horse-drawn carriage to which he and his wife were loading large corn bundles, or stooks, from the last strip left of a field they used to work since years. The rest of that field has been converted a month earlier into a 25 meters wide barren stretch of land, earmarked for a gas pipeline that begins more than 3000 kilometres away.

The Trans Adriatic Pipeline, TAP, is part of the Southern Gas Corridor , a chain of conduits planned to deliver 10 billion cubic meters of natural gas from Azerbaijan to Europe every year, and 6 billion cubic meters to Turkey. This huge undertaking is the largest infrastructure project the European Union is currently involved in, and the stakes are high.

But on the ground, many people feel they are sidelined – particularly those who own lands where the TAP’s dark, huge tubes are to be laid.

In late August a joint fact finding mission of the Albanian Helsinki Committee and Bankwatch visited over 30 communities across Albania affected by the TAP project.

In the outskirts of the village of Seman, barely eight kilometres from Albania’s Adriatic coast, A. and his wife were just about to call it a day when we met them on that summer evening. A few meters away, a trail of dark metal tubes, each of about two meters in diameter, was waiting to be welded together and laid to the ground. At the time they seemed like a harmless playground for the village children. 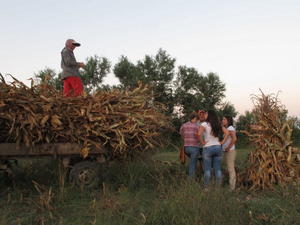 Yet, the couple’s case was among the more complicated ones we have encountered.

Over the past 25 years, since the fall of Albania’s isolationist communist regime, the state has been struggling to introduce a land ownership system. Winding through a nearly 900 kilometres route, the TAP project has triggered a land survey operation across the country to identify the owners of the different plots the pipeline will cut through, but it has been a long and bumpy ride.

For the Seman couple, the corn field used to be their main economic asset. Representatives of Abkons, TAP’s Albanian contractor, offered them compensation for the loss of harvest based on a calculation that is unclear.

When we asked A. if he believes this calculation also reflected their future losses a few moments of silence ensued. He was evidently puzzled. And then upset.

When the couple were offered a 7-digit sum of money, he later confided, they thought they just cannot afford refusing. Like many others, they simply accepted they will need to give up their field. They did not protest because they never thought there might be any alternative, that there is anything they can do about it.

We heard very similar things from people all along the pipeline route. Many were unhappy with the level of compensation offered to them, especially owners of tree plantations.

At the late summer months, dark, juicy plums are hanging on the trees in plantations across central Albania. Once picked, these plums are often used for rakia, a fruit liquor that is a Balkan staple. But for some farmers, this might have just been the last harvest. Even once the TAP construction works are over, no trees – plums, olives or others – can ever be replanted on that strip of land.

So families who have subsisted on agriculture for generations are now understandably concerned. Some told us they have refused to sign the lease contracts. But many others are reluctant to challenge the authorities and representatives of the companies who come equipped with piles of documents in undecipherable legalistic lingo.

And just like the Seman couple, the vast majority of people we had met said they felt poorly informed about the entire process, what the constructions works would entail, and to what extent their livelihoods will be impacted. Most people were not even able to say when the works will commence.

In the village of Otllak, in the Berat County, the large olive grove on the hills overlooking the village are the only source of income for Arjan and his 12 relatives. And he is deeply concerned he could lose it to the TAP pipeline.

The olive grove has over a hundred trees, many of them are about 70 years old, and they provide Arjan’s family with a total income of around 3.5 million Albanian lek (EUR 25,400) per year.

At the end of August the trees were heavy with olives which were to be harvested about two months later. Some branches had, apart from the nearly ripe olives, white-red ribbons of the kind used for delineating a crime scene dangling from them, marking the designated pipeline route.

Workers surveying the area, Arjan told us, had entered the grove without asking for permission or even informing him in advance, even though he had refused to sign the contract with the company.

Several days before our visit, Arjan added, he received a phone call telling him he had two weeks to cut down his entire grove, on his own, to make room for the construction works.

Only few grapes were still left in the vineyards of the Zylyftari brothers in the small village of Buzuq. TAP employees who had entered the vineyards – again, without any prior notice – left several round metal markers cemented to the ground.

Stretching along the banks of the Osum river, the vineyard was planted about 12 years ago, but the family had owned the land since 1912.

“The project will be carried out anyway, there is no turning back. But we just want everything to be evaluated according to the rules, not making fun of us,” Sabri, one of the brothers, told us.

Just like in Seman, Otllak and many other communities, the brothers were deeply frustrated with the level of compensation they had been offered, and could not explain the methodology behind the calculation.

Their neighbour, Natasha, could not even tell whether she would be able to continue living in her own home. The blueprint attached to the agreement documents she had received shows the pipeline crossing through her yard, just a few meters from her house. 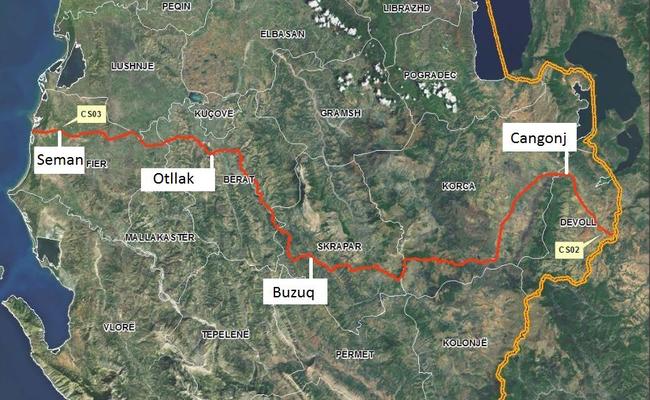 To build the house her husband and her had to find work in Greece. “We would work there for five months and then we would come here to continue the construction of the house,” she told us. The construction was eventually completed in 2000, but now she is not sure what will happen to their house.

“I haven’t received any answers about whether the house will be demolished or damaged. Nothing,” she said. “They told me, ‘when the construction starts we will clarify the issue.’”

A few people we had met were hopeful that even if they aren’t happy with the TAP project, it might at least provide some much needed employment to local communities. In reality this is hardly the case since most of the qualified workforce in the project is brought in from abroad.

A job advert we spotted in Seman made for a blunt illustration. In it the French company constructing the pipeline was recruiting for employees without qualifications for a period of no more than two months.

Nevertheless, many were not willing to give up. Farmers in the village of Cangonj, about eight kilometres from the border with Greece, have decided to fight back. They have organised and sent a letter to the management of TAP in Switzerland protesting the plan to build the pipeline through their plum plantations. No less than 120 people had signed the letter, but more than six months later they still got no response.

Across the border, Greek farmers have been protesting the TAP project which they fear is about to similarly strip them from their main source of livelihood.

The European Investment Bank (EIB) is currently considering a EUR 2 billion loan – its largest ever – to the TAP project. In response to several complaints lodged with the bank by Albanians affected by the project, the EIB’s complaint mechanism informed us they are planning to visit the affected communities.

Yet, it increasingly seems that the EU’s dash for Azerbaijani gas is set to leave a deep scar on the Albanian countryside and people.