A new President for Abkhazia 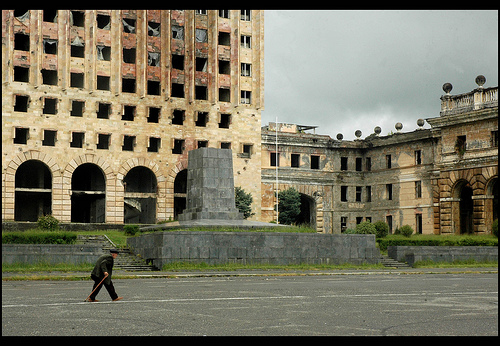 Acting President Aleksandr Ankvab won the 26th of August elections in the self-proclaimed Republic of Abkhazia. The reactions in Moscow, the statement of the new President on the future relations with Georgia

The elections in the self-proclaimed Republic of Abkhazia were carried out peacefully, the results not being fully foreseeable. After the death on the 29th of May of President Sergey Bagapsh, Presidential elections resulted in the hand over of the presidency of the Republic – de jure for Russia, Venezuela, Nicaragua, Nauru, Vanuatu, de facto for the rest of the world – to Aleksandr Ankvab.

On the 29th of June 2011, Russian Agency RBK had published an interview with Aleksandr Ankvab. The title of the interview was “Abkhazia needs a German management and billions of roubles ”. That very day, a civil initiative applied to register him as a candidate for presidential elections. In the interview, Ankvab spoke in his role of acting President. The interview mirrored his election program which, together with his personality, made him clearly prevail on contenders with 55% of the polls, a sharp majority at first round, versus 21% to Sergey Shamba and 20% to Raul Kajimba. These are the final results, which include the votes of Abkhazians who voted abroad, that is to say in Moscow and in Karachaevo-Circassia. The Central Election Committee made public the final results less than 24 hours after the end of the election process. While few would have bet on the success of Khajimba, many would have had on Shamba. Khajimba was unsuccessful in Presidential Elections 2004 as well, while Shamba gained consensus as Minister of Foreign Affairs. As such, he became known and – within the limits of the illegitimacy of his position – somehow popular among representatives of the international community, for his moderation and openness to many interlocutors. Electoral outputs seem to reflect a sort of disappointment for his grey performance as Prime Minister, a position he covers from February 2010.

The vote puts an end to an electoral campaign which was assessed as competitive and fair, in line with the commitments the candidates agreed on at the end of July, upon the initiative of Khajimba. Still, on the day of the elections, in Sukhumi a certain number of speznas were deployed, as a preventive measure. A couple of episodes unveiled what lies under the surface of fairness and order, rising up the less reassuring face of the “Republic”. Some supporters of Shamba organized an outdoor screening of a video interview with Tengiz Kitovani, in which Ankvab was accused to be a traitor who spied on behalf of Georgia militias during the 1992-1994 war. The episode was followed by a close-door meeting which had the scope to prevent political confrontation from escalating, like it had happened in 2004, when Presidential results were close to cause an inner conflict. During the election campaign, a car accident occurred to Shamba, and some cast a shadow on this episode as well.

What is to be expected by the new President?

Who is Alexander Ankvab, and what can be expected from the newly elected Abkhaz President? The episodes occurred during the election campaign recall the painful memories of a war whose effects - as the new President said speaking of "the German order and billions of roubles" - are every day under the eyes of citizens. As for the "accidents" in which politicians are involved in Abkhazia, Ankvab himself was the target of several assassination attempts. The last was recorded in September 2010. Many problems to face, 58,657 electors who cast their vote for him not to disappoint, 22,456 (for Shamba) + 21,177 (for Khajimba) whose hearts and minds must be conquered, and the psychological inheritance of the President of Independence to be compared to, for a politician who was elected on the very day of the anniversary of the first recognition of the State by Russia, in 2008. In this context the political experience and the personality of Ankvab will emerge. He began his career in the Soviet institutions and in “independent” Abkhazia served as Prime Minister and vice President. Ankvab so far played the card of his firmness. Speaking about one of the hot topics of debate in Abkhazia, the ownership and sale of real estates to “foreign citizens”, an expression which usually stays for Russian buyers, he said: "[... ] a decision should be taken courageously, firmly and absolutely on the basis of what is necessary to the country. In a regime of relevant restrictions for potential buyers, but in a position of absolute equality with citizens of Abkhazia, I think there can be no harm to the State, but the benefit to revive the economic life of the country." Just his positions on sales to the Russians, it is said, were behind the attack of September.

13:10, the 27th of August: the data circulating on the election results are yet to be declared official by the Central Electoral Committee. Nevertheless, the Russian President Dmitry Medvedev already phones to congratulate the winner. At 19:20 the Abkhaz news agency publishes the Russian letter of compliments in which Medvedev reiterates that "as before, you can rely on in depth and comprehensive support of the Russian Federation ". Having worked on important assignments in domestic policy, Ankvab knows and interacts closely with the Russian presence in the area. A comparison can be drawn on this issue with Shamba’s background, as the latter had the chance to meet more frequently with third actors. Nevertheless Ankvab was not the "candidate of Moscow”. The Kremlin kept a low profile during the election campaign, knowing that none of the candidates puts into question Abkhaz-Russian strategic partnership. But Medvedev's reaction is a sign that the result is welcome. There are several open issues between Moscow and Sukhumi, potential sources of concern: the exploitation of offshore oil resources, the question of investments and the real estate question. Ankvab is expected to be not necessarily an obedient interlocutor, but a reliable one. On the other hand, in a political landscape where some competition prevails, having to keep an eye open to their constituencies, no candidate would probably be prone to be just an executor of Russian interests.

On the other hand, Tbilisi…

There's no recognition of the institutional role of Ankvab by the international community and by Tbilisi, where elections in Abkhazia are obviously considered illegitimate. It is interesting, on the other hand, to give the floor to the newly-elected President on his relationship with the State of Georgia and on the negotiations, as he himself described them in the above mentioned interview: "I will not tie our relations with Georgia to the fact that Mikhail Saakashvili may or may not step down from Presidency. What is important is the policy that the State will express. We are even now ready to sign with Georgia a peace, a non use of force agreement. This is our main task, to live in peace, in a good neighborhood. We don’t have aggressive plans and we are committed to somehow ensure a safe and normal life to our citizens, first of all to those who live in the border district of Gali [...] What contacts do we have with Georgia? Our team has just returned from the Geneva session, and I'm not here to say that we have moved in some direction, but there is a dialogue. Geneva is important for us, because it is the square from which we turn to the outside world. It might be an ineffective way out, but it's a place where we can express our opinions."