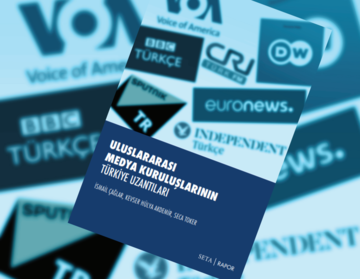 OBC Transeuropa and 20 other human rights and freedom of expression organisations condemn a Turkish pro-government think-tank’s report  that accuses leading international media of being biased against the government and singles out their correspondents for attack. The organisations regard the report as a dangerous escalation in the harassment of journalists.

Published on 5 July by the Foundation for Political, Economic and Social Research (SETA), a think-tank created by İbrahim Kalın, who is nowadays an adviser to President Erdoğan, the report is billed as an academic study of the news coverage of the Turkish-language services of seven leading international media outlets, including the BBC, Deutsche Welle, Voice of America, Sputnik and Euronews.

In reality, it consists of a blistering attack on all of these media outlets except China Radio International, the only one not accused of anti-government bias on the basis of a comparison of their coverage of the July 2016 coup attempt, Turkey’s military intervention in Syria and other recent developments with the official Turkish version of these events.

The report names the correspondents of these media outlets, details their professional history and traces what they have said and done on social networks, in an attempt to establish their political affinities, question their journalistic ethics and even suggest links with terrorist organizations. Covering the trials of journalists and sharing the tweets of RSF and such media outlets as Cumhuriyet and Evrensel are cited as evidence of “anti-government positions.”

OBCT and the other organisations listed below deplore the report’s malicious use of the political files that have been kept on the targeted journalists, using crude assumptions, with the sole aim of intimidating them. Such a witch-hunt is especially dangerous in the tension and political polarization that currently characterize Turkish society.
It is also hard not to see the report as an attempt to discredit these international media at a time when several of them are stepping up stepping up their Turkish-language reporting, in order to compensate for the destruction of media pluralism that has been orchestrated by the Turkish authorities.

The Journalists Union of Turkey  (TGS), Turkey's Media and Law Studies Association  (MLSA) and the journalist

" title="Link a Fatih Polat" >Fatih Polat , announced on 8 July that they filed a legal complaint against SETA on several grounds including “inciting hatred and hostility” and "retaining personal data." In response to all the criticism of the report, SETA has insisted  that it is “scientific.”

As the rule of law is steadily dismantled in Turkey, the situation of its media has become critical, especially since the 2016 coup attempt. Ranked 157th out of 180 countries in RSF’s 2019 World Press Freedom Index, Turkey now holds the world record for the number of journalists in prison.