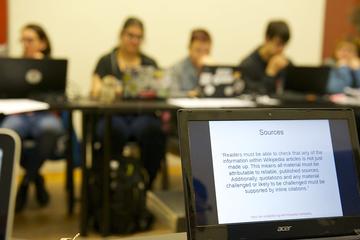 A memorandum of understanding with Wikimedia Italia marks the fourth year of the collaboration between OBCT and the Wikipedia movement: a review of the Wiki4MediaFreedom initiative

It has been four years since OBCT launched Wiki4MediaFreedom, an initiative aimed at organising, expanding, and updating Wikipedia entries related to freedom of information and expression and threatened journalism in Europe.

Created within the framework of the European Centre for Press and Media Freedom project, a network involving several European media outlets, the alliance with Wikipedia meant to transfer to the largest existing free encyclopedia and the fifth most visited site in the world the knowledge that OBCT produces and disseminates every day on issues that are central to European democracy, bringing them to the attention of the wider public. Wiki4MediaFreedom is a component of a larger content curation work hosted on the Media Freedom Resource Centre , a platform that systematises, archives, and disseminates up-to-date content on press freedom in Europe, including practical tools for journalists and many other resources.

Over these years, initially supported by a Wikipedian in Residence, we have created and improved hundreds of quality articles on press freedom in Europe. Using authoritative sources and reports from the main organisations that monitor the state of media freedom in Europe and the world, we have reconstructed the overall picture of media systems in dozens of countries in South Eastern Europe, the Visegrad countries, but also Russia and Turkey, illustrating the transformations underway, the level of pluralism, the conditions of journalists, and the main critical aspects of the sector.

We then focused on four specific issues crucial to understanding the evolution and problems of the media in the enlarged Europe: access to public information, transparency and concentration of media ownership, censorship and self-censorship. If these entries became a book, it would be a volume of over 400 pages!

But that is not all. Wiki4MediaFreedom has also taken offline shape in events around Europe: we organised four writing marathons in Belgrade, Sofia, Madrid, and Berlin, involving dozens of journalists, activists, and expert Wikipedians who worked side by side to draft new entries in different languages ​​(Italian, English, Serbian, Spanish, German).

For example, during the edit-a-thon in Madrid on January 18th, a biographical entry was created in Spanish on Novaja Gazeta journalist  Anastasia Babúrova, who had died exactly ten years earlier in Moscow at the hands of a killer, together with activist Stanislav Markelov. Last January 26th in Berlin, to commemorate the anniversary of the death of Italian journalists Dario D'Angelo, Alessandro Ota, and Marco Luchetta – killed in Mostar on January 28th, 1994 during the war in Bosnia – participants created Italian-language entries on D’Angelo  and Ota . These temporal coincidences have made us reflect on the fact that every day is the right day to remember the crimes committed against journalists, often with impunity.

To encourage the creation of content in other European languages, we also launched two online translation contests: dozens of new entries have since been created in Serbo-Croatian, Italian, and English. For example, during the first edition new entries were created in Croatian on Daphne Caruana Galizia and the death of Jan Kuciak .

During the edit-a-thon and the contests there were debates, sources were verified, data and facts were updated, we talked about how access to public information works in the various countries. Serbian participants discovered the stories of brave Italian journalists, and vice versa; we reflected on the similar situations that exist in different countries, on how important it is to mobilise all together and make the debate on pluralism and media freedom a European debate.

Since knowledge is power, through our work on Wikipedia we have mobilised the attention of public opinion on particular cases, fostering activism from below in support of free and independent journalism. For example, on the day of her birthday, we invited the Wiki community to translate into different languages ​​the biographical entry on Azeri investigative journalist Khadija Ismayilova, who was under house arrest. We also participated in the campaign against the blocking of Wikipedia in Turkey encouraging the translation of the related entry into languages ​​other than English.

The project cycle including Wiki4MediaFreedom ended on January 31st, 2019. To keep the attention on the topic high and involve other actors in this process, OBCT signed a cooperation agreement with Wikimedia Italia , the Italian chapter of the Wikimedia Foundation – the organisation that maintains the Wiki project servers and supports the global movement strategy. The first concrete step of this collaboration is the activation of a work-experience project that will involve, starting from the beginning of February, two students of the Racchetti-Da Vinci high school in Crema, who will work on the translation of some of the entries drafted in the context of Wiki4MediaFreedom.

Thanks to Wikipedia, the contents we created in the last few years will remain alive: uploaded with a free license, the entries belong to everyone. As long as Wikipedia exists, they will be reused, enriched, improved, updated, and translated into many other languages.