Serbia, fighting for the environment in fragile areas 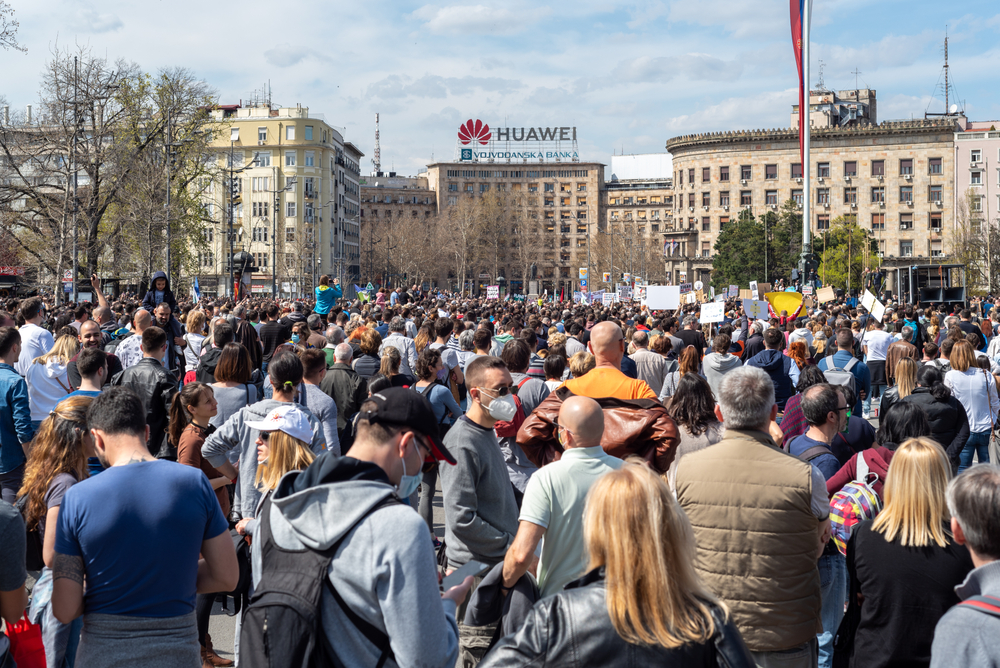 Demonstration for the environment in Serbia © Mirko Kuzmanovic/Shutterstock

Environmental battles in peripheral areas in Serbia are little known and little studied. Activists and citizens encounter many difficulties in mobilising. Interview with social researchers Jelisaveta Petrovic and Jelena Pesic from the University of Belgrade

The environmental battles over the use and exploitation of natural resources have only recently spread to Serbia. Those that take place in peripheral and marginal areas far from urban centres, in particular, are still little studied. In these areas, the citizens who mobilise – often directly affected by the problems caused by environmental exploitation – have fewer resources and chances to make their struggles visible and attract the attention and support of the public and the media. We interviewed Jelisaveta Petrovic and Jelena Pesic, researchers at the Department of Sociology, Faculty of Philosophy of the University of Belgrade, who are studying two cases of ecological battles in peripheral areas in Serbia: the battle against the construction of mini hydroelectric plants in south-eastern Serbia led by the movement “Let's defend the rivers of Stara Planina ” and the most recent protests against a controversial mining project of the British-Australian company Rio Tinto in western Serbia.

Your research will investigate the conflicts on the use of natural resources in two fragile areas of Serbia. What are the reasons behind this choice? Do these struggles have peculiarities that differentiate them from the Urban Movements?

Urban struggles and movements in Serbia gained importance after the year 2000. A special impetus to the development of these movements was given by the privatisation of former state-owned companies and investor urbanism processes (a set of practices aimed at placing the interests of investors as the main criterion in defining urban development policies, ed.), leading to usurpation of public urban spaces and their commercialisation. These initiatives have been well researched and elaborated in academic literature over the past few years, with several studies being published. On the other hand, struggles over natural resources are a newer phenomenon. They emerged as a reaction to the exploitation of natural resources, mostly as part of the foreign investments after the Great Recession. The recent policy of Serbia’s government of attracting foreign investments and raising the employment level largely relies on offering benefits to foreign companies, such as exploitation of cheap labour, but also exploitation of natural resources. Since these initiatives are a relatively new and under-researched phenomenon, we decided to focus our research on their specificities.

What is particularly interesting is that, unlike urban struggles that were mostly initiated by highly educated residents of large cities, who had resources and political experience to engage in contestation of urban policies, environmental struggles included people from rural areas, directly affected by the exploitation of natural resources. Sometimes, these were people who were lacking adequate material or organisational resources or political experience to engage in such struggles. For this reason, we are particularly interested in exploring how these grassroots initiatives by the marginalised population manage to gain mass support, how they organise, what resources they rely on in building networks that increase their visibility, etc. In other words, what their role is in building a broader social movement that focuses on environmental protection which is unfolding before our eyes.

The European Union – with its apparatus of rules, policies, and funding lines – appears distant from such movements located in marginalised areas. How is the EU perceived by local actors? Which role can it have in relation to the outcome of the protests?

The role of the EU in environmental struggles in Serbia is contradictory. On the one hand, the adoption of European regulations related to ecology and environmental protection is part of the process of negotiations for Serbia's accession to the EU. In particular, Chapter 27 (Environment and Climate Change) refers to the harmonisation of national regulations with European acquis. On the other hand, the European Green Deal and the resulting demands for clean and renewable energy sources to reduce global warming are producing contradictory effects – the exploitation of lithium needed for batteries for electric cars or the construction of mini hydropower plants as a renewable energy source inflict devastation on the natural environment and local ecosystems. Therefore, one of the aims of our research is to explore the extent to which local actors perceive the EU institutions as a place to address their demands and complaints in the event that national authorities are deaf to their problems.

The European framework is also linked to the opportunities for the transnationalisation of struggles. Looking at the environmental field, an important example comes from the “Save the blue heart of Europe” campaign. Do similar initiatives exist?

“Save the blue heart of Europe” is one of the first initiatives in regional networking and cooperation that aimed to gather activists, NGOs, local populations, and so on, opposing to damming the pristine rivers on the Balkan peninsula by building hydropower plants. Another example is the online portal “Balkan green energy news ” that features news and stories on sustainable energy, climate actions, environmental protection, etc. from the Balkan region countries. This initiative is not aimed, however, primarily at supporting local activists in preserving natural resources, but rather at informing investors and other relevant stakeholders on changes in environmental law in order to expand the regional green energy markets.

Within your research a specific focus will be devoted to the role of social media in voicing and broadening the support for the mobilisations. Social media themselves, however, are also used in order to discredit the movement, with hate campaigns  that often threaten the life of environmental activists.

Environmental issues in Serbia have not thus far received strong public visibility or mass support. Social media can contribute to the visibility of environmental problems, which was exactly what happened with the excessive air pollution in Serbia. They are especially important when it comes to local and grassroots initiatives that do not have adequate resources to promote their environmental agenda through institutional channels. Around social networks, a community is forming of environmentally aware citizens who draw attention to the importance of environmental issues, but also organise offline protests. Social media contributed to raise wider public support for the protests against the mini hydropower plants, leading civic organisations and citizens to join the protests that took place in southern Serbia, in hard-to-reach rural areas. On the other hand, it is precisely this visibility of environmental activists on social networks that can result in exposure to attacks by the tabloid media, including actual threats that can be very serious.

How is the Serbian government dealing with environmental issues? Did the “Ecological revolt” of April 10th, 2021 open spaces for dialogue with civil society?

The attitude of government officials towards environmental issues varies depending on the seriousness of the problem itself and whether it is caused by significant domestic or foreign investment. While small environmental problems (such as clearing a local landfill) are often solved under citizen pressure, this is not the case with environmental problems that are the result of large investment ventures. For example, the unfavourable environmental consequences of the “Belgrade Waterfront” project were not addressed by the authorities, despite the concerns raised by environmental activists and experts. The situation is similar with Chinese investments (Zijin Copper in Bor or Linglong Tire in Zrenjanin) as well as with the most recent Rio Tinto mining plans. Recent protests have made environmental issues more important in the public discourse, but it should not be concluded that this has opened a dialogue on this topic between government representatives and civil society. Environmental issues are useful for mass mobilization and as such are often exploited in anti-regime protests. As the environmental agenda is perceived as politically neutral, it often passes under the radar and can unite people of different political orientations. However, it has rarely been a goal in itself, but rather used as a “green veil” to hide direct criticism of the regime. Environmental concerns are currently being used by opposition parties to extend the mobilisation, but there is a danger that they will be dropped if they are not successful in launching massive protests against the ruling regime.

In conclusion, an important political message came from Croatia in these last few weeks, with the exploit of the environmental Left of “Mozemo” at the administrative elections. The members of the coalition, foremost Tomislav Tomasevic, the new mayor of Zagreb, come from the field of Croatian activism, with 20 years of experience in environmental and urban struggles. According to you, which are the success factors? Is there a chance to see similar scenarios in the region, perhaps at the next year’s administrative elections in Serbia with the local movement “Ne Da(vi)mo Beograd” running in Belgrade?

The success of the eco-left, gathered around the “Mozemo” platform, should certainly be understood (and many actors seem to see this) as a kind of signpost on how to build a political platform that successfully combines urban and environmental issues and social justice issues in Serbia. The people gathered around “Mozemo” have slowly and patiently built a network of supporters, starting with local issues at the centre of the municipal elections. The success of this platform is a combination of fighting for local, urban, and environmental problems that affect all residents, the fight against corruption, demands for social justice, and the fact that political parties in charge for many years have lost the trust of a large number of voters. Certainly, the role that favourable political opportunities played in the success of this initiative should not be underestimated. There are similar initiatives in Serbia, such as “Let's Not Drown Belgrade”, and their development is partially influenced by platforms such as “Mozemo” and similar initiatives from other European countries. However, the political circumstances are different, and it is quite certain that we will have to wait in order to see significant successes of this or similar initiatives in Serbia.