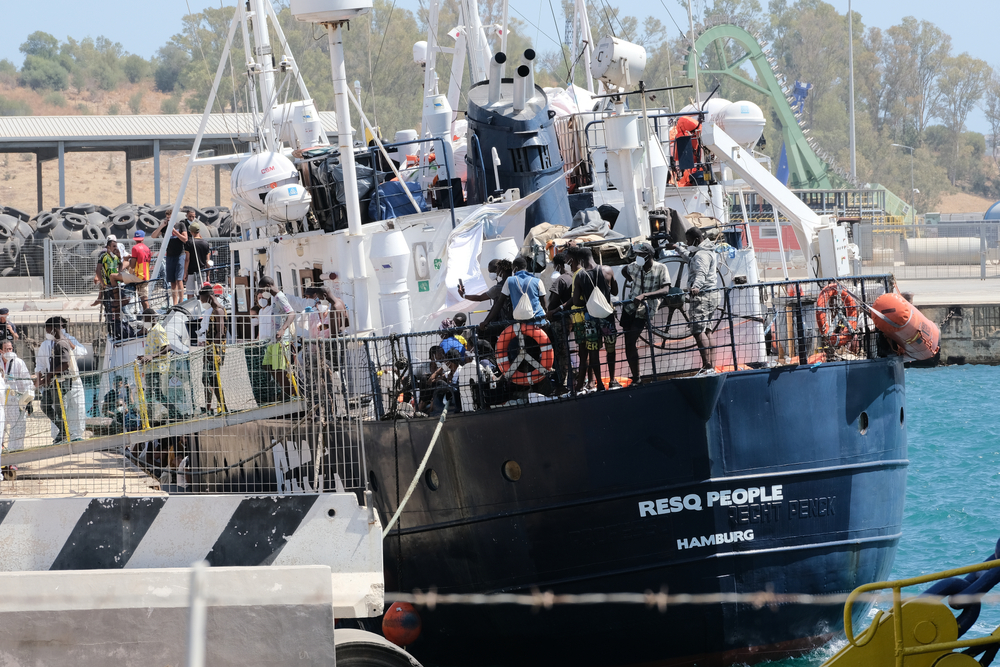 The EU approach to migration is based on strongly government-centred, restrictive policies, impervious to the external motions of grassroots actors. Yet, there might still be room for a systemic change from below

(This text was originally published  in the blog Border Criminologies)

A few months ago, the Court of Palermo ordered the former Minister of Interior, Matteo Salvini, to stand trial for the 2019 Open Arms incident , when he decided to block the disembarkation of migrant people from the ship of the Spain-based civil society organisation (CSO) Proactiva Open Arms. This judicial proceeding follows the charges pressed by the Spanish CSO. The cities of Palermo and Barcelona, as well as several associations and organisations, were also admitted as civil parties to the criminal proceeding.

Last January, in another Italian court, in Rome, the pushback of a Pakistani man to Slovenia was declared illegal, as a violation of his right to apply for asylum and have his claim processed by Italian authorities. This was the result of the motion filed by the Italy-based non-profit Association for Juridical Studies on Immigration (ASGI), on behalf of the concerned person.

Besides the direct consequences for the people involved, who have been looking for justice in a court of law, these two cases are important examples of potential ways to influence migration policies through the judicial field – insofar as they can have long-term repercussions on the legitimacy of policies of closing harbour s and informal pushbacks , respectively.

Federico Alagna (PhD Radboud University & University of Bologna) is a post-doctoral researcher at Scuola Normale Superiore. His main research interests relate to EU and Italian migration policies, with a particular focus on bottom-up processes and on the role played by civil society actors in policy-making.

In fact, strategic litigation has become an interesting tool to widen the scope of judicial cases in the context of migration governance, with a view to declaring some specific policies and/or practices unlawful. Among them, the submission to the International Criminal Court against the EU, Italy, Germany and France; the complaint against Italy, Malta and Libya with the UN Human Rights Committee and various administrative proceedings in Italy. One of the latter, presented by Sea-Watch, led to the (only provisional) release of a vessel, after a six-month blockade, and was meanwhile referred to the Court of Justice of the European Union. ASGI also launched a project aimed at promoting strategic litigation.

These initiatives interestingly are poles apart from the far more renowned instances of judicial measures related to the criminalisation of humanitarian practices and solidarity. These are still very relevant and widespread (as the Sicilian wiretapping case shows ), albeit allegations have not even led to an indictment so far.

Other jurisdictional cases over the last few years have gone in the same strategic direction.

Examples from the EU and its member states are numerous and made it possible to help stop practices that are in clear violation of international and human rights law. This underlines the importance of the judicial field in order to influence governmental policies and practices for two, connected reasons.

Continuity and Executivisation of Policies

Firstly, the strong continuity of migration policies across the political spectrum , which makes a policy change extremely unlikely on the mere basis of a government or political majority change. The structure of EU migration politics explains continuity in policies, albeit some minor substantive differences exist and political communication may, at times, diverge – also in a strategic way, such as in the case of the anti-smuggling rhetoric .

Continuity is grounded in the Schengen approach, which as early as 1990 lay down harsher border control and migration policy measures and made them systemic. Today’s migration policies in the EU come straight from there, and path dependency dynamics connected with the policy framework developed before the Lisbon Treaty (2009) have heavily contributed to their persistence. In recent times, the New Pact on Migration and Asylum – presented as deeply innovative by president von der Leyen – has soon started to attract heavy criticism for its failure to shift towards a more open approach to migration.

Policy change appears then possible only if enacted by the external intervention of actors who are officially not decision-makers. This element brings us to the second issue: the inaccessibility of the legislative process to CSOs and social movements.

Policy-making strongly lies in the hands of executive bodies , who tend to make growing use of heterodox and controversial policy tools (such as in the case of the EU-Turkey statement ), marginalising parliaments and trying to avoid judicial scrutiny . Governments and governmental bodies are able to shape policy outputs limiting the public oversight, adopting smokescreen strategies and deliberately ignoring evidence , when this is deemed preferable. It comes as no surprise, then, how limited civil society’s achievements have been so far.

Advocacy is probably the clearest example of such limited achievements. Over the years, CSOs, activists and non-state actors more broadly have been involved in dialogues, consultations, lobbying and other activities aimed at influencing the policy process in the migration domain. Yet, mostly with a very limited impact and without any promising perspective, such as in the cases of search and rescue in the Mediterranean Sea, the Balkan Route and Greek camps.

The use of strategic litigation as a way to intervene on the (re-)definition and implementation of migration policies is relevant and might eventually be an important game changer.

Going even further, at least two other avenues can also be explored, in this perspective.

Direct actions on the ground, for instance, have become an input for questioning existing policies and practices, as the case has been with search and rescue activities in the Mediterranean Sea and their re-politicisation . Moving from that, a critical reflection on the conditions that can make these actions meaningful also with a view to directly influencing policy-making would be important – bearing in mind, however, that their primary objective clearly is to save lives.

Lastly, in a policy area where progressive actors seem to be mostly non-influential in terms of policy outputs – because either they are not part of government coalitions or are not able to drive the policy process – another issue needs further attention. Namely, whether and how establishing a policy-oriented coalition of ‘marginalised’ state and non-state actors can be fruitful, which forms this should take, how this could work and on which substantive issues. In so doing, further attention can be given to the situation of migration politics at the city level, where policy-makers increasingly commit to challenge EU and national restrictive frameworks. Including local institutions in this reasoning towards a policy-oriented coalition could further strengthen the process. The project From the sea to the city can be regarded as a first attempt in this direction.

Thoughts for a Systemic Change

A systemic reflection for the elaboration of strategies to intervene in the policy process, contributing to a structural reshaping of the EU migration governance, is a process that involves activists, researchers, journalists, politicians and beyond – in their different capacities and with a shared responsibility. After thirty years of restrictive migration and border policies, it is more than ever crucial to critically reflect on effective ways to (ideally) demolish, or (more realistically) change, a decision-making process, which has so far proven impervious to external motions – securing policies and securitising Europe.

Strategic litigation, advocacy, direct actions on the ground and policy-oriented coalitions are all potential avenues which can represent a starting point for the promotion of bottom-up migration policies. At this moment, they need to be critically assessed, enriched, tested, integrated and – if necessary – eventually overcome.

Federico Alagna (PhD Radboud University & University of Bologna) is a post-doctoral researcher at Scuola Normale Superiore. His main research interests relate to EU and Italian migration policies, with a particular focus on bottom-up processes and on the role played by civil society actors in policy-making.