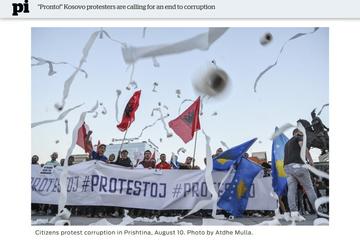 An investigation by the Prishtina-based website Insajderi.com has lead to the resignation of Adem Grabovci, chief of Kosovo’s ruling parliamentary group

Adem Grabovci, the chief in Parliament of the ruling Democratic Party of Kosovo (PDK), has resigned on August 16th in the midst of a wave of protests in the streets of the capital, Prishtina. Activists are demanding the resignation of all implicated with Grabovci in an alleged corruption scheme the Prishtina-based website Insajderi.com  has uncovered.

The online portal Balkan Insight, which has been following the story closely since it broke earlier this month, reports  that Grabovci announced his resignation to local media on 16 August: "In order to maintain my moral and political responsibility in such matters, and the possibility of an adequate legal treatment in this case, I offer my resignation as the chief of the PDK Parliamentary Group."

Balkan Insight recounts that on 1 August, the online newspaper Insajderi.com publicly released “six wiretapped phone conversations between Kosovo President Hashim Thaci and Grabovci [suggesting] that the two men arranged favoritism for public sector jobs and agreed on pressuring members of parliament into adopting two laws.” The tapes the online newspaper obtained were reportedly  made in late 2011, when the EU Kosovo mission EULEX was investigating Grabovci for corruption.

Other PDK officials  are also alleged to have been caught in the recordings, which Insajderi.com has gradually been releasing, claiming it has thousands of clips. The released recordings have been under assessment by EULEX, the results of which could lead to the formation of a team of state prosecutors to further investigate the case, according to Balkan Insight .

The scandal has been labelled by Kosovar media as “Pronto Affair 2”  after the original “Pronto Affair” – which initially exposed the contents of PDK members’ alleged wiretapped phone conversations two years ago. It has riled civil society in Kosovo into organising several protests this month invoking the hashtag #PROTESTOJ , with one of them involving throwing toilet paper symbolically on government property.

The case represents progress on the media freedom front in Kosovo, which scores 49 out of 100 in Freedom House’s index . Defamation is considered a civil offense in the Balkan country, with offenders being subject to fines. The burden of proof falls on the defendants in such cases, media laws are only inconsistently implemented, and “both the police and the judiciary lack experience and training in addressing threats against the media,” the index says.

"While Kosovo’s constitution and legal framework provide for freedom of expression and of the press, the media environment is affected by political interference, financial pressure, and a high degree of ownership concentration.”

With the opening for Albanian-language media after the Kosovo War  in the 1990s, “the media market has grown and diversified,” despite obstacles due to the influence of political and business groups, says the organisation Balkanmedia . The past several years have seen the growth of local independent online media such as Insajderi.com and Kosovo 2.0 .

An article Kosovo 2.0 published  on 17 August speaks out on “Pronto Affair 2.” The writers call Grabovci’s resignation “the bare minimum required for salvaging Kosovo’s political integrity. But it should not serve to mask the deepest political and social problems being graphically exposed by the current wiretapping revelations. All of Kosovo’s worst political and social traits, often kept just below the surface behind a thinly veiled veneer, are now being brought to the surface; the facade shattered.”

ECPMF will continue following the “Pronto 2” story as it develops.