In the Heart of Europe 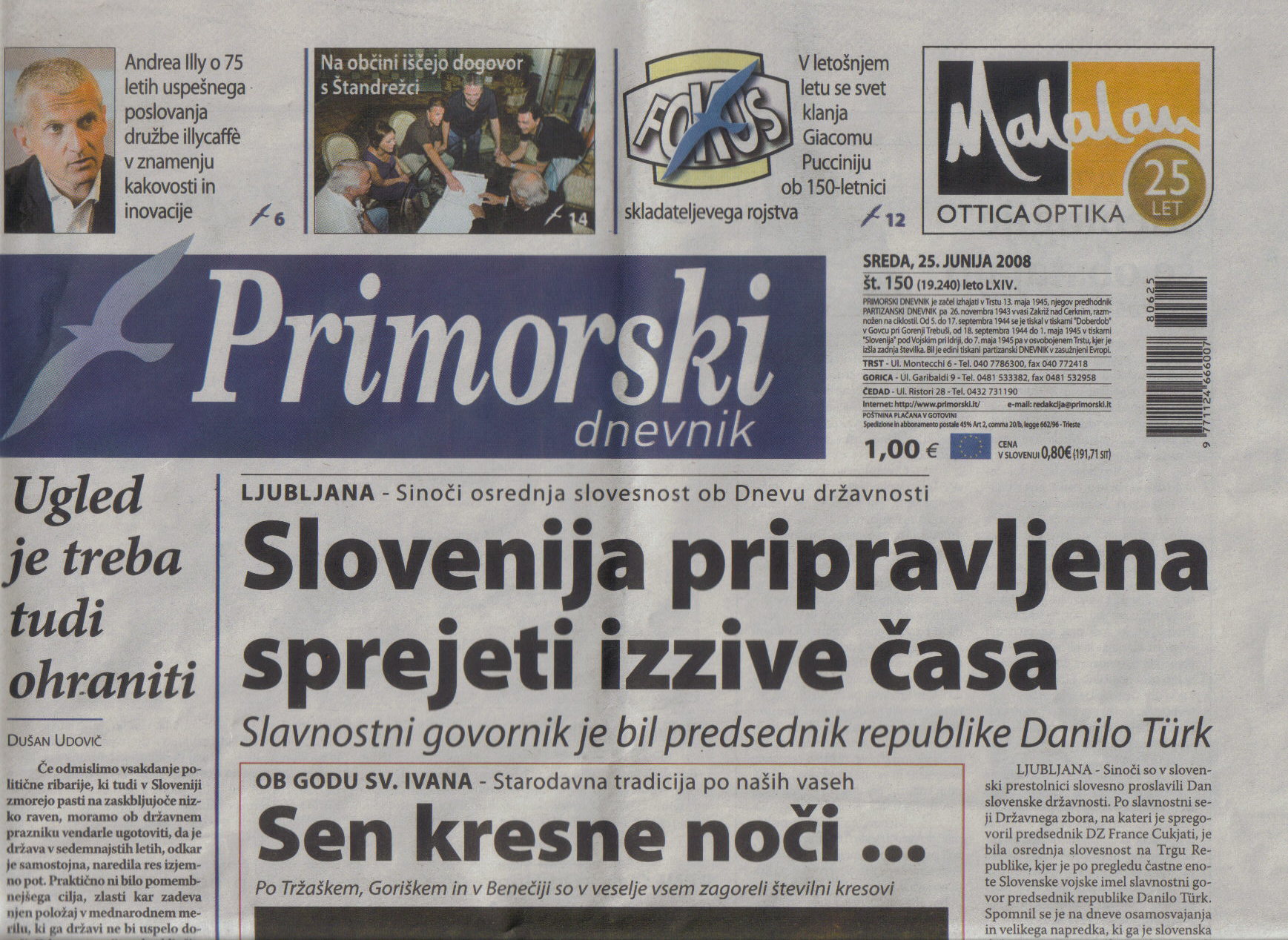 It is the daily of the Slovene minority in Italy. For years, it has been the paper "of the border". Now it is in the heart of new Europe and it covers a rapidly changing world. Its story is told by one of its reporters. An interview with Breda Pahor

Could you briefly describe your paper?

This daily has the format of national dailies in that it covers both international and local news, although it particularly covers the issues of concern to the Slovene minority in Italy. I could say that we have been an expression of what was once called the Alpe-Adria community and it is today the enlarged European Union. If previously we were "at the border", we are now in the middle of this new Europe. This is how we want to position ourselves and program our work; nevertheless remaining, as I said earlier, a daily of the Slovene minority. We are the only Slovenian language daily in Italy.

Have you managed, from your point of view, to anticipate in some way the changes taking place with Slovenia's integration into the EU?

In some ways, yes. Quite earlier, before Slovenia's entry into the EU, we created on our pages, a section on the entire Gorizia area that includes Gorizia with a compact Slovene minority, as well as Nova Gorica. In this way, we sought to promote in the area the mind-frame existing before the 1947 division.

What regional changes are occurring because of the current Schengen era of free communication between Slovenia and Italy?

In our work, we have always had many cross-border contacts. Of course, now we no longer cover the unknown. Even during the cold war years, this was the most open border in Europe. There was movement of people and information... However, the end of the physical barrier is definitely an important fact. Everything is becoming more normal. Recently, I felt good when walking towards Miramare. I met many Slovenes who had come to Trieste not for shopping but just to have a nice walk by the sea. I know people who go to the cinema or the theatre on one or the other side of the border. This becomes increasingly common.

In recent years, here in the municipality of Trieste, Italian families increasingly decide to enrol their children in Slovenian-speaking schools or kindergartens. Will this ease the emergence of an effective multilingualism in the city?

For quite some time now, the Slovene schools are not just the schools of Slovenes. There are many mixed marriages and we can confirm that of the children attending these schools only a tiny minority has two Slovene parents. This is a natural, very normal fact. Nevertheless, Italian families, often those living in the small communities next to Trieste, also enrol their children, for example, in a Slovenian-speaking kindergarten, only to later put them in Italian schools. They clearly recognise the need to teach Slovenian to children who do not have a good command of the language. However, this issue not only concerns Slovene schools; the entire Italian public education system should consider this policy because of the high number of migrant children in the schools.

Our entire society is changing rapidly. The school is no longer a place of a single culture or language. Teachers should know that they work with children coming from different cultures, other linguistic, cultural, and religious contexts; this makes work much more complex.

In regards to multilingualism, I have always been astounded - as a person, not as a member of the Slovene minority - by the Italian community's lack of interest in Slovene culture. Naturally, I understand that the language can seem a bit difficult; but still, I have always expected there should be some curiosity. Things are changing now; the affirmation of Slovenia as a country has brought visibility and some interest for Slovenia, its language, and its culture.

Given all this, is it difficult to run a daily in Slovenian in Trieste? Does the city perceive it as richness? Or, is the city dominated by the right-left confrontation, as non-residents often describe Trieste?

Trieste is one of those cities where the right-left division, if there can still be talk of such a division in Italy, remains stark. Furthermore, the Trieste rightwing has always directed its hostility towards the Slavs. In addition, we are the Slavs. Nevertheless, we have always been here. The Slovene minority is the largest autochthonous minority community in Trieste. As we often say: borders and countries moved, we have always been here, we have stayed here, and this is where we want to live.

On the other hand, however, it should be said that as a paper, or as journalists, we have contacts with everyone. We are present in all the bodies, the city, institutions, parties; our colleagues recognize our work, and we have a normal rapport with them. Nevertheless, I do not feel like saying that Trieste perceives us an integral part of the city; perhaps it does no longer see us as threat, however not everyone recognizes us as equal citizens in every right.

Then, it happens that when the debate heats up - as, for example, on the issue of the foibe massacres, the exodus - blame is not assigned to those who have caused them, but some always point at the Slovene community in Trieste. The Slovene community in Italy has nothing to do with the exodus. Furthermore, the arrival of the refugees in Trieste has had a strong negative effect on the Slovene community because the Slovenes and the refugees were pitted against each other. It seems that these issues are still driven more by sentiments than by reason; reactions are emotional rather than supported by argument. Trieste should overcome these anxious issues as a whole, take distance from the past and look into the future; the conditions are in place, however...

These years are obviously years of opportunity for this region...

However, the feeling is that we do not really take advantage of this. One example is the attempt to connect the ports of Trieste and Koper. It turns out it is difficult to think constructively and to accept that the only way to succeed is to think of ourselves as one integral territory: without much fear.