Beyond the Divided City (III) 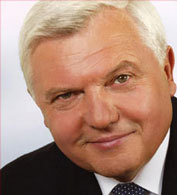 Read the and the Gorizia - Nova Gorica
The ultimate fall of the border definitely represents a great opportunity for the Gorizia region and the two cities, Gorizia and Nova Gorica. For a long time, they were separated by a border that many defined as unnatural. These three articles on the border region shed some light on some positive aspects and specific projects concerning cross-border cooperation and the collaboration between the two cities, but also on difficulties and waning of the idealism that had previously characterized the "Gorizia" debate.
We talked with the mayor of Nova Gorica, Mr. Mirko Brulc, in order to understand how this new borderless reality is seen by the person who, during his mandate, first saw the accession of Slovenia into the European Union, and, more recently, its entry into the Schengen Agreement. Brulc, elected for the first time in December 2002 and re-elected in November 2006, gave us this interview.
On the night of December 21 2007 the border between Italy and Slovenia and respectively Gorizia and Nova Gorica finally disappeared. In your view, what is the significance of this event and how does it affect the life of the city?
The ultimate fall of the border was an extremely important event and for us the entry into the Schengen is the real entry into the European Union. The events from the previous years have also been important, but only now do we really feel like European citizens, and indeed this moment was celebrated with great emotion. People celebrated with tears in their eyes. They now really feel as though they live in a common place. This changes everyday life a lot. It feels like belonging to a city that can finally be seen as one.

The following small example demonstrates how the disappearance of the border has changed people's lives, even concerning little things: Nova Gorica at this time has traffic problems because of street works. Some people travel via Gorizia in order to arrive at the centre of Nova Gorica.

Things have also changed when it comes to leisure: more and more Italians come to Nova Gorica just to have a walk or a cup of coffee. Events in Nova Gorica have recently been attended by many Italians, such as the Rose Festival (Festa delle Rose), the New Year celebration, or sport events. Economic and commercial exchange has been liberalised for some time, but now there is a very different perception of living by the border. For the first time this year, for example, a group of pupils from a school in Brescia also visited Nova Gorica during their school trip.
We know that that you have projects (past and current) of cooperation with Gorizia. What are the priorities for the municipality of Nova Gorica?
We are making great efforts to maintain collaboration with Gorizia. The simplest and most direct cooperation concerns tourism. As I was saying, organising big events, such as sporting events, always considers that the two cities share a common space; for example, the big basketball tournament filled hotels in both cities.

Cooperation with environment and infrastructure is also very important. Obviously, the two cities have to think and act as one on air-pollution issues. Similarly, infrastructure can have an impact on the overall accessibility of the area. For example, the western ring road around Nova Gorica goes all the way to the Italian border.

Concerning investment in the border area, one must maintain a high level of coordination and information sharing, because Slovenian entrepreneurs clearly count on Italian clients and vice versa. Beyond bigger profits, clearly, the local population is ultimately a common one and thus needs a strategy for common development.
Some observations and some recent interviews have indicated a certain "slowdown" in cooperation and difficulties in the functioning of some coordination bodies and instruments, such as for example the Protocol of Cooperation. Would you agree with these impressions?
I do not think that the cooperation is in crisis; however, some differences of opinion should be harmonised. For example, I think the cooperation between the Chamber of Commerce and the Economic Chamber is going on very well and that it covers much bigger territory than just Gorizia. In this way, it expands both our activity and visibility. However, a big difference exists between the Italian model based on small businesses and the Slovenian one dominated by big stores and trade centres. In addition, those who feared an invasion of Slovenian labour in Italy were very wrong, although there is a general increase of workers coming from the Balkans.

Another challenge to cooperation is the frequent changes in the general framework, such as after local elections, which requires continuous adaptation to the new circumstance. For example, until now, we based our cooperation under the Protocol on the Euro-region model, but now we have to wait to understand what direction the new regional government in Friuli Venezia Giulia will take.

Another aspect, which should not be underestimated, is that for big projects, such as those competing for European funds, the necessary partnerships and the scale of operations exceed the capacity of local actors and coordination bodies such as those in the Protocol. This need for broadening of the partnerships must be considered.
Nevertheless, the suspension of the cross-border webpage covering three municipalities, Nolismo.net, seems incompatible with the spirit of cooperation?
Of course, there are setbacks, moments in which cooperation seems to stop, as showed by the suspension of the webpage you mentioned. It is true that the change of local government in Gorizia in 2007 has stopped some initiatives, but I am optimistic. I think it will take a bit of time, but that cooperation will resume. In technical terms, the website required maintenance fees, such as for translation, and availability of personnel, which is not always easy to arrange. In this sense, that investment requires real commitment.

Some in Italy do not think it is that important to collaborate with Nova Gorica. I, however, believe this is fundamental for the region, and we will work to ensure the continuation of full and stable cooperation. In general, the entire border area has embarked on a new phase of cooperation, including Trieste and Sezana, thus it would not make sense if Gorizia and Nova Gorica did the opposite.
What is the rapport of Nova Gorica with the capital Ljubljana? Does this relationship influence cross-border relations?
Above all, it should be said that, as a municipality, Nova Gorica has significant autonomy and can operate independently from the capital Ljubljana. There is dependence on European project funds, which go through the central government, since there are still no regions.

In regards to national policies, sometimes Nova Gorica, which is a municipality but not a large city, suffers because Ljubljana does not pay enough attention to this border area and the people who live here. We hope that the regionalization in Slovenia will finally be completed after the elections, in order to have greater financial autonomy, as for example in Italy, where intermediate bodies, such as the regions, provide strong support for local development. Nonetheless, I repeat that even at present Nova Gorica can operate with full autonomy.
An intense debate on security emerged in Italy that also involved the issue of migration and the control of the borders. In this sense, the Schengen Agreement was criticised. What is your position on this issue as a mayor of a city, which only recently felt the border fall and the freedom of cross-border movement?
The negative feelings about the Schengen and the doubts and opposition to its enlargement are not sensible from our point of view. Even less sensible is that someone fears the dismantlement of this particular border. From the moment of Slovenia's entry into the Schengen Agreement, the problems have been very small; to the contrary, migratory flows have been increasing in the opposite direction, that is, there are many Italians coming to Slovenia. If Italy has some second thoughts, it should not address them to Slovenia. The problems are European and related to more distant borders. This is where action is needed.

Europe should intervene and strengthen its policy with respect to some of the Union's borders, but definitely not in Slovenia. In this sense, we feel that the idea to install cameras in Via San Gabriele in Gorizia to monitor the border crossing is unacceptable. I think this does not help the cooperation between the two cities. In addition, I think that given that the border is completely open along the entire territory, it is absurd to think the problem can be resolved by monitoring one street.

A real cooperation would be, for example, to have the police of the two countries work together and to try to coordinate their efforts. Schengen is a resource, it should not be doubted. The open border surely did not increase crime in the two cities. However this border, the entire Italian-Slovenian border has a huge problem with drug trafficking. This unfortunately cannot be resolved by our municipal policies.
Nova Gorica presents itself as a "university city". Do you think this could be a common trait of a "united city"?
Certainly. We are very proud of our university, born and developed thanks to the opening of several faculties from Ljubljana. Nevertheless, we also consider important the presence of the Universities of Trieste and Udine in our region. Cooperation among universities is fundamental for this region, but not only for allowing Slovenian students to study in Italian universities, as was primarily the case up to now, but also for reciprocal exchange and creating common appeal for foreign students. In this sense, the University of Nova Gorica has already begun with post-graduate programs in English language and environmental studies, with professors coming from all over the world (even China). The Universities of Nova Gorica and Gorizia, beyond just being a symbol of the border that no longer exists, are also conduits for cross-border cooperation.
Beyond projects, commerce, and migration, there is the idea that a common future for the two sides of the border should be created through the construction of a border-culture, a perception of common belonging, the sentiment of having a common place. To this end, what are in your view the major aspects to address?
Just a few days ago, Mr. Carlo Gambacurta, Italy's General Consular in Koper, was in Nova Gorica at the award of certificates for Italian study to Slovenian students. This shows how common the culture in this area already is, even though much more sustained effort is needed.

Before World War I, Gorizia was a city where four languages had been spoken. It is important to work on the possibility to understand each other in mother tongue. For us, both school and TV play an important role for learning Italian. In addition, more and more Italians learn Slovenian in Gorizia, and this is important for collaboration.

Until recently, the Slovenes knew only the shops in Italy and Italians only the casinos in Slovenia. This reality is changing and we want it to change completely. There have been many initiatives for mutual understanding and common activities in the field of culture; such as common theatre tickets valid for both cities, or common leaflets with information on cultural and sports events both in Gorizia and Nova Gorica. A crucial step forward might by the idea for a common paper and TV. More and more people want to share the space of the two cities, starting from, but not only, cultural events.

In my view, cooperation must begin in schools, where ever greater investment is needed. Young people learn in schools about equality, belonging, languages and togetherness. In this sense, the prospect of a common future begins by investing in schools and young people.