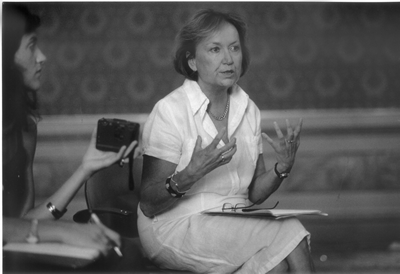 Melita Richter is a sociologist and cultural mediator. Over the last years, she has implemented many projects related to the border between Italy and the Balkans. Their participants have been high school boys and girls. Our interview

It could be said that you have spent much time crossing the borders dividing the northern Adriatic...

I started travelling between Zagreb and Trieste when I was young. My boyfriend was from Trieste and I travelled continuously between these two cities for 13 years. The border between Italy and, at that time, Yugoslavia was extremely permeable. Certainly, it depended greatly on the phases in the political relations between the two countries, but overall there was much exchange and intensive communication. Paradoxically, at that time, many more buses connected Trieste with Zagreb than at present.

Now that the border can be crossed without papers, what does it change?

From this point of view, I do not see a big difference with respect to the past because, I emphasise, this border has always been in my view very permeable. For example, 40 million people have crossed it in 1976; 19 million of these had the so-called "propustnica" following the Udine Accords that promoted cross-border exchange; and 21 million people have crossed it with a passport.

Slovene sociologist Bozho Repe has described very well the masses that were arriving in Trieste. He remembers that on 29 November, the Day of the Republic, 250,000 people arrived in only two days. In the Yugoslavian imagination, Trieste has been remembered as the city for shopping. Many comic books and caricatures depict the arriving buses, the left-behind shopping trolleys, the art of hiding the shopped merchandise in order to avoid the inspection by Yugoslavian customs officials.

Today, nevertheless, I notice a greater cultural openness; more of our authors are being translated. There is greater interest and, importantly, new space is emerging.

Do you think Trieste could now revive and refashion its multicultural character?

Trieste's multicultural matrix has often been emphasised. It is historic and important, but to some extent, it has become a myth. If you analyse its substance, you notice that the same authors are always mentioned; of course, they are important. However, you never hear anything about other intellectuals from the Balkans, such as Ivo Andric or Dositej Obradovic, who contributed abundantly to Trieste. Unfortunately, one reason for this oversight is the war from the 1990s. Overall, the fact remains that the focus of attention was always turned to the West, whereas the culture of the East has been marginalised.

Go to the introduction of the publication

However, as I said, things are changing. The more important initiatives include, for example, the Alpe Adria Film Festival, which each year brings many authors from different countries in Eastern Europe. Or, the days dedicated to Fulvio Tomizza include meetings, conferences, and seminars that importantly, take place both in Trieste, as well as Slovenia and Croatia. In this way, the unity of the territory is being reconstructed - an approach quite present in the writings as well as the life of Tomizza - as a space where it is possible to overcome barriers.

In 2004, you implemented a project involving high schools, which focused specifically on the topic of the border...

It was called "Tell me about the Border". High schools from Gorizia, both Slovene and Italian, took part; a lyceum from Monfalcone and one from Nova Gorica in Slovenia. The young participants could attend seminars and afterwards they met and wrote essays reflecting on the historic moment of Slovenia's entry into the EU.

This was an intense experience because nothing was only rhetorical. Everyone spoke their minds and expressed their concerns. For example, the Slovene students did not hide their fears over their small country Slovenia entering into the big European Union. Would it manage to maintain relevance? Would it preserve its cultural identity? Much criticism of the EU was expressed: some asked if it was solely an economic union, if the European dream was a big bluff... There were arguments concerning the relations between the Italian and Slovene communities and the still existing difficulties that could not be denied. The answer given by the youth pointed to the importance of communication and dialogue.

Some of the essays, obviously, convey the plural identity of people in these lands. How do young people perceive it? Are plural identities seen as richness or simply as a disorienting factor?

Young people often perceive the plural identity as inconvenience. In order to prevent this from happening, the wider cultural environment, primarily the schools, should promote it as a virtue. However, we cannot think that diversity is automatically a virtue. These issues need to be addressed together with the youth, and perhaps this would allow us to overcome divisions, which unfortunately are often promoted by the older generation.

The elderly are the subject of a publication produced in 2008, together with girls from high schools...

The title of the project is important, "From Borders to Bridges". It denotes borders and bridges between countries but also between generations. This project supported by Associazione di Cooperazione Cristiana Internazionale (ACCRI) helped a group of female students interview their grandmothers and collect many testimonies of women from along the area of the border, both in Trieste and the other side. This involved a transfer of knowledge and experience between elderly and the young, which seldom takes place in a family, and which prevented the loss of a precious heritage.

We have collected 42 interviews: voices emerging from the shadow of a difficult past: from WW I to the period of fascism; from WW II to the postwar years. These rich narratives invite historic and sociological analysis. However, the most important fact is that, for the first time, someone has asked these women about something from their past. The young lives of these women emerged vividly; their childhoods, their loves, ideals, points of view, marriages - the things that they have kept over the years.

Was it a surprise for you that these female students managed to produce such articulate and in-depth interviews?

With the interview, you establish a relationship with the interviewee. It is not a questionnaire, an impersonal tool of sociology. We were in a privileged situation; the relationship already existed. And, the grandmothers were motivated to tell their granddaughters about their lives.

Naturally, there was some self-censorship; there were certain parts where the student had noted, "My grandmother did not tell me everything because she couldn't, and I didn't want to open her wounds." However, this is natural.

It should be added that the work with the teachers was also important, because they managed the step from the project's theoretical frame to having the girls establish the link with the grandmothers, and in this way avoid a dramatic intrusion in their lives.