ECPMF sent a letter of concern to the President of Ukraine 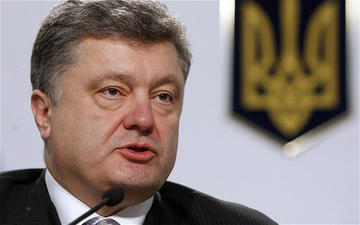 The European Centre for Press and Media Freedom, in a letter to President Petro Poroshenko, expresses concern about the safety of journalists in Ukraine

The European Centre for Press and Media Freedom (ECPMF) is concerned about the safety of journalists in your country and we strongly urge you as president to make sure that your government and all its institutions react to threats and violence against journalists.

The background for this letter are several incidents this summer:

On September 4th, one of the most popular TV stations in Ukraine, Inter TV, suffered an arson attack after weeks of threats in the internet. One of its staff was seriously wounded. The police arrested six persons and let them free again after classifying them as witnesses, not offenders.

On August 3rd, your Deputy Minister for Information, Tatiana Popova, resigned “because I don't agree with attacks on journalists and attacks on freedom of speech by individual politicians. I cannot tolerate the absence of a proper reaction to these attacks".

On July 20th, the journalist Pavel Sheremet was killed by a car bomb. According to Ukrainian press reports the police still has not got a clue about who did it.

On July 19th, the journalist Maria Rydvan was attacked in a park in Kyiv and stabbed three times. The attacker has not been found.

In May this year the nationalist website Myrotvorets published the personal data of more than 5,000 Ukrainian and foreign reporters and fixers who applied for press passes issued by separatists and branded them “terrorist collaborators”, based on material hacked from servers in the area controlled by separatists.

The site was launched by the ex-Governor of Luhansk, Georgiy Tuka, who is now Deputy Minister for temporarily occupied territories in your government. To add injury to insult, your own Minister of the Interior, Arsen Avakov, welcomed the publication of the list. This is both absurd and dangerous for professional journalists who are doing their job – namely finding out what’s going on and publishing it.

According to the Institute of Mass Information in Kyiv, the Ukrainian Prosecutor-General’s Office logged 113 criminal offences – including physical attacks, damage to property, and obstruction of activities – committed against journalists in the first half of 2016. According to Ukrainian colleagues, this is just the tip of the iceberg.

Violence against journalists is not a new phenomenon in your country, Mr. President. The Kyiv Post has compiled a list of more than 50 Ukrainian journalists who have been killed or who died under suspicious circumstances since Ukrainian independence in 1991.

Mr. President, your government has committed itself to reforms which will lead to a more democratic and transparent Ukrainian society. We hope that as part of this agenda you will give priority to the safety of journalists and to solving the cases of violence against journalists, photographers and other media professionals.

It is desperately needed.