Smear campaign against the Serbian Ombudsman 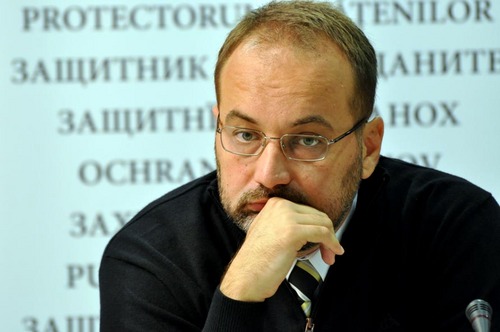 Serbian Ombudsman Saša Janković has been under attack for months. A campaign orchestrated by government circles and the media close to them has been trying to denigrate both his function and his person. An analysis

"I will never support the initiatives put in place by my party aimed at dismissing Ombudsman Saša Janković within 24 hours", said Aleksandar Vučić, current Prime Minister and leader of the Serbian Progressive Party (SNS). This statement may look like an attempt to defend the institution of the Ombudsman from the brutal media and political  attacks Janković has faced for months now, but it is actually part of that very smear campaign.

The Prime Minister has not even attempted to oppose the ongoing campaign against the Ombudsman – in fact, he has not missed an opportunity to warn that he has the power to remove him. By describing the Ombudsman as a political opponent, Vučić implicitly revealed the true motives of this well-orchestrated campaign that directly involves some of the highest government officials and members of parliament. This suggests that pressures on Janković will not cease and that an agreement between him and the current government will not be reached easily or quickly.

However, Janković will not be dismissed, primarily because Vučić has reason to believe that this decision may arouse strong disapproval in Brussels and Washington, that have repeatedly urged the Belgrade authorities to give full support to the Ombudsman, never mentioning his removal as an option. This war against the Ombudsman will remain limited to pressures and attacks, as authorities are probably convinced that these actions will be tolerated.

The intensification of the campaign against Janković began a few months ago, following his decision to investigate an incident occurred during the last Gay Pride in Belgrade, when Vučić's brother and his escort, made of members of the special unit "Kobra" of the Military Police, clashed with some agents tasked with the security of the event. Immediately after the incident, the Prime Minister said that his brother had been brutally beaten, while the Ombudsman also ordered an investigation into the conduct of the military police who accompanied him.

The campaign against Janković has recently focused on a widespread, blatant manipulation of data from police files, aimed at framing the Ombudsman as responsible for the death of a friend who committed suicide 22 years ago by shooting himself in the head. Janković was a 23-years old student and the owner of the gun. By revealing to the public some details extracted from the case file, Interior Minister Nebojša Stefanović implicitly suggested that the Ombudsman may be guilty or at least responsible for what happened.

Stefanović made an explicit comparison between the incident of 22 years ago and the one that occurred during the Gay Pride, specifically referring to that part of the Ombudsman's report which states that a loaded gun, belonging to one of the military policemen escorting Vučić's brother, had fallen to the ground during the clash with the police. "The minister said that I wanted to deal with other people's guns, but would not let others take interest in mine", said Janković in an interview with weekly newspaper Vreme.

This last attack against the Ombudsman, launched by tabloid Informer – which is directly influenced by circles close to Vučić – relies on some documents stating that 22 years ago, when the police arrived at the apartment where the suicide had taken place, Janković was not in possession of a licence for the gun used to fire the fatal shot.

These documents do come from police archives, but they represent only part of the existing documentation on the case, which was the subject of a detailed investigation by the police and judicial bodies. Such documents were leaked by someone within the police with the clear intention of supporting the current campaign against the Ombudsman. However, the claims about the lacking licence proved false, as even the police had to admit indirectly, by making public other documents proving that Janković held a regular licence.

At this point, the media in charge of the campaign simply dropped the alleged illegal possession of the weapon and moved to another document reporting that the "paraffin glove" technique had revealed the presence of gunpowder traces on Janković's hand. This too, however, proved to be a half-truth, since those turned out to be minimal traces that could have been created by the contact with something in the apartment or the victim. The investigation also confirmed that Janković was not in the apartment at the time of his friend's death, but only arrived 15 minutes later.

Yet, minister Stefanović and other government officials have continued to criticize the Ombudsman, ignoring accusations by the opposition and the non-governmental sector of manipulating data and files to discredit a person who is doing work that bothers them. The minister said that the investigation will not be reopened because there is no legitimate reason to do so, but left open the possibility that maybe that was not a suicide.

"If I were not personally involved in this matter, I would have already initiated proceedings against the Ministry of Interior for misconduct towards citizens, including the violation of the right to respect for private and family life, to privacy, and to protection of personal data as well as the infringement of the principles of objectivity, impartiality of the administration, and presumption of innocence", said the Ombudsman.

The ongoing campaign has a clear political connotation. Shortly before the outbreak of the last offensive against the Ombudsman, research by two leading agencies that deal with public opinion polls showed that Janković occupied the fourth and fifth place in popularity rankings. Immediately, government circles reiterated allegations about the Ombudsman doing politics rather than his job.

Janković, 45, is currently carrying out his second term as Ombudsman, scheduled to end in 2017 (which is also the year of presidential elections in Serbia) and will not be able to run for the same post. On the other hand, the government coalition and – especially – Vučić's party have a strong interest in hindering the emergence of a public figure that may have even just a small chance to enter the electoral race for one of the most important political posts.

The fact is, though, that in this unequal confrontation with the authorities and institutions he is tasked with monitoring, the Ombudsman managed to defend himself and earn the empathy of a large part of the public opinion, especially among the educated middle class. Non-governmental organisations and many intellectuals are strongly supporting him, both on social networks and on conventional media, while the circle of those who continue to impudently attack him remains restricted to members and MPs of the majority party and some blatantly pro-government media.

As this campaign against Janković has proved by now to be poorly prepared and poorly led, government circles are now facing some sort of crossroads. Thanks to their smear campaign, the figure of the Ombudsman has now taken a political connotation in public discourse, while Janković himself has managed to preserve his civil servant status in the media.

This combination of circumstances is quite embarrassing for Vučić and his government, that would undoubtedly rather have the option of dismissing the Ombudsman. However, they need to refrain from resorting to this, both because this move would not be welcome in Brussels and Washington and because the public's support for the Serbian Ombudsman is growing. From this point of view, the continuation of the campaign can be expected to focus on "damage control" to manage the results of the careless way allegations were launched rather than on finding a strategy that can make the premier Vučić fully satisfied.