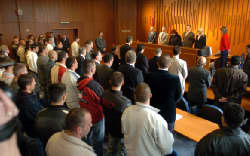 The most traumatic case in Macedonian judicial history, the "Rastanski Lozja" case, came to an end. The senior members of the Macedonian intelligence and police, accused of murdering six Pakistani and one Indian in 2002, to present it as an act against international terrorism, have been all acquitted

"The defendants are being acquitted and their detention is suspended". This was the verdict of judge Slavica Popcevska in the controversial case of "Rastanski Lozja", pronounced last Friday in Skopje.

The judge could not finish the pronouncement due to the euphoria that discharged in the courtroom and asked for exclusion of the audience. General Goran Stojkov, one of the defendants facilitated the reestablishment of order asking the spectators to calm down.

The mass continued the jubilation in the corridors, then in front of the court, and two hours later in front of the detention prison from which the four detainees were immediately released.

This ends the major chapter of the undoubtedly most traumatic case in Macedonian judicial history. Aleksandar Cvetkov, Goran Stojkov, Mitko Kikerekov, and Boban Utkovski were arrested on 28 April 2004, on suspicion of murdering with premeditation 7 foreign citizens, six Pakistani and one Indian, on 2 March of 2002, with the aim of presenting it to the international community as an act against international terrorism.

The main indictee in the case, former interior minister Ljube Boskovski was arrested in Croatia where he had fled to, hoping to find shelter behind his dual citizenship. Croatian authorities shelved the case against him in favor of the priority of the international indictment by The Hague ICTY brought against him earlier this month for another case involving responsibility over killing of civilians.

"This is a brave verdict by the Court. It is victory for Macedonia" stated briefly Aleksandar Cvetkov upon leaving the detention prison. He was the only defendant to make a statement.

Cvetkov, a chief of Macedonian intelligence, defended himself during the process by silence, in order not to compromise, as he said, the work and the identity of his colleagues. He only used his right to make a closing argument. He was the principal indictee, accused of having masterminded the entire operation together with former minister Boskovski.

"I will make a statement. First I need to pull myself together" briefly said general Stojkov, as he was being quickly ushered into a car by his friends. As a commander of the special police forces, he had been charged as the leader of the group that committed the elimination.

"The verdict is strong and it confirms that there is judiciary and justice in Macedonia" said Milorad Martinovski, one of the attorneys in the proceedings.

The trial lasted for five months and had more than 20 consecutive sessions. The court heard the testimonies of more than 30 witnesses. Throughout the entire period of the investigation and the trial the accused were held in detention - almost for a period of 1 year. The judge several times denied the pleas to let them defend themselves from freedom as it might have allowed them to coordinate statements.

Judge Popcevska, who has more than 20 year of experience, was welcomed by all parties involved, from the very beginning of the proceedings - as the right person to handle such a complicated case. Immediately after the verdict she took a leave of absence due to physical and mental exhaustion.

In the end the prosecution did not succeed in making the charges hold. "The Court pronounced the verdict arguing that there is ground for acquittal from criminal responsibility, that is, that the accused committed the crime in error. This verdict to us is incomprehensible and we will appeal it", said Skopje public prosecutor Sterjo Zikov.

From the very moment it started the case was a constant national preoccupation and it was followed by unrest, disorder and continuous security risk. Demonstrations, police interventions, bomb threats, intimidations by alleged Macedonian terrorist groups, warnings to the authorities by the colleagues of the accused from the former special "Lions" police squad.

The case joined the "war criminal" drama of the post-conflict societies of the Balkans with the fact that it burned the hurt national pride of a party involved in the conflict - in this case the Macedonians. As much as one can detest and condemn a scenario involving cruel waste of human life, in a lack of hard evidence, he/she can, even if secretly, sympathize with the fall from grace of the people who were the protectors of their side.

The court said there is no evidence, thus the truth to this day remains unknown. It is unlikely to expect that the continuation of the proceedings will bring in new moments which could revert the course of events or come with new revealing conclusions.

At the time of the killing former minister Boskovski said the people were terrorists who had planned attacks on foreign embassies, and were eliminated in a shootout. It was originally a foreign newspaper, the Wall Street Journal several months later that suggested that the people killed were economic migrants. In a follow up a Greek paper identified and interviewed relatives of theirs in Greece, who the killed were reportedly on their way to join.

In an act of revenge for their deaths, the Macedonian consulate in Pakistan was set on fire and three people were killed in December of 2002. Pakistan authorities later on arrested a group of suspects related to a terrorist group.

The investigation over Rastanski lozja (Rastani vineyard) was originally commenced by Boskovski's successor at the post of minister of interior, Hari Kostov, who successively became prime minister. Kostov originally came up with the conspiracy charges saying that the people were abducted by the Macedonian police, kept in a flat in Skopje for several days, and than taken to the preset location where they were executed and planted with weapons to make them look like terrorists.

Boskovski is today a detainee of The Hague Tribunal whereas Hari Kostov withdrew from politics after his demission from the prime minister's post end last year.

Government officials as well as foreign diplomats in Skopje did not comment the verdict not wanting to influence the further proceedings.