Politicians on trial: the Buckovski case

Macedonia: Difficult Times Ahead of the Social Democrats 11/08/2006 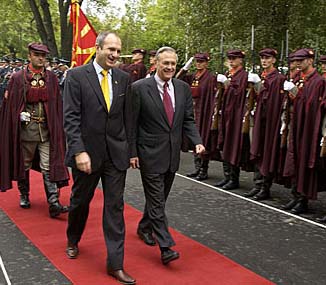 Mr. Buckovski is the first ever former prime minister to appear before a judge and answer to charges, since the Macedonian parliament voted to strip his immunity after a heated debate between mayority and opposition parties

Early this week, on 20 August, Macedonian parliament voted to strip immunity of one of their own, former prime minister and at present MP of the opposition social democrats (SDSM), Vlado Buckovski. In what was the culmination of 3 weeks of political turmoil following charges against Mr. Buckovski for abuse of office, parliament said the former prime minister should be made fit to stand to charges.

The parliament majority thus confirmed the controversial decision of the Committee on mandates and immunities of 1 August, to strip Mr. Buckovski his immunity and make him liable to prosecution.

Mr. Buckovski is the first ever former prime minister to appear before a judge and answer to charges.

According to the charges, in 2001, while in charge of the Ministry of Defense, Mr. Buckovski ordered from MZT a huge quantity of spare parts for old tanks type T 55, reportedly 4 times than what was necessary. General Stamboliski signed the procurement order. Soon after the order, the army has decided to decommission, in line with NATO needed reforms, the old tanks. By the time the spare parts were delivered, they were completely redundant. The army returned them to MZT, but the factory would not accept them. It insisted on getting its payment and managed to obtain it through compensation deals authorized by minister Vlado Buckovski. Now financial authorities claim it was all part of a scam to embezzle close to 3 million euro.

"By doing this the accused have misappropriated 3 million euro of government money" said the spokesperson of the Ministry of Finance, Martin Martinovski.

General Stamboliski and the director of MZT, Mr. Petkovski were swiftly detained. Former prime minister Buckovski was protected by immunity, as member of parliament.

Late evening hours on 1 August, the Committee on mandates and immunities held an urgent session to revoke Mr. Buckovski's legal shield. The session turned into something akin to a fight between the ruling VMRO and opposition SDSM. The committee chair, Ms. Svetlana Jakimova, member VMRO, after some discussion, declared Mr. Buckovski's immunity was revoked. The committee members from the opposition social democrats and Mr. Buckovski's party fellows, said the meeting was not over and wouldn't let the chair person out of the room. Rough words were exchanged and according to news reports, committee members threw bottles at each other.

The next day SDSM pressed charges against Ms. Jakimova on grounds of having abused her powers as a chair. She retorted a couple of days later pressing charges against four SDSM members on account of not having let her leave the room.

Likely not by chance, the committee convened while Mr. Buckovski was out of the country, for holidays in Greece. Quickly summoned by his colleagues though, he made a belated appearance before the committee. He said he was late because police held him at the border. "Illegally" he said.

"I am after all present at this meeting, although I know that in the script you had I was supposed to be absent" said Mr. Buckovski to the committee chair.

After the midnight committee hullabaloo which went on in the media the next day, on the morning of 3 August, Mr. Buckovski appeared before a judge, to decide whether he should join the other two in detention. A first one for a former prime minister. Simultaneously, SDSM activists gathered in protest before the court. Democracy is under attack, they said, and asked that OSCE be present at the hearing. An OSCE rep showed up but could not sit in; only defendant and legal council, according to the law.

After seven hours of hearing, judge Katica Jovanovska decided Mr. Buckovski could defend him self from freedom. He does not have to be put in detention. The court ruled he should turn in his passport and is not to leave Skopje.

Mr. Buckovski walked out of the court as a hero, to the cathartic rejoice of the gathered crowd.

"We won the battle for freedom. The battle for democracy and for rule of law continues", stated Mr. Buckovski from in front of the court, "I will defend myself from freedom".

According to his legal council, attorney Nikola Polenak, Mr. Buckovski presented a good defense before the judge; had good argument on each count, and even presented evidence that the prosecution hadn't known.

Mr. Buckovski was charged on the same grounds in 2002, by then interior minister Ljube Boskovski, currently himself standing a trial for war crimes at The Hague. Back than, the charges were not accepted by the prosecutor and the case didn't get to court.

"This was already done once and the charges didn't stand" kept saying Mr. Buckovski. According to him, this was a politically staged persecution by the government.

" They underestimated SDSM. They thought we could not unite" said the former prime minister.
Mr. Buckovski had fallen from favor with the social democrats after taking a separate way from his political mentor, president Branko Crvenkovski, and he was almost expelled from the party not long ago.

"Faced with this threat for the country, SDSM will overcome personal vanities and it will unite" exalted Mr. Buckovski, who in exchange for criminal charges seemed to have regained the support of his party affiliates.

Finally, members of parliament regretfully cut their holidays short to gather on the 16 August and discuss the repeal of their colleague's immunity. After a couple of days of heated debate, the VMRO majority stripped Mr. Buckovski's immunity. The opposition did not vote.

According to legal experts, the whole conundrum happened because the law was unclear whether the committee alone had the powers to revoke immunities or it was ultimately to the parliament.

Whereas the social democrats saw the events as an attack on democracy, some commented that Mr. Buckovski saved himself from detention only because he is a politician, and that the court had double standards.

Trial should follow soon. A first one to involve a former prime minister.

Likely not a last? The case sets a strong precedent in Macedonian jurisprudence. Other politicians should beware.