On a roller coaster 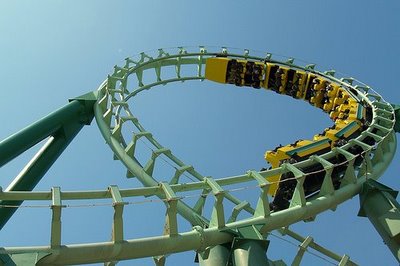 Macedonia is on a roller coster. Too much is happening all at once. Mr. Matthew Nimitz, UN envoy on the name dispute, unveiled three new proposals, the government fell and was stitched back together. But the Bucharest summit is approaching, and time is counting down

Macedonia is on a roller coster. Too much is happening all at once. The government fell, ...or did it not? UN envoy on the name dispute, Mr. Matthew Nimitz, unveiled yesterday in Vienna, three new proposals...or were they old ones actually? Time is counting down, and crushing everything in the way.

There are just few days left till the NATO Bucharest summit scheduled for April 3, when Macedonia will know whether it is in or out in the cold. It cannot get in without a painful compromise with a relentless Greece. If its stays out, it will stay isolated and bitter (remember Serbia?), and nationalism will inevitably rise. The pressure is becoming unbearable.

In a last round of frenetically intensified negotiations on the name dispute, Mr. Nimitz suggested yesterday in Vienna three proposals: Republic of New Macedonia, Upper Macedonia, and (Cyrillic transcription) Republika Makedonija (Skopje). These are the only three options Greece would be willing to consider as a name "erga omnes", that is, for all international uses.

Macedonia does not like any of these. It insists on its position there should be a dual formula - one name for Greece, and Republic of Macedonia for everyone else. These has been Macedonia's position for the last 15 years give or take, with few second thoughts about possible concessions.

Greece has used this to claim Macedonia was inflexible. Athens says it conceded over time that Skopje can actually use the name "Macedonia", something which in the beginning it absolutely rejected. Skopje has stayed stubborn and unwilling to compromise, Greece said.

Macedonia could agree on an "adjective" which is a further description of its political system, such as "Democratic Republic of Macedonia". President Branko Crvenkovski suggested this several times over the past week.

"Even the word "Republic" is as a matter of fact a similar "adjective", said Mr. Crvenkovski.

In essence, Macedonia feels such an adjective does not infringe on the Macedonian identity, such as for example the word "New" which would be taken to imply, that Macedonia was created by Tito, it is an artificial creation without sound ethnic-national basis, and that thus, there is no such thing as Macedonians.

However, Greece said it would not accept "democratic" as an adjective.

"Demonstration of our willingness to accept "democratic" leads as nowhere", said the other day Prime Minister Nikola Gruevski. "Greece already said it was not an option", said he.

Yet, perhaps there was a slight progress in Vienna. Greeks seemed optimistic after the meeting.

The United States is pushing strongly for a solution. It wants Macedonia inside NATO as part of its plan for stabilizing the Balkans. Europe is more indolent and of course divided. Some countries openly support Skopje; others Greece; most try to keep a balance.

Macedonia will have to define its position on Mr. Nimitz's proposals by the end of this week. Next week another round is expected, according to some, it is even possible US President Bush steps in directly.

Neither Prime Minister Gruevski nor President Crvenkovski seem, for the time being, optimists about these proposals. There is nothing new, they said. These have been floated back in the 90s.

Yet the opposition and experts warn the government to find the strength to compromise. Staying out of NATO will mean serious trouble, said they.

Some of the experts suggested the government should consider Republika Makedonija (Skopje). They say that proposal passed through Parliament in the mid 90s, so politicians needn't fear they were "selling out".

To make everything "easier", the government fell last week. Democratic Party of the Albanians (DPA) leader, Mr. Menduh Taci, practically out of the blue, said his party was leaving the coalition.

Mr. Taci said he was not happy with the treatment of Albanians by this government. He had a list of 6 items including use of language, etc. he said were not solved.

Prime Minister Gruevski lost his base of support. Leaders of all major political parties, Mr. Taci included, had a meeting and decided they would support Mr. Gruevski's minority government until the NATO summit. The next day, Mr. Taci also declined on this one. His ministers did not attend the government session, and Mr. Taci himself went for a trip abroad.

"Does Macedonia have a government? Is there a pilot in the plane?" people started asking.

Greek Prime Minister Kostas Karamanlis said Macedonia should not use this as an excuse in the negotiations.

Analysts started commenting the final demise of Mr. Gruevski's politics. This is too much for him, they said. He does not have the leadership capacity to deal with a situation like this. The government is on its way out.

But by the time the analyses went to press, the government was stitched back together. Mr. Taci calmed his voice, bashed up some of his own people for having acted without authority, and seemed to have made up with Prime Minister Gruevski.

There was something awkward about the whole thing. Democratic Union of Integration (DUI), the Albanian opposition block, were perhaps the only ones to see it through.

"This is a hoax", they said. VMRO and DPA are playing games.

It is very possible Mr. Gruevski and Taci played a political maneuver. After all, it would not be the first time. They pulled a similar stunt to keep DUI out of the coalition, back in the 2006 post-elections.

It is perhaps strange that people fell for that. But what is more important is whether this is the right time for such action and can such action be of any help?

It can buy some time in the negotiations, with the foreigners...time, such as for example 2 weeks till the NATO summit.

But what if your game is blown? One risks not to look serious.

The time is now. There is no other time. Somebody needs to make the call. Perhaps staying out of NATO will not mean death to Macedonia as gloom tends to portray it these days. But nor will a change of the name erase Macedonian identity for that matter.

Somebody needs to make the call. It should be a smart one.