Macedonia: He who sings means no evil 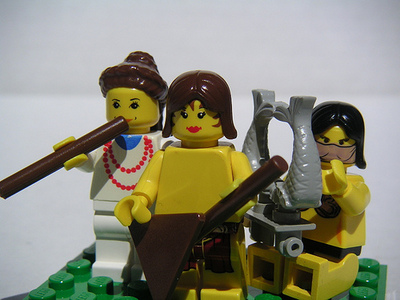 Recently, a group of young protesters from Skopje seems to have chosen music as the credo of their civic and political activism. They protest by singing. They call themselves Raspeani Skopjani [Singing Skopjans], and their popularity has been growing﻿

An old, frequently invoked Balkan proverb says, “He who sings means no evil [ko peva zlo ne misli]”. The expression denotes the benevolent attitude of those that joyfully croon a melody.

Recently, a group of young protesters from Skopje seems to have chosen this proverb’s philosophy as the credo of their civic and political activism. They protest by singing. Their popularity has been growing.

They call themselves Raspeani Skopjani [Singing Skopjans], a common name for town choirs. For several months, they have been entertaining the residents of the Macedonian capital and shaping public opinion. They show up unannounced, usually on weekends, at a specific (usually politically pertinent) location, they sing a tune, and then disperse. Their appearances are recorded and posted on YouTube, as well as other websites. Their impact results from carefully chosen songs that respond to certain political event. Thus, the choir’s performances are ironic, witty, and increasingly the subject of discussions.

During the 2009 local election campaign, politicians hungry for publicity put forth all sorts of ideas. The successful candidate for mayor of Skopje, Koce Trajanovski, proposed to repair the city clock at the old train station, now serving as the city museum. Many perceived the weak proposal as a political gaff.

The broken museum clock points to 5:17, the time when, on 26 July 1963, the city was destroyed by a terrible earthquake, probably the most traumatic event in Skopje’s recent history. The clock’s stillness has strong emotional significance for many. Furthermore, Mr. Trajanovski had suggested making the clock play a Macedonian traditional song every hour.

Rather than reacting angrily to the distasteful idea – which many columnists did – Raspeani Skopjani, appeared one morning in front of the old train station, and sang the song “Time Machine [Vremenska masina]” by a Macedonian pop band, Nokaut. The irony pointed to what they (and many others) probably felt was political folly.

Apparently, the freshness of the protest’s expression caused it to be remembered much longer than other protest responding to the same event. The angry newspaper columns have been forgotten. People still talk about Skopjani’s performance.

The Macedonian public recently engaged in a large controversy over the publication of the first national encyclopaedia by the country’s highest academic institution, the Macedonian Academy of Arts and Sciences (MANU). The book was perceived as amateurish and full of inconsiderate statements, which many at home (Albanians) and abroad (the United States, United Kingdom) found offensive. The event has preoccupied the Macedonian public for months.

Raspeani Skopjani showed up in front of MANU early October and sang “Whose Are You [Cija si]?”, a Macedonian folk classic. They questioned whether the academics knew what they were doing.

In a sad tragedy, the monks’ residences at one of Macedonia’s most beautiful monasteries, St. Jovan Bigorski, recently burned to the ground, apparently because of old electric wiring. A public fundraising appeal sought to help the church reconstruct the lost national treasure; unfortunately, the response was insufficient. Some people accused the church of not having taken good care of the monastery. Others used the occasion to point to the use of church money for personal luxury, such as villas and expensive cars.

In a satire pointing at the non-transparency of church finances, Raspeani Skopjani appeared in front of the main church in Skopje and sang a Janis Joplin classic, “Oh Lord, won’t you buy me a Mercedes Benz”.

Raspeani Skopjani marks significant events with performances. Early in the morning on 19 December, with temperature at minus 10 degrees, they appeared in front of the parliament building and sang “Freedom” by George Michael. The government had organized a trip for a group of politicians and citizens to Paris, to mark the visa liberalization effective 19 December. The choir wished them a safe trip.

The recent positive European Commission report on Macedonia’s progress on accession to the European Union, was celebrated with Toto Cutugno’s “Unite Unite Europe”. Several civic groups recently organised a march for tolerance as a substitute for what should be a gay pride parade. The choir saluted the event with the song “Kill Me” by a local band, Bernays Propaganda, obviously pointed at groups which promote intolerance. Skopje’s mayor, Koce Trajanovski, was again targeted recently, when he cut the trees along a central street, Ilindenska, which he wants to reconstruct. The Skopjans sang him Monthy Python’s “Lumberjack Song”.

No special occasion is needed to react to Macedonian-Greek relations. They have long been the foremost, ever-present political issue. The singing protesters recently gathered in front of the Greek embassy in Skopje and sang a Macedonian cover of the famous Greek song ‘Dirlada”. The lyrics describe a cross-border love story hindered by the visas.

Some Raspeani Skopjani members also belong to other new youth civic groups, such as Plostad Sloboda [Freedom Square], which have been struggling against the government’s controversial idea to build a church on the main square. The choir also sang in response to this event. Nationalist thugs beat some Plostad Sloboda activists while they protested against the church-building proposal.

Raspeani Skopjani refreshes the Macedonian civic scene. While avoiding direct confrontation and yet being equally, if not more, effective by cleverly using political irony, they manage to send their message and engage public opinion. If creative civic activism indicates political maturation, then Macedonia finally has signs of success.