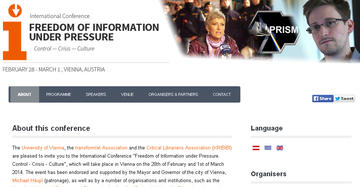 The conference Freedom of Information under Pressure. Control - Crisis - Culture brought together more than 30 academics, experts, journalists and politicians from Austria, Belgium, Bulgaria, Germany, Greece, Spain, Sweden and the United Kingdom, as well as representatives of different organisations, such as the OSCE and the International Press Institute.

The panel discussions focused on topics, ranging from surveillance and whistle-blowing, to the right of access to information and public knowledge, and to policy reform and advocacy.

In their joint address, investigative journalists Augustine Zenakos and Mariniki Alevizopoulou of Greece's UNFOLLOW magazine spoke about cases of media in their country having faced pressure from powerful actors or of being used for political gains. One example was the 500,000-euro defamation suit lodged by a Greek oil tycoon against their magazine and the author of an investigative report it ran in February 2013 about alleged large-scale tax evasion via the sale of shipping oil.

"I sometimes get the feeling that the kinds of things we are reporting are almost not believable to people that live outside Greece," Zenakos said for Austrian national radio station FM4.

In her remarks on the state of media freedom in Bulgaria, Stanka Tosheva, editor-in-chief of Sofia-based Capital weekly, said the media environment in her country was plagued by several negative trends. Those, according to the abstract of her speech, included "continued threats to press freedom, pluralism and media diversity through political and economic dependency of most media outlets; strong pressure by the political and business elite on editors and unscrupulous interference with the work of individual journalists".