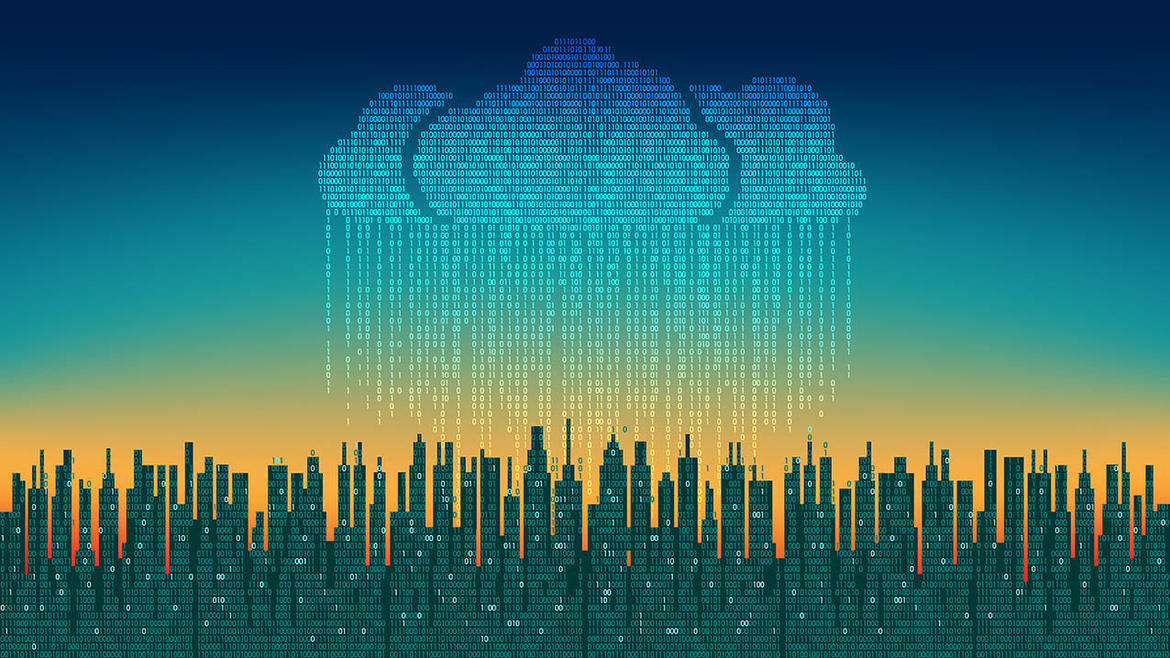 The giants of Silicon Valley are taking in 70% of the profits generated by cloud computing in Europe. Despite the problems thrown up by GDPR, some of this money continues to flow through beefy public contracts

It was a public-private venture designed to kill off the technology dependency of the European Union. In the middle of 2020, more than twenty German and French companies announced the creation of Gaia-X, a federated, pan-European company tasked with building cloud computing infrastructure that was home-grown and independent from the tentacles of US Big Tech.

The platform received the almost immediate support of the President of the European Commission, Ursula von der Leyen , who also confirmed that the cloud computing sector would receive funding from the NextGenerationEU recovery fund. After almost two years, the project seems to have stalled and has only really made a handful of stand-out breakthroughs. It is, however, one of the latest examples of the EU’s attempts to kick start its technological sovereignty: thousands of businesses, institutions and governments already depend on tech giants like Amazon, Google or Microsoft for cloud technology.

While Europe has clashed with North America’s technological superpowers in recent years – Big Tech has been forced to pay hundreds of millions in fines due to GDPR breaches and breaches of competition law  – it does not change the fact that Europe is still a lucrative market for Silicon Valley: in 2020, Amazon posted a record turnover in Europe , while Microsoft – headquartered in Ireland though with much of its profits transferred to Bermuda – posted profits of around €260bn in Europe .

Yet even at a point when the relationship between European regulators and the technology giants is getting more and more frosty, a large proportion of their profits come from public sector contracts and tenders, paid for by local authorities and EU institutions.

According to data published by the Official Journal of the EU and used by EOM for this article, both Amazon and Microsoft have collected around €207m collectively since 2016 from six public contracts with the European Commission and other European institutions, in many cases with little or no chance for competitive bidding.

Microsoft has been the principal beneficiary of the EU’s tender system, with five contracts worth around €148m. Amazon entered the fray in 2020 and, although it only has one contract to its name, it is worth around €58m.

The data available in the digital version of the Official Journal only goes back to 2016, though the relationship between European institutions and the tech giants goes significantly further back: in 2011, Computer Weekly reported that Bill Gates’ company had entered six agreements with the Commission going back to 1993, when there was no chance of competition from the other companies.

In the case of Amazon, a study carried out by the trade union UNI Europa showed that the presence of technology companies receiving public contracts grew in step with the increased needs of the European institutions: between 2018 and 2021, Jeff Bezos’s multinational made a little less than €1.3bn in European public contracts, the majority of which were with the United Kingdom.

The UNI Europa study also showed that Amazon dominated tenders for cloud computing through its subsidiary, Amazon Web Services, which took in 90% of public contracts in Europe for the technology.

Cloud computing, in fact, has become one of the cornerstones of American tech software in Europe , with American companies filling half the global market and viewing Europe as a particular goldmine for the technology.

According to a study done by the Synergy Research Group , the European demand for cloud services has multiplied fourfold since 2017, generating quarterly profits of €7.3bn. While European companies have also increased profits, no one has benefitted from the explosion in cloud computing demand like the North American tech giants, who continue to take a greater and greater share of the Old Continent’s market. 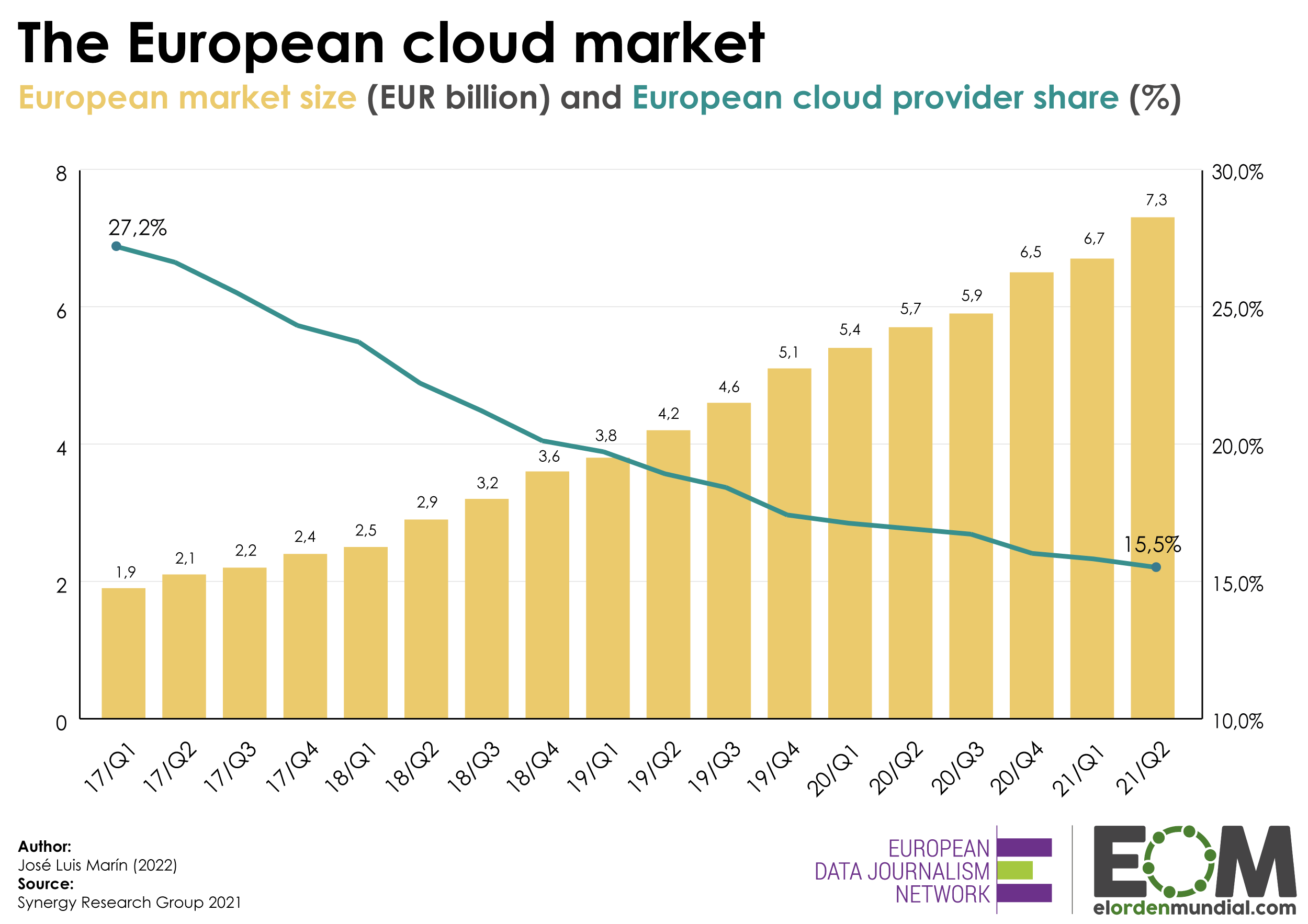 According to this data, in the last four years the market share of European companies in cloud computing has fallen by more than 10%, from 27% to 16%. The European company with the largest share is Deutsche Telekom, with only around 2% of the market, while Amazon, Google and Microsoft make up almost 70%.

The creeping Big Tech oligopoly in the cloud sector is not the only thing worrying the increasingly tech dependent European institutions.

Even without new contracts, the numerous contracts that have recently been signed with North American tech companies are already subject to investigation by the European Data Protection Supervisor (EDPS).

In 2018, to coincide with the introduction of GDPR, the EU data protection body put in place a guide for EU bodies in using cloud computing . Since then, the EDPS has been active in raising the alarm surrounding public contracts.

In April of 2019, for example, the EDPS opened an investigation into European Commission contracts signed with Microsoft and preliminary conclusions have already found that the agreement may have fallen foul of GDPR.

This was reinforced by a European Union Court of Justice ruling in July 2020 which annulled the Privacy Shield, the legal mechanism which was used to transfer data between the EU and US, due to lack of assurance. Under the new ruling, the regulatory body mandated the European institutions to actively inform users of a data transfer to third party countries, and in May 2021 it announced that two investigations were under way into Commission contracts  – one for software, the other for cloud services – with Amazon and Microsoft.

Even at this point, the EDPS’s new regulations still confirmed the EU’s chronic tech dependency , with some “European institutions using more and more software and cloud services from the tech giants”, especially those based in the US.

The reality is one that the Silicon Valley giants know well: while European projects like Gaia-X are in their nascent phase and are only facing small development difficulties, Big Tech is still the dominant force in European public tech contracts .